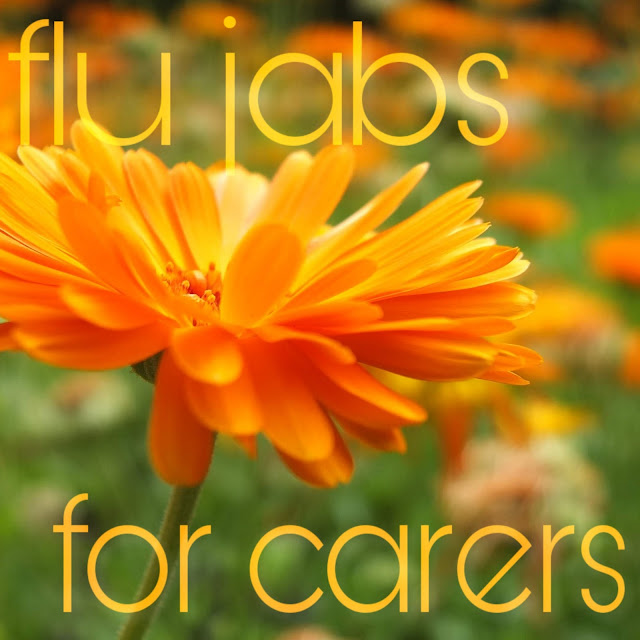 Yes, already.  I know.  Sunshine outside - well, there has been today anyway, and yet I'm talking flu vaccinations (but I have tried to brighten it up a bit with some flower pics I took in the summer).

Speaking with a group of carers today I was reminded how rubbish a lot of us are when it comes to looking after ourselves, so here's your helpful annual reminder* that this is something you are entitled to (every year) as a carer, regardless of whether you're in a recognised vulnerable group or not - it's free (yay!), reasonably quick and easy, and might stop you from getting sick this winter which, as well as potentially having an impact on the person you care for, is not great fun for you.
[ *nag]


Tweet
read on...
at Wednesday, October 10, 2018 No comments:
Email ThisBlogThis!Share to TwitterShare to FacebookShare to Pinterest
Links to this post
Labels: carers, Flu jabs, flu vaccinations 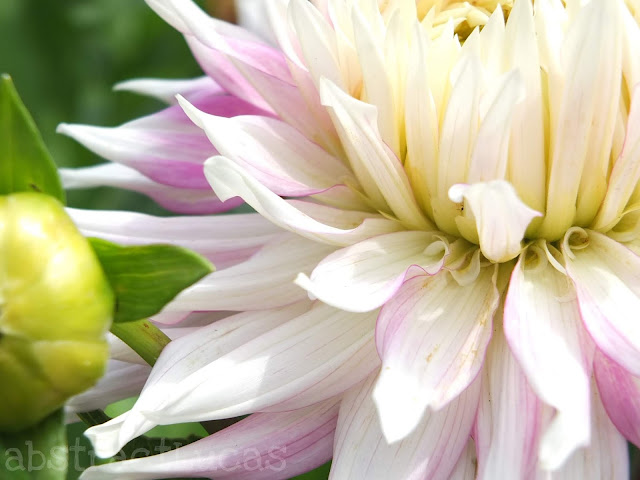 at Sunday, August 12, 2018 No comments:
Email ThisBlogThis!Share to TwitterShare to FacebookShare to Pinterest
Links to this post
Labels: #SilentSunday, silent sunday

I had a sudden realisation a few weeks ago that Smiler was in year 11 and not doing his GCSEs, even though pretty much every other year 11 in the country was enjoying an extra long summer holiday after finishing their exams.  It's obvious about Smiler, I know, but sometimes things like that can spring to mind, often triggered by an offhand comment on the radio, or a conversation with a parent who has a 'normal' year 11 child.  I do, clearly, know how old he is and what he does and doesn't do, and how different he is to most others of his age, but even with his brother and sister right behind him in school (just finished years 9 and 10), I kind of keep him in a protective bubble in my head, separate from the rest of my 'mainstream' parenting expectations and aspirations, grumbles and worries.


Then earlier this week, when we were picking him up from his last day of secondary school, he came through the double doors pushing his chair wearing a different t-shirt than the one he wore in to school that morning.  His teachers had made leavers t-shirts for the young people moving on to post 16 (which is what his school calls their equivalent to 6th form).  With his name on the front and messages from teachers about how lovely it's been teaching him, how special he is and how kind, and how much he's going to enjoy what's coming next, I was smiling until he turned around and I saw the back, at which point I felt my eyes prickling and my throat closing up. 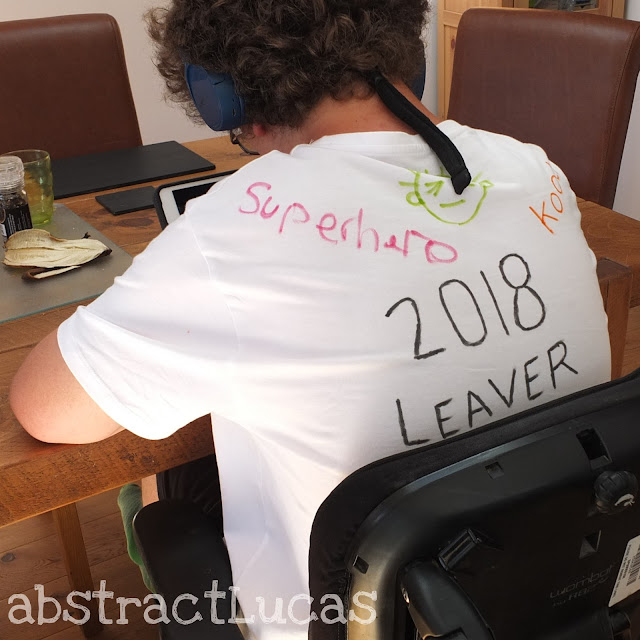 Not because he's (technically) leaving school, not because 'he's not my little boy anymore', but because I was hit all over again with the realisation of how different he is.  I've seen so many leavers hoodies the last month or two around and about - in school colours with huge number 18s on the back, sometimes made up of all the names of the leavers written in tiny font.  So many slightly greyed white shirts with multicoloured insults scribbled on by friends, a few dodgy looking doodles and the occasional rather creative swear word.


But there are five young people leaving his school.  That's it.  Five.  This is his equivalent of that leavers hoody, or shirt covered with reminders of friends and in jokes and teenage secrets.  He doesn't understand how different he is, but I do, and every so often when I get reminded it feels like I've been punched in the stomach and I'm incapable of breathing any air back in.


Reminded that that gap between the milestones he reaches and what others were doing is still growing exponentially.  He won't 'catch up' - that's not a real thing for these kids.  The gap just grows and grows and grows.

The selfish thing about it is that Smiler doesn't realise how different he is.  He doesn't sit in his wheelchair and watch other teenagers riding bikes and chatting with friends on their phones and wish that he could do that too.  I see it as a positive thing (although I've had other parents of special needs kids tell me it's an awful thing to say), but Smiler is so far from the normal range that it doesn't even occur to him, and I'm glad that he doesn't realise how different he is.  I know other young disabled people whose lives are filled with anger and frustration because they know what they want their body to do, and it just won't, or they are the odd one out at school because of their hearing aids, or they struggle to keep up with their friends in maths, but it's different with learning disabilities this severe.

In case you're reading this but don't know what Smiler is like, here goes: he'll be seventeen in September, has diagnoses of epilepsy, haemophillia, scoliosis, multiple joint and skeletal abnormalities, a heart condition, absent puberty, and severe learning disabilities (SLD).  SLD doesn't mean he's a bit slow, or that he takes longer to understand things - by way of illustration, Smiler can't read or write, though (sometimes) he recognises his name written down; he will correctly name red / green / blue / yellow about half the time; he can count (unreliably) up to four, but if you ask him how old he is he'll tell you he's eight.  Or maybe eleven.  He doesn't dress himself, brush his own teeth, cut up his food or do up his seatbelt in the car.  His favourite tv programmes are the Lion Guard and All Hail King Julian, his favourite radio station is Heart because they play a narrow enough range of music that it's fairly familiar to him.

I love him, I do, but sometimes it can be hugely frustrating when he asks the same question over and over, or spills his tea because the dog barked and made him jump, or it's rolls for tea and one of us has to make his while everyone else sorts their own.  And I know it isn't on purpose, and I know it isn't his fault, but knowing that doesn't help.  Having a 5'8 toddler is hugely stressful, and that stress is magnified when you know he'll get taller but not 'grow up' in the way that others do.

A lot of the thing he won't do don't even register with him which, as I said, I look at as a positive thing for him, but I still see them, all these things that won't be a part of his life - driving a car, enjoying an adult relationship, getting a job, starting a family.  And I selfishly mourn them for him.  And it's flashes like this, like his leavers top, that bring them to mind the infinite list of experiences he'll never have and, even though he doesn't know, I do.

So, I'm grieving.  Again.  For him, or for me, or maybe for us both?  For all the things he hasn't done, and all the things he'll never do, and all the things I'll never get to see him do.  And in a few days it will fade, this hurt, and then I'll be surprised by it all over again when some other silly thing makes my throat close up again, and my eyes prickle.  But right now, that leavers t-shirt makes me want to cry. 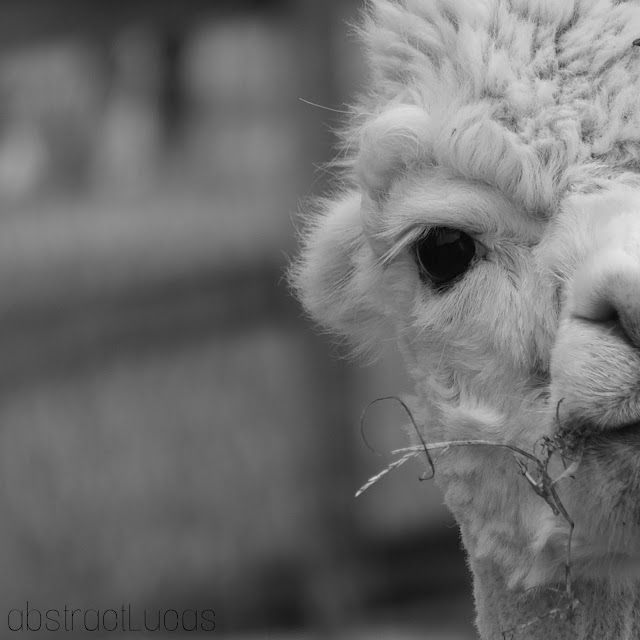 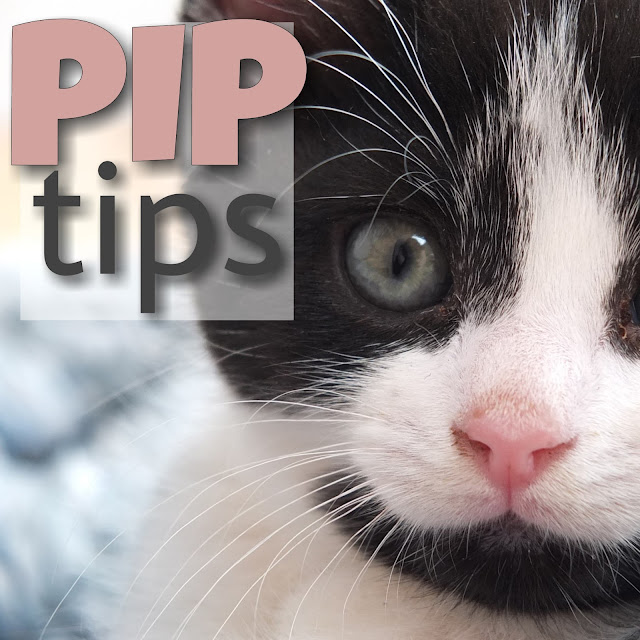 This post kinda slots into a short run about when Smiler switched from Disability Living Allowance (DLA) to Personal Independence Payment (PIP) when he turned 16 - you can find the other posts here (part one) and here (part two)  I thought it might be useful to share these tips and pointers for others who are filling in PIP forms for their child (or even themselves, so please excuse my references to 'your child').  It seems the Department for Work and Pensions (DWP) are retaining DLA for under 16's (for the time being at least), so this switch from one to the other at age 16 is here to stay.  There's a few photos of Tilly the kitten thrown in too, just to relieve the tension!

Working out where to start when you're filling in any of these forms is a bit of a nightmare, but often the first page or two are basic info about the person the form is about - date of birth, address, GP contact info - this seems to depend on whether the PIP claim is brand new, or if there was already a DLA award - if there is a current DLA award this info might be printed on there already, in which case you need to move on to listing health professionals, so skip down the page until you see the ◇.  Double check on the front page of the form whether  you must use black ink or all capital letters or mirror writing - I think they've relaxed a bit in the last 15 years or so but it's best to double check!  Take a pen (not a pencil, even if it doesn't specify what colour ink you need to use, they still want pen I'm afraid) and a deep breath and make a start.  Fill in the things that you absolutely know to be accurate - middle names and dates of birth and postcodes are important here.  If you aren't sure, leave it blank for now, and try and find out in a minute - especially things like contact phone numbers - you really don't want to guess!


◇  So, question 1 asks you to list health professionals that your child sees.  As you're asked for addresses, write out the whole address, including the postcode.  If you don't know the whole address, for example of the GP surgery, Google is your friend here - type in the name of the practice and the town, and you should be able to find their website, and if you go to it there will be the full address (and phone number, you'll need that too) either on the main home page or a contact page.  Might also be handy if you're not completely certain how to spell the name of the GP, as there's probably a list of them on the site.  Go back through your calendar or any letters you have to see when they last saw your child, and if you really can't work it out you could ring the surgery / hospital / office where they are based and ask if they could look it up for you - always be friendly and polite though, as you are asking for their help, and the people that answer those phones have a million and one other things to do!


Tweet
read on...
at Saturday, July 14, 2018 No comments:
Email ThisBlogThis!Share to TwitterShare to FacebookShare to Pinterest
Links to this post
Labels: disability related admin, moving from DLA to PIP when you're 16, parent carers, PIP
Older Posts Home
Subscribe to: Posts (Atom)