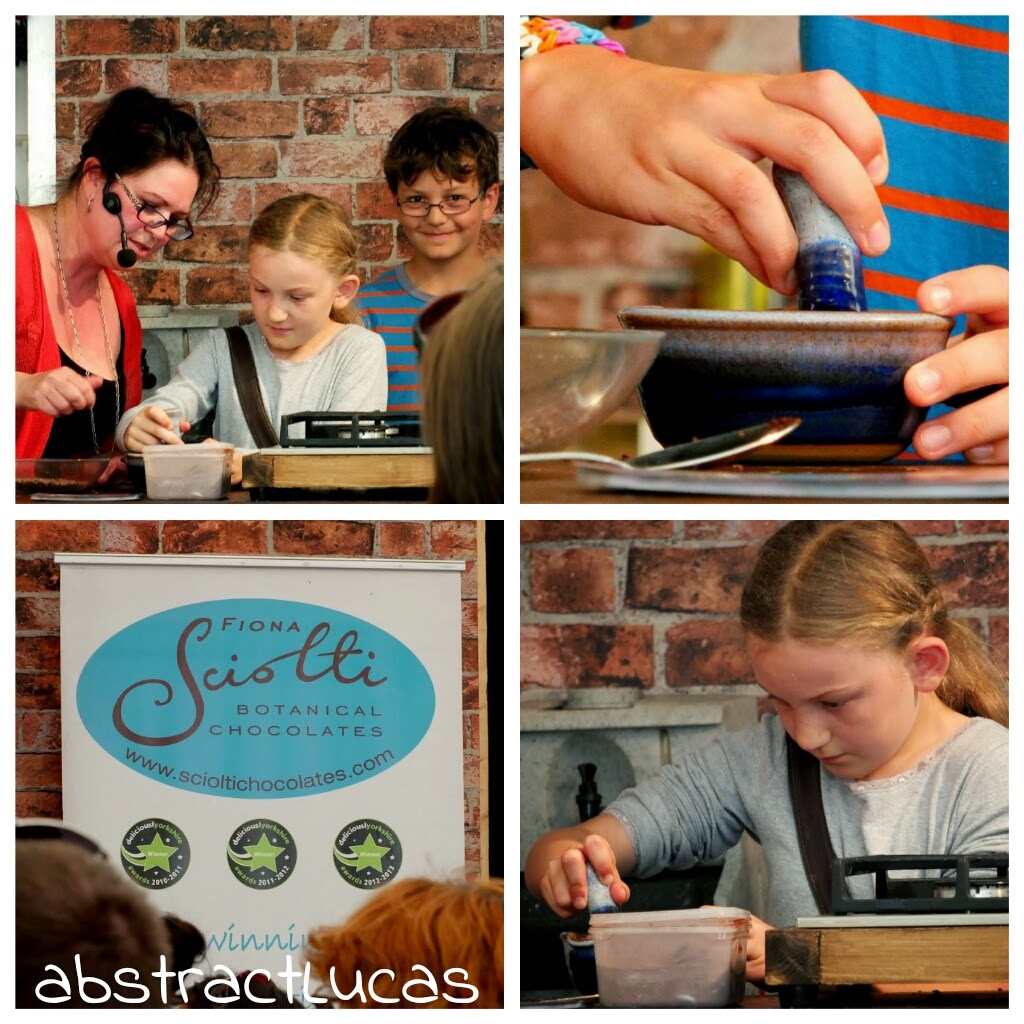 At the Bristol Foodies Festival we were lucky enough to not just get tickets to see Fiona Sciolti talk about her gorgeous chocolates, but for Noah and Petal to join her at the front!

While Fiona told us about the history of chocolate, how it's prepared and how those processes have changed over time, Noah and Petal got busy taking turns grinding coco nibs with the pestle and mortar.  The theory is that while they seem dry, if ground up the oils are released, making a paste - the seriously old fashioned way to do it! 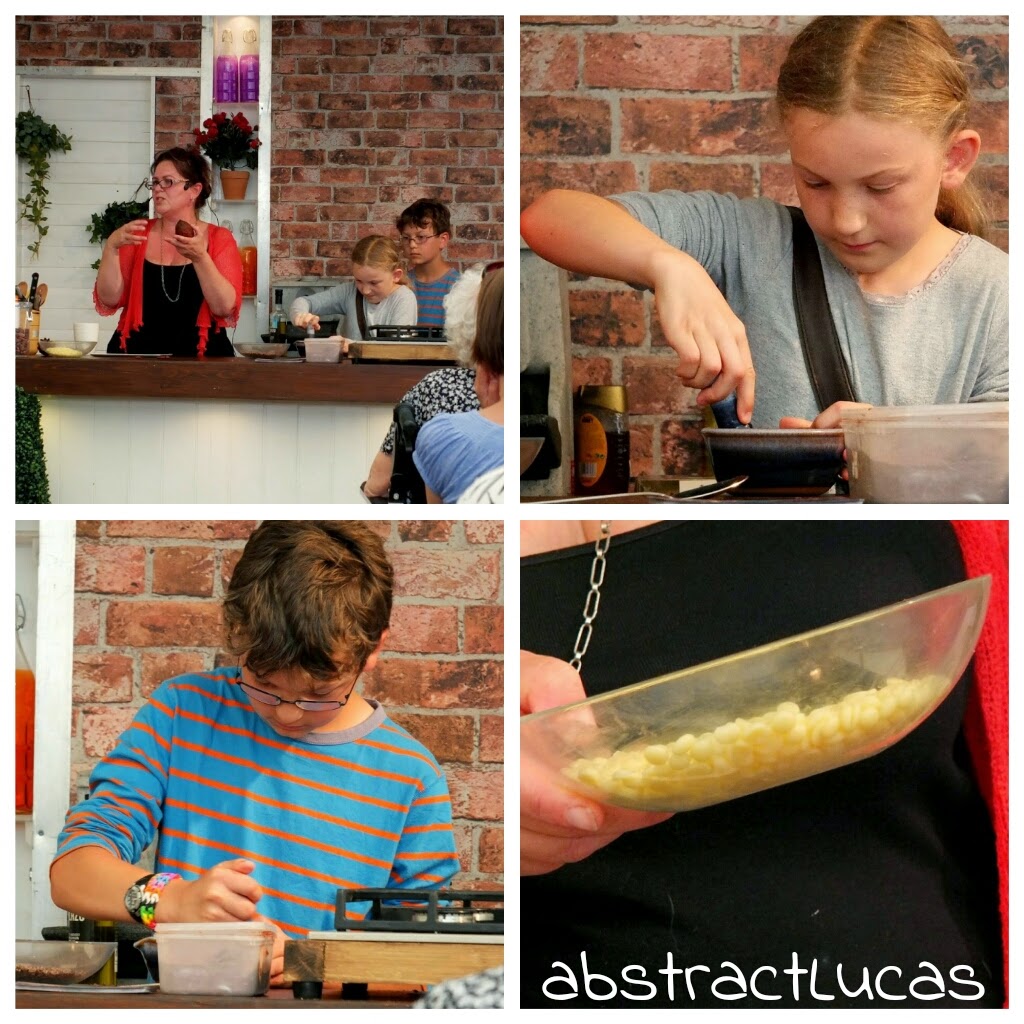 Smiler watched with interest, but you could see he was pondering the announcement at the beginning of the demonstration - Fiona and Giles had mentioned they've recently branched out into ice cream..

As Petal and Noah continued to grind away we learned more about how the process involved have changed over the years, impacted by the development of various machines which changed the texture and experiments in ingredients which altered not just the flavour but also the form - chocolate in bars for example.

Seeing, touching and smelling an actual real live cocoa bean and cocoa butter together with various bits and pieces that were passed around added a sensory element to the presentation, which was fab for Smiler, and helped him (finally!) move on from the ice cream.

... And Fiona explained that since white chocolate contains cocoa butter this means it is officially chocolate, confirming my lifelong position on the matter! 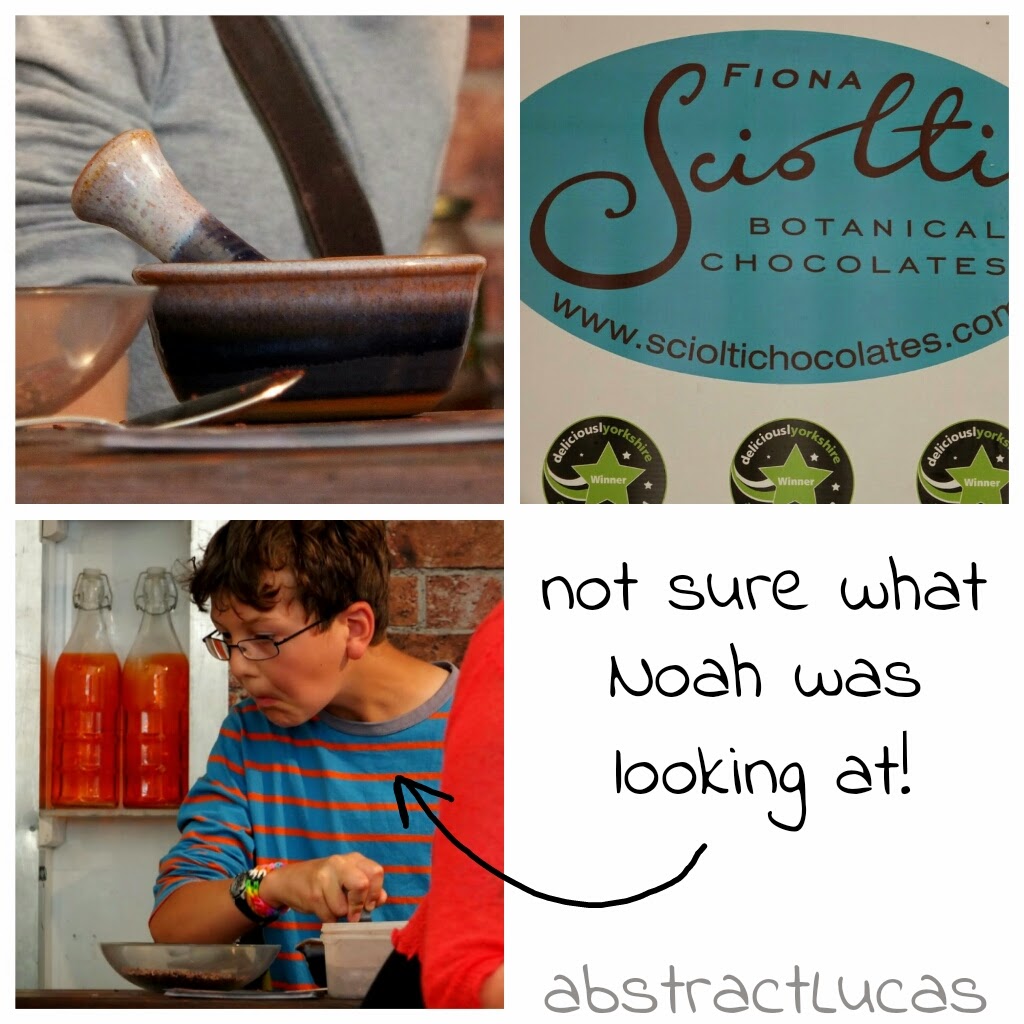 The flavours of Sciolti chocolate are developed by Fiona, and kept to a relatively small range in order to ensure the highest quality is maintained.  Committed to using natural flavours and genuinely local ingredients (including flowers, fruits, cream and honey), Sciolti has attracted a fair bit of attention, including several awards - not surprising in the least if you take a peek at the website.  While you're there I recommend you read Fiona's news page which gives an idea as to why her demonstrations are so popular - her approachable manner and obvious love of what she does is clear, as is her irreverent sense of humour!

With the grinding all finished, the kids tried the chocolate they'd made, having been warned that with its intense taste and lack of milk and sugar it would be nothing like the chocolate they were used to.  Noah and Petal both professed to enjoy it, but then I have yet to find any chocolate that they won't eat.

When we passed the stand a little later Smiler spotted the sign and recognised it from the demo.  After trying a couple of flavours of chocolate (I highly recommend the strawberry cream if you get the chance to visit a similar event, or you can buy online ... I just spotted Raspberry pavlova ... ooo ... and they do chocolate spoons too ... even more ooo!) we decided the ice cream looked too good to resist!  No photos of anybody tucking into their chosen flavour as I was busy with my own, but as well as being the cheapest available at the event I genuinely struggle to believe there could have been any others that tasted as divine.