I am the soft starshine at night

It happened.  This weekend.

She had been in my life since I was born.

She was ninety, still living in the house she shared with her husband, my Uncle Cyril, until he died last year.

She had no children - living at a time when women had to make defined choices about careers and families, she chose to be a school teacher, then a headmistress at an elite girls boarding school, not marrying until she was thirty, almost unheard of back then.

Post mortem today, to determine whether she fell down the stairs then had a stroke or the other way around.  As she didn't press her alarm, it's likely she was unconscious and "didn't know anything about it".

She loved this, I know it brought her comfort after Cyril died.

How To Bake :: stilton & grape flatbread 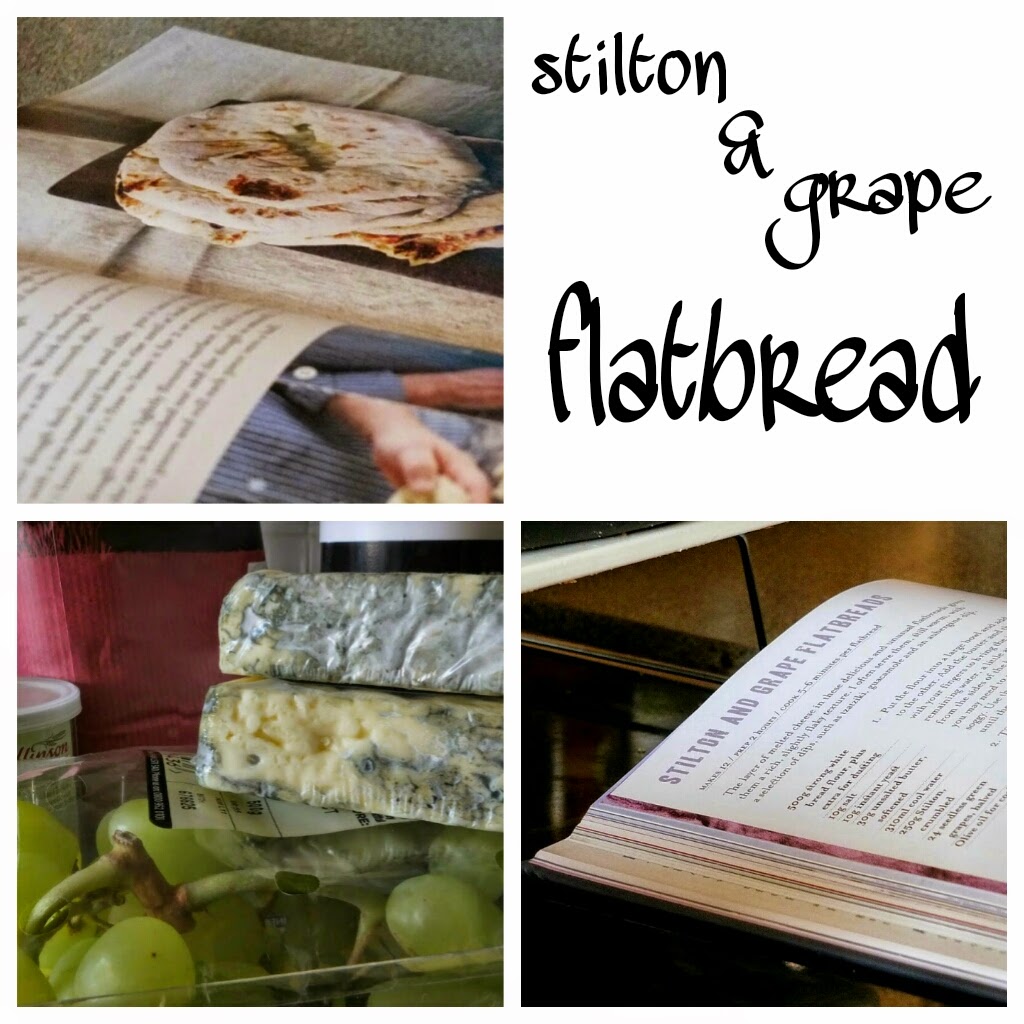 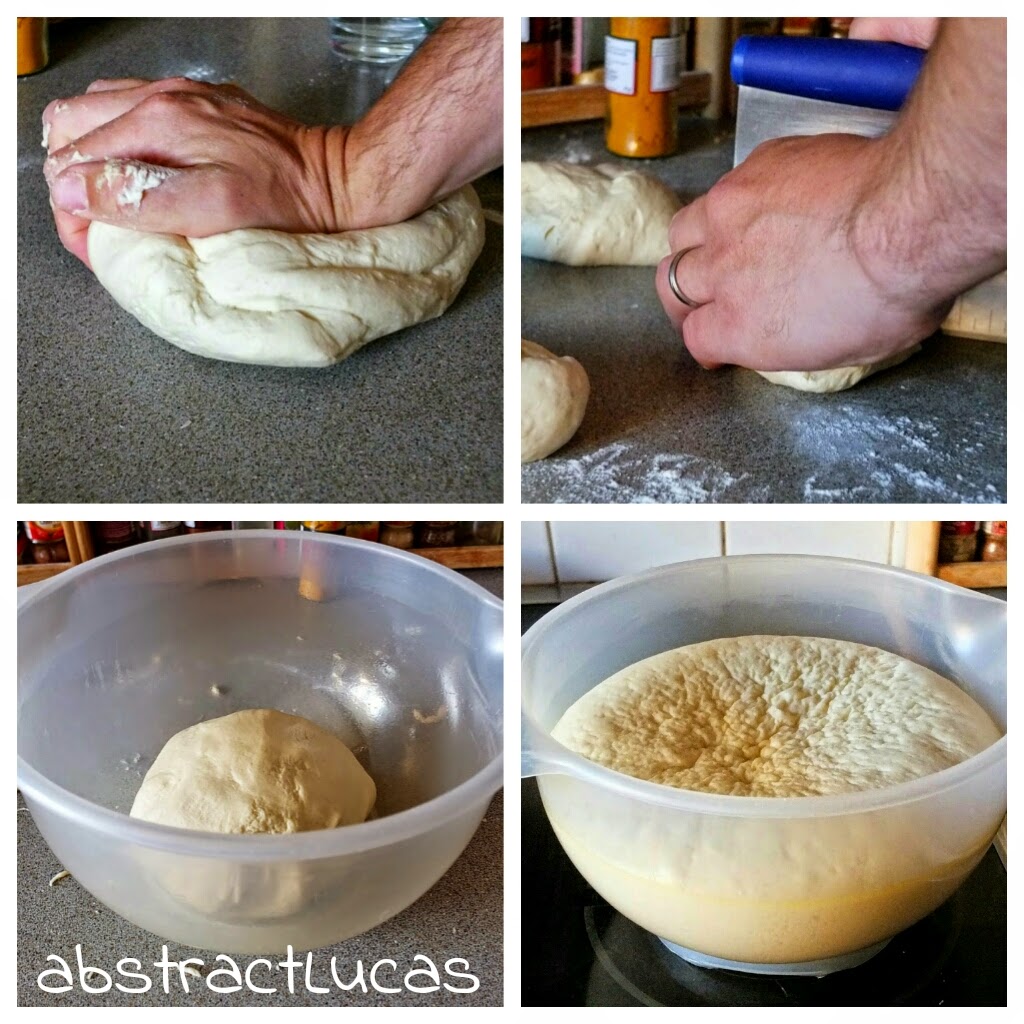 I'm always a bit wary of the 'leave until the dough doubles in size' bit, mainly because I've never before had dough that actually did double in size, but whaddya know - it did this time!

Although the pics are in the wrong order (I'm trusting you to be able to overlook that) please note the fancy/not fancy dough cutter/scraper with the blue handle - an inspired birthday gift from Petal for Mr Manley this past Spring, from Lakeland - only £4.99.  According to the afore mentioned Mr Manley it makes it possible to work with impossibly wet dough, so a bargain then! 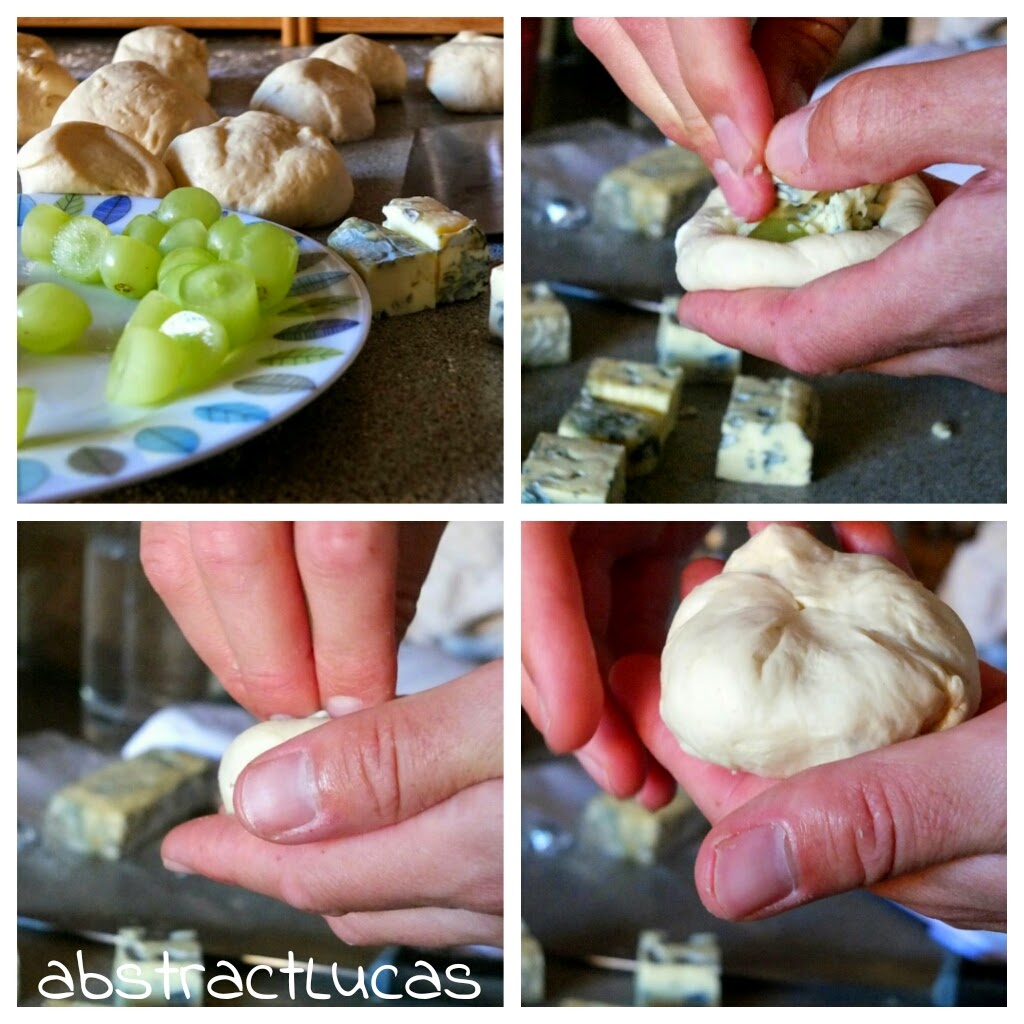 Each piece of dough is crammed full of what seems like a huge amount of cheese and - as per the slightly alarmingly specific instructions - four halves of grapes.  Although this initially appeared to be ridiculously faffy, once we were flattening out the pudgy little parcels it became obvious why they needed to be less than full size single grapes - they catch as you roll, and tear the dough. 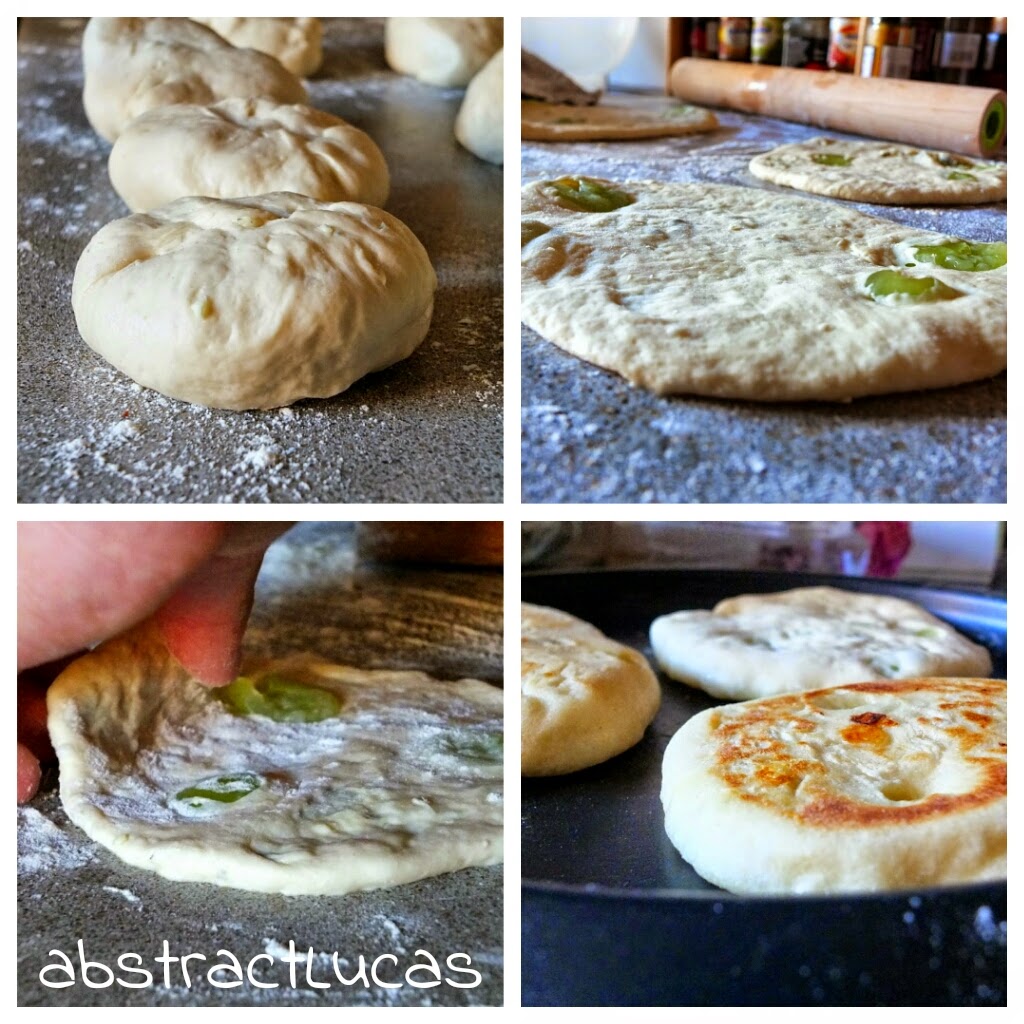 Then into a frying pan where they puff up and brown off - they came out looking fab actually, and my worries about melted Stilton all over the place fortunately didn't come to anything! 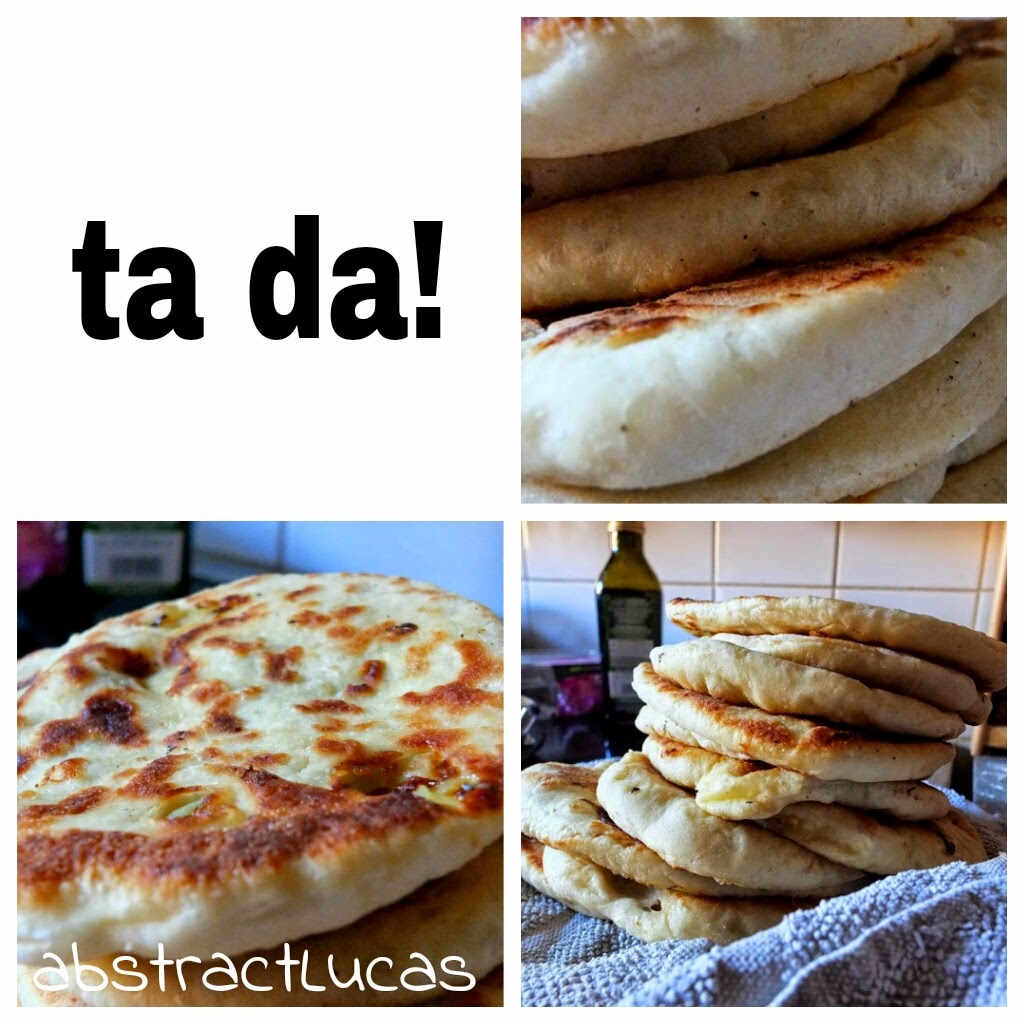 The flatbreads were very filling - probably something to do with all that cheese - so we had leftovers.  Although the instructions said to serve warm, we defied Mr Hollywood by tucking into them the next day cold, and they were lovely, thank you very much.

Likely to become a regular addition to our picnics, these got two thumbs up from the kids - a promising start to our exploration of How To Bake!

{ I was sent a copy of How To Bake to review by Suppose, but all thoughts and opinions are my very own.  Or Mr Manley's.  Or the kids.  Promise }
Tweet
at Wednesday, October 08, 2014 3 comments:
Email ThisBlogThis!Share to TwitterShare to FacebookShare to Pinterest
Links to this post
Labels: baking, bread, cookbook, flatbread, food, How To Bake, Paul Hollywood, review, stilton and grape flatbread

a radio for Smiler

Choosing a gift for someone with a learning disability can be complicated.  Smiler has never been any different in this regard - his developmental stage has never been the same as his chronological age, so birthday present shopping has always been - well, to be completely honest, it's always felt like a bit of a kick in the teeth.  The ever present 'not suitable for a child under 36 months' was a bugger for (literally) years, because of course the reason it's not suitable is because it had small parts they might try and swallow.  So what about when you're shopping for a ten year old who will still happily stick everything in their mouth, just in case it might taste good?  Clothes and books have been a steady fall back - Smiler doesn't play with toys as such, so they've always been a waste of money, but he loves us to read him stories - Charlie and Lola; Rastamouse; Boo; Winnie the Witch; anything and everything by Julia Donaldson.  But this birthday we had a brainwave - a radio!

A strangely age appropriate gift for Smiler's thirteenth birthday, on the surface at least, but oh my word, you wouldn't think it would be so hard to find a radio that did what you need it to.  We didn't think we were being that picky, but it turned out finding a radio for Smiler's birthday was so so much easier said than done...

Smiler adores Heart - a somehow abnormally normal passion bearing in mind his challenges, but he sings along with odd words of songs, and joins in with a couple of slogans from the regular adverts.  He recognises the names of the presenters and has a particular fondness for Ed, Troy and Paulina from the breakfast show, and when Spidey-man phones in to talk to them - well, he loves it.  So the radio needn't be DAB or anything fancy, no mp3s, no GPS, no downloadable doodahs, no flashing lights, no curtain attachments - just the ability to access Heart!

It needs to be tough enough to take being handled in what we knew was likely to be a not-quite-as-carefully-as-we-would-have-wished kinda way.  Not indestructible (is there such a thing as an indestructible radio?) but not going to die the first (or twenty-first) time it was dropped or handled a bit roughly.

Tweet
read on...
at Tuesday, October 07, 2014 4 comments:
Email ThisBlogThis!Share to TwitterShare to FacebookShare to Pinterest
Links to this post
Labels: children with special needs, gifts, Heart Breakfast, how to share a book with a child with special needs, LD, music, radio, Smiler, Smiler's story

Paul Hollywood :: how to bake

A sponsored post today, courtesy of Suppose who very kindly sent me a review copy of How To Bake by Paul Hollywood, he of #gbbo fame.  Now cakes I've had plenty of practice with, baking as well as consuming, but bread is another matter entirely, so while I'm in charge of photos, it will be Mr Manley's hands doing the work this time around, but first, the book as is.


Initial impressions are that Paul Hollywood should really consider buying a few new shirts that aren't identical to those he already owns - sorry Paul, I know it's something of a trademark, but really, variety is the spice of life and all that.  I have to admit I tend to be Team Berry on Wednesday evenings as she seems to concentrate on the positive as opposed to the aspects that need to be improved, but the tone of the book is far more encouraging and supportive and positive than many of Paul's ... erm ... constructive comments on Bake Off.  A wide range of recipes covering pies, pastries and even cakes demonstrates he doesn't consider himself an expert only on bread, but as I've plenty of other cookbooks I'd likely peek at first for those, it's really the bread chapters that appeal to me - flavoured breads, sourdoughs, mmm...  Well, I say appeal to me, what I mean is that they appeal to me to eat, and to ask Mr Manley to bake in order that I can eat them.  Same thing, yeah?  Anyway, plenty of photos, pretty straightforward instructions, some slightly fiddly ingredients but nothing you couldn't find in a well stocked supermarket - hopefully no special trips necessary to obtain specialist ingredients!  So far, it looks promising - a well presented book of recipes that seem realistically manageable (says I!), and for £9 I think it would make a great birthday gift for a Bake Off fan or a purchase you can certainly justify for yourself - after all, who wouldn't like the sound of Stilton and Grape Flatbreads, or Apple Brioche, or Chocolate and Apricot Sourdough?