a radio for Smiler

Choosing a gift for someone with a learning disability can be complicated.  Smiler has never been any different in this regard - his developmental stage has never been the same as his chronological age, so birthday present shopping has always been - well, to be completely honest, it's always felt like a bit of a kick in the teeth.  The ever present 'not suitable for a child under 36 months' was a bugger for (literally) years, because of course the reason it's not suitable is because it had small parts they might try and swallow.  So what about when you're shopping for a ten year old who will still happily stick everything in their mouth, just in case it might taste good?  Clothes and books have been a steady fall back - Smiler doesn't play with toys as such, so they've always been a waste of money, but he loves us to read him stories - Charlie and Lola; Rastamouse; Boo; Winnie the Witch; anything and everything by Julia Donaldson.  But this birthday we had a brainwave - a radio!

A strangely age appropriate gift for Smiler's thirteenth birthday, on the surface at least, but oh my word, you wouldn't think it would be so hard to find a radio that did what you need it to.  We didn't think we were being that picky, but it turned out finding a radio for Smiler's birthday was so so much easier said than done...

Smiler adores Heart - a somehow abnormally normal passion bearing in mind his challenges, but he sings along with odd words of songs, and joins in with a couple of slogans from the regular adverts.  He recognises the names of the presenters and has a particular fondness for Ed, Troy and Paulina from the breakfast show, and when Spidey-man phones in to talk to them - well, he loves it.  So the radio needn't be DAB or anything fancy, no mp3s, no GPS, no downloadable doodahs, no flashing lights, no curtain attachments - just the ability to access Heart!

It needs to be tough enough to take being handled in what we knew was likely to be a not-quite-as-carefully-as-we-would-have-wished kinda way.  Not indestructible (is there such a thing as an indestructible radio?) but not going to die the first (or twenty-first) time it was dropped or handled a bit roughly.

Portable but not personal

Batteries or rechargeable - not (only) mains power, as Smiler likes to have music wherever he is (rings on his fingers and bells on his toes!), so it had to be carry-around-able.  Course that also means it can't be too big or heavy.  And headphones or earphones are out of the question for Smiler, as they just wouldn't stay on his tiny and weirdly shaped head - trying to get his glasses to stay on his face remind us of that every day - apparently they're designed for people with two ears which are broadly the same size as one another, as well as approximately the same level and the same distance from the face and angled in vaguely the same direction on one's head.  Picky picky picky.  The personal radio with speaker plugged into the headphone jack option is ruled out by the carry-ability issue, and a personal radio with a wireless speaker is a no go because he'd have to turn on both separately, and that's tricky.  Bugger.

Independently turn off and on-able

Oh yes, it's that old creature comforts/British gas thing - not fiddly little switches, or a series of buttons to get it on - simplicity is the key here!  Smiler needs to turn it on and then hear music - otherwise it's likely to be disregarded as broken or just thrown across the room out of frustration.

Last but certainly not least...

A do-able volume control which (and here's the really tricky bit)  does not also double as (or get confused with) a tuning dial.  We found several which ticked every other box, but had two identical dials on the front - not a problem usually perhaps, but Smiler would constantly untune the radio and then need help getting out of a world of static.  Apart from this being hugely irritating for the rest of us who would have to retune it all the time, this would also upset Smiler, who would then in all likelihood not want to use the radio at all.

After hours (literally) of trudging around shops asking to see how the radios worked and trolling online to find one that did actually do everything we had pretty much given up.  The poor assistant in Currys went home cursing us I'm sure, after we'd fiddled with most of the radios and not ended up buying anything.

'Maybe we'll find one in time for Christmas' Mr Manley said dejectedly.  'He'll definitely love the new jumpers though' I replied, 'and it's not like he knew we were trying to get him a radio...'

Into Tesco for some new facecloths for him instead, and we did that 'since we're in here we might a well look' thing, and found one that was perfect!  Bright red, batteries as well as mains, that slightly rubbery surface so easy peasey to hold on to, a single dial on the front for the volume, you turn it on by pressing a single button and the station is programmed in. 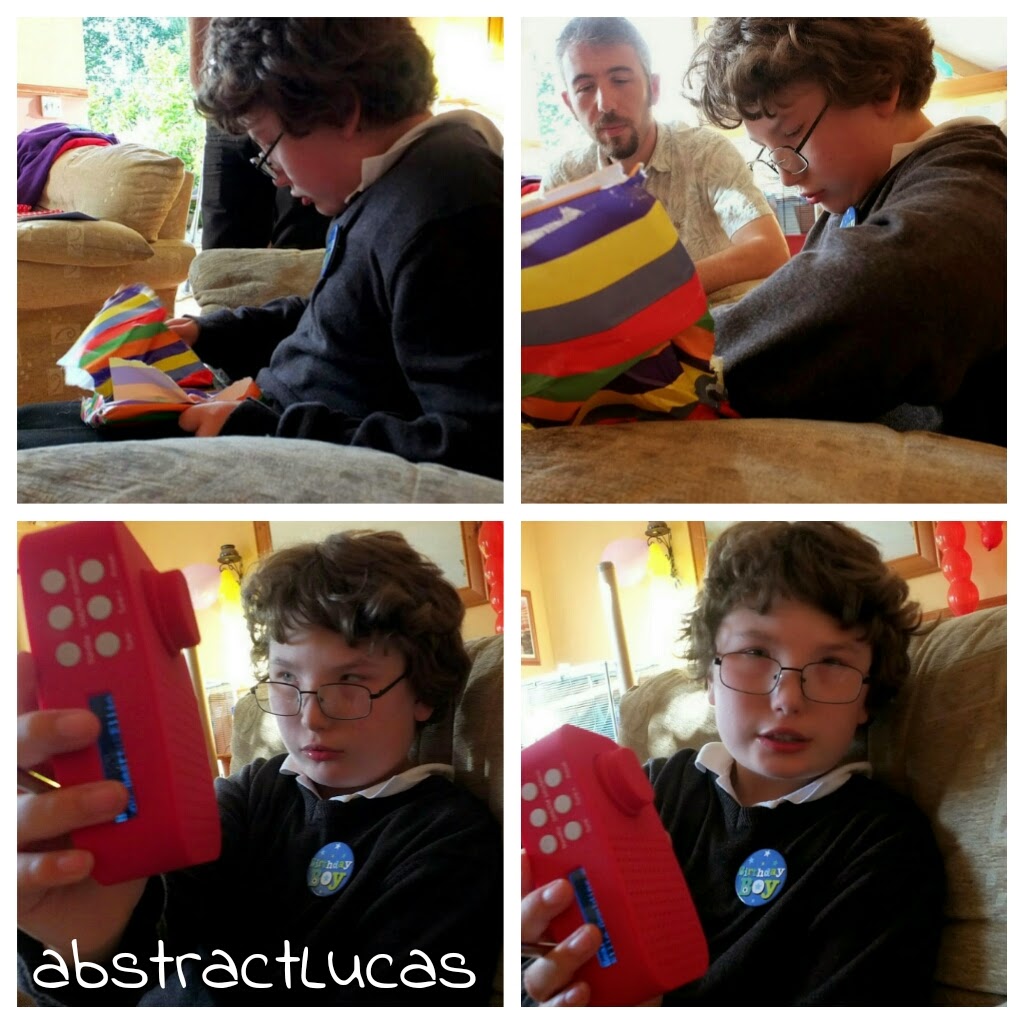 Get widget
at Tuesday, October 07, 2014
Email ThisBlogThis!Share to TwitterShare to FacebookShare to Pinterest
Labels: children with special needs, gifts, Heart Breakfast, how to share a book with a child with special needs, LD, music, radio, Smiler, Smiler's story