Shutter speed was the name of the game this morning, and our first stop was at the fountain on College Green - a perfect test subject.  Using shutter priority (S on my camera) it was a matter of juggling a fast enough shutter speed to 'freeze' the water with getting enough light into the camera to get the picture.  I struggled to get the focus right - to get enough light into the camera I had to switch to manual mode (where you set the shutter speed and aperture), and I got muddled and thought I had to use manual focus too, which I didn't.   Blame the brain cloud.  Anyway, while the top two pictures have droplets of water in sharp focus towards the back of the shot, the bottom two were focused at the front of the image but not as sharp.  Ah well. 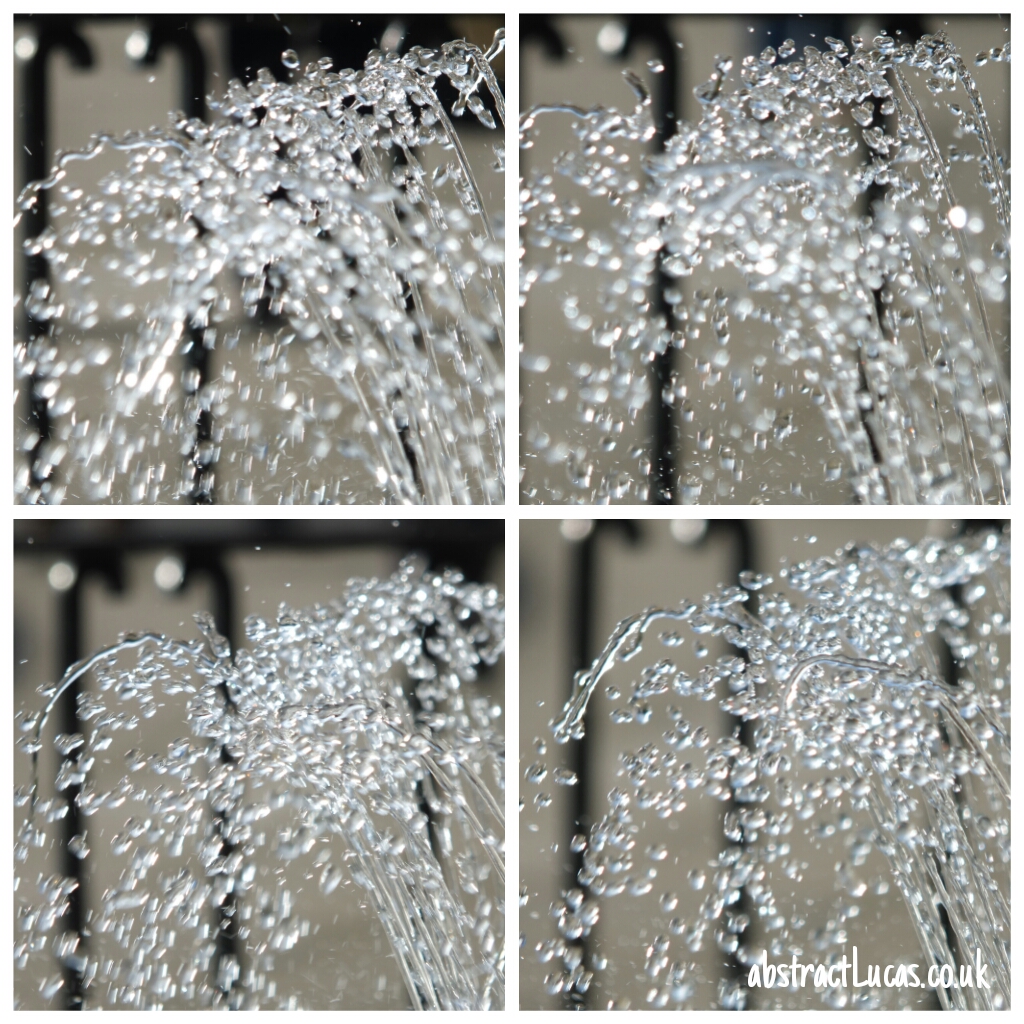 This was back in shutter priority mode, using a slow shutter speed to catch the motion of the water.  I had the opposite issue with light this time - because the shutter was open for a longer period there was to much light getting in,  leaving me with white out images - as you can see on the bottom left! 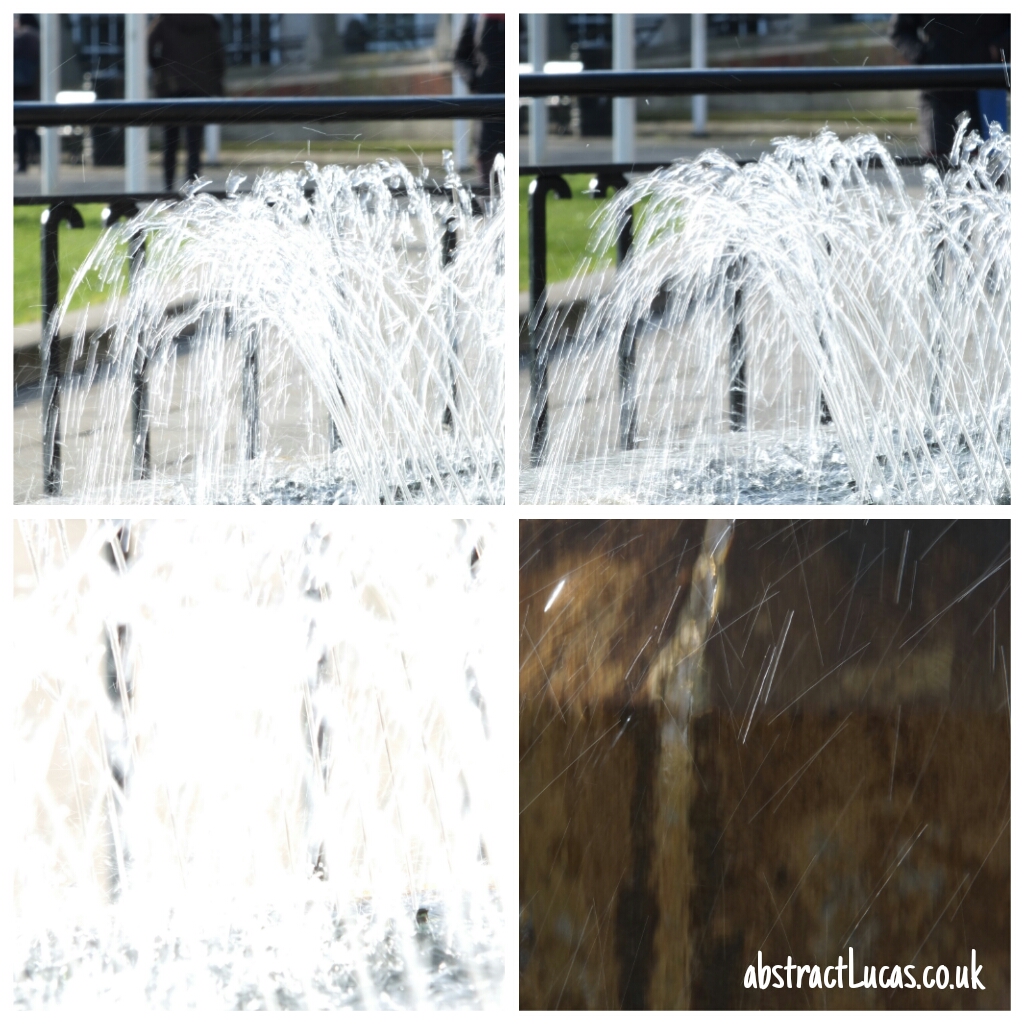 Again, switching to full manual mode gave me the control I needed to keep the aperture small enough not to white out the whole image (small size aperture = big number f stop - I used f11.  This is also why the background is in focus).  I like the top right picture - the lines created as the water moved look like fireworks.

We moved on to the centre gave panning a go.  Panning is when you syncronise moving the camera with an object in focus so the background is motion blurred, giving the impression of motion and energy.  You know how cyclists are always getting in the way when you're trying to get somewhere?  Well, it turns out they follow the same rules as police officers and buses - when you're looking for them, they are nowhere to be found.  Flippant comment re cyclists there, I'm all in favour of pedal power, but I wish they'd stay on the road.   Unless I'm trying to photograph them of course.  Then they're welcome on the pavement. 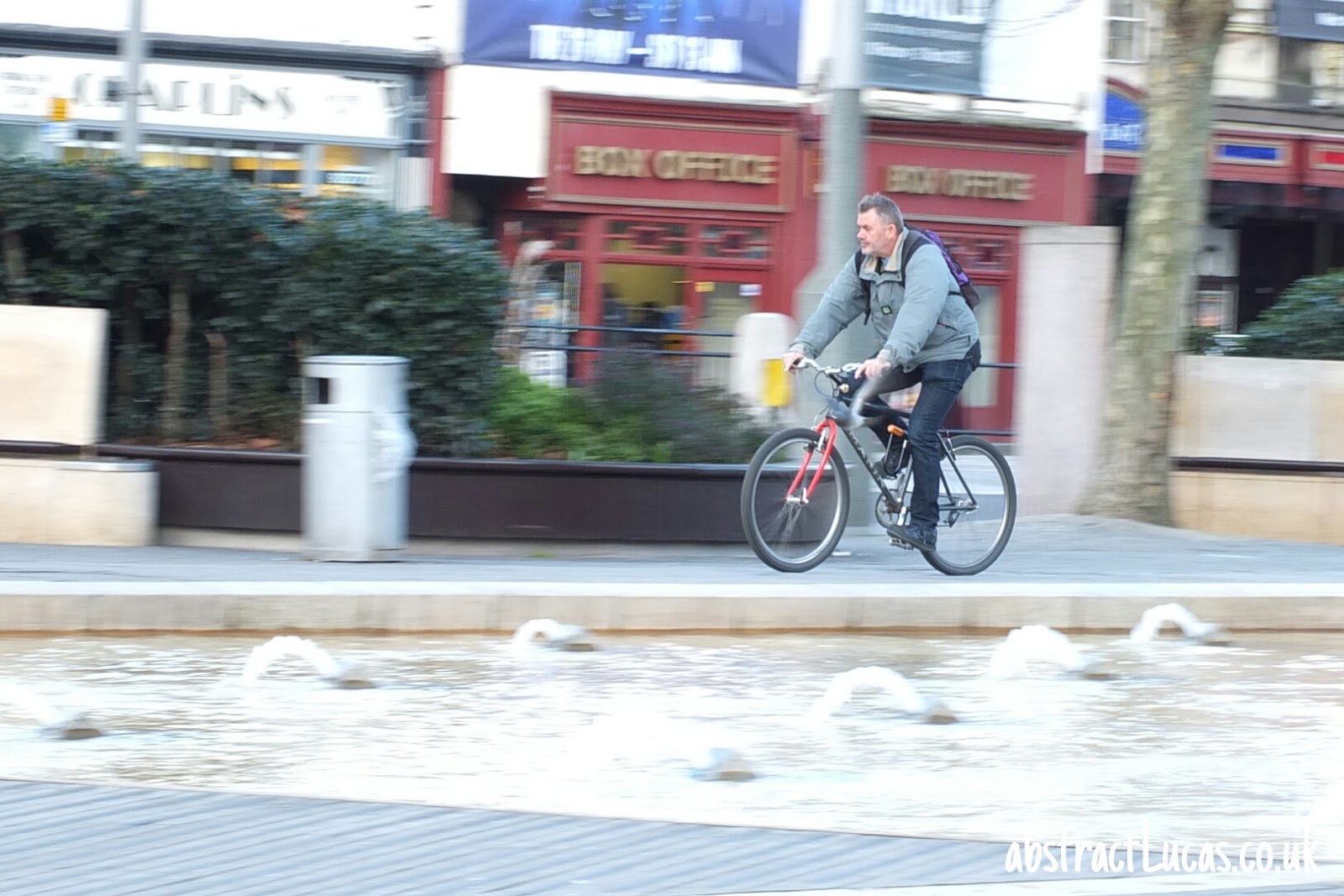 The cyclist and his bike are in focus, lateral motion blur is evident in the water in the foreground and the signs and foliage in the background.  This was taken using shutter priority with a speed of 1/30 (which means a thirtieth of a second) and an f stop of 8.  Thinking about it later, I was pondering whether the colours in the background are a distraction, so switched it into black and white - what do you think? 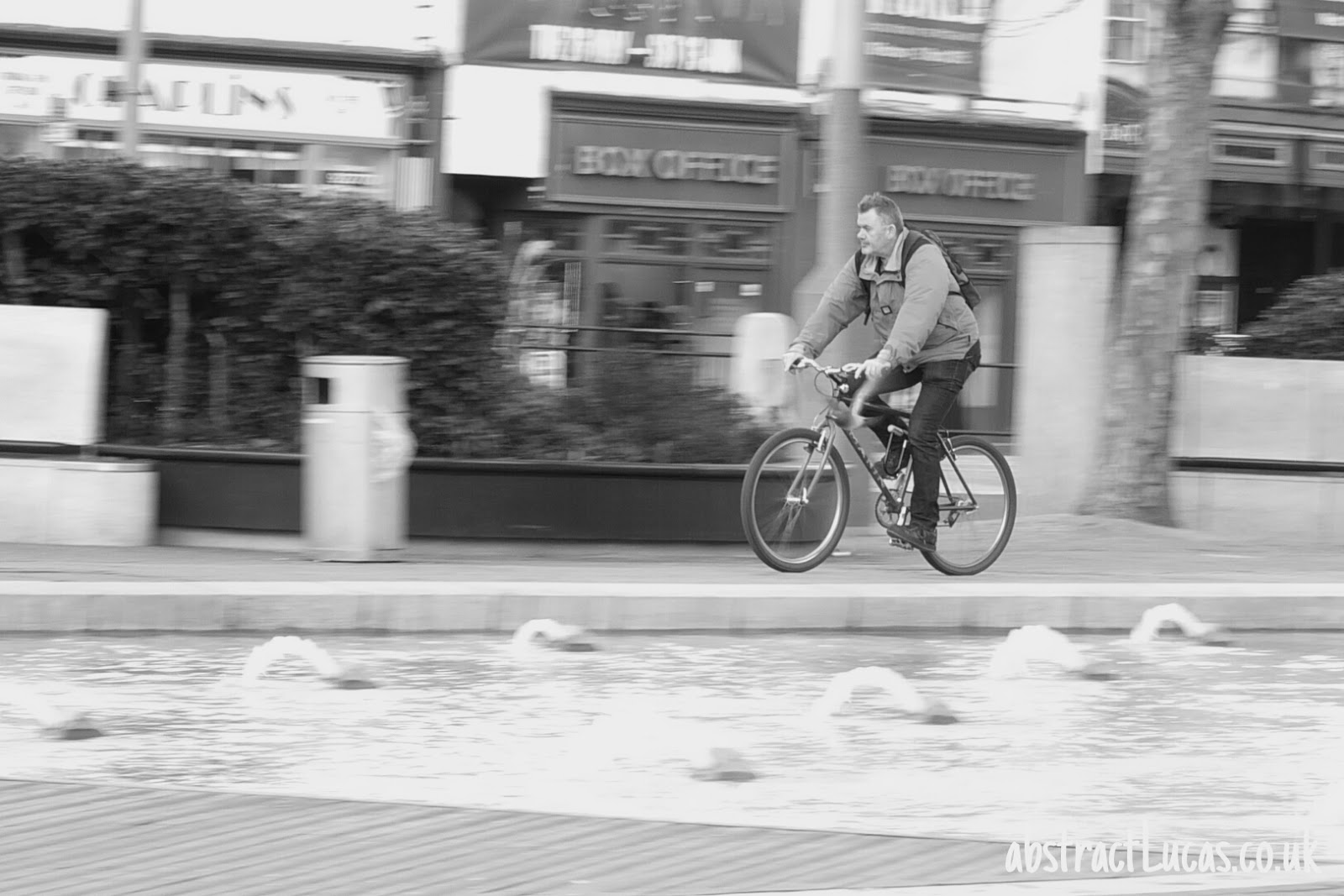 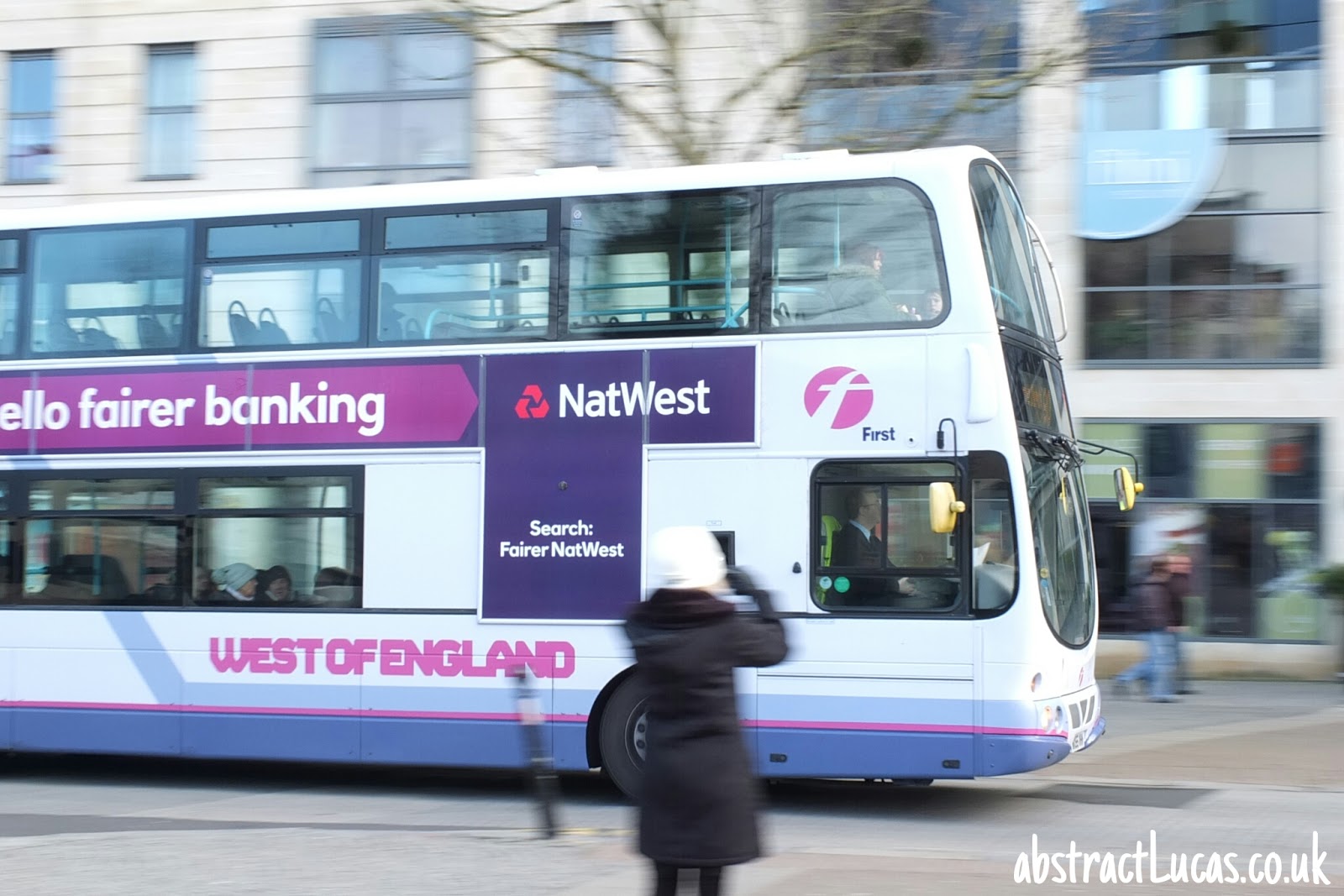 This one of a bus was on 1/40, so a little longer than the cyclist.  The figure in the foreground there is Kim, also snapping that bus! 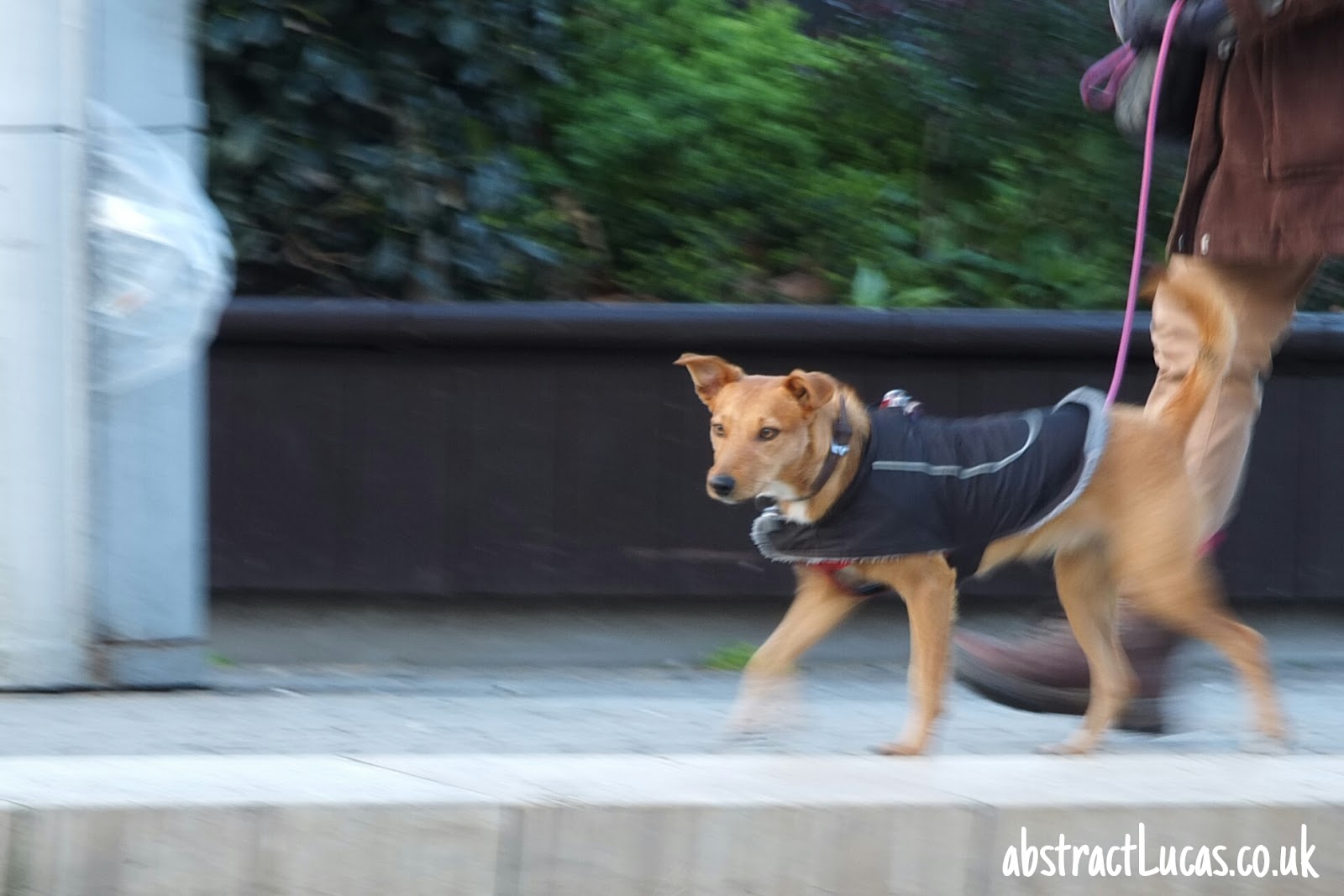 This is my favourite of all the shots I took today - there's the motion blur of the background and the blurring of the dog's legs and tail, the clarity of his face, the room in front of him, giving him space to walk into!

Remember the rule of thirds (the Golden Ratio, Fibonacci sequence, fractals) - consider positioning the subject of the photo along either horizontal or vertical thirds axis

Rule of thirds also applies to background elements - in a beach shot for example, don't split the picture into two halves with the line between the sea and the sand - instead compose the picture spitting a third and two thirds

Avoid bullseye shots - these are seldom interesting.   Take a couple of steps to the side and reframe

If the purpose of the photo is to highlight symmetry then frame carefully, and consider shooting from ground level or high up looking down - avoid eye level

Take advantage of leading lines - these draw the eye into the picture, to the subject.  These might be power lines, pushchair tracks or a surface texture

Diagonal lines can add interest - keep the role of thirds in mind too.