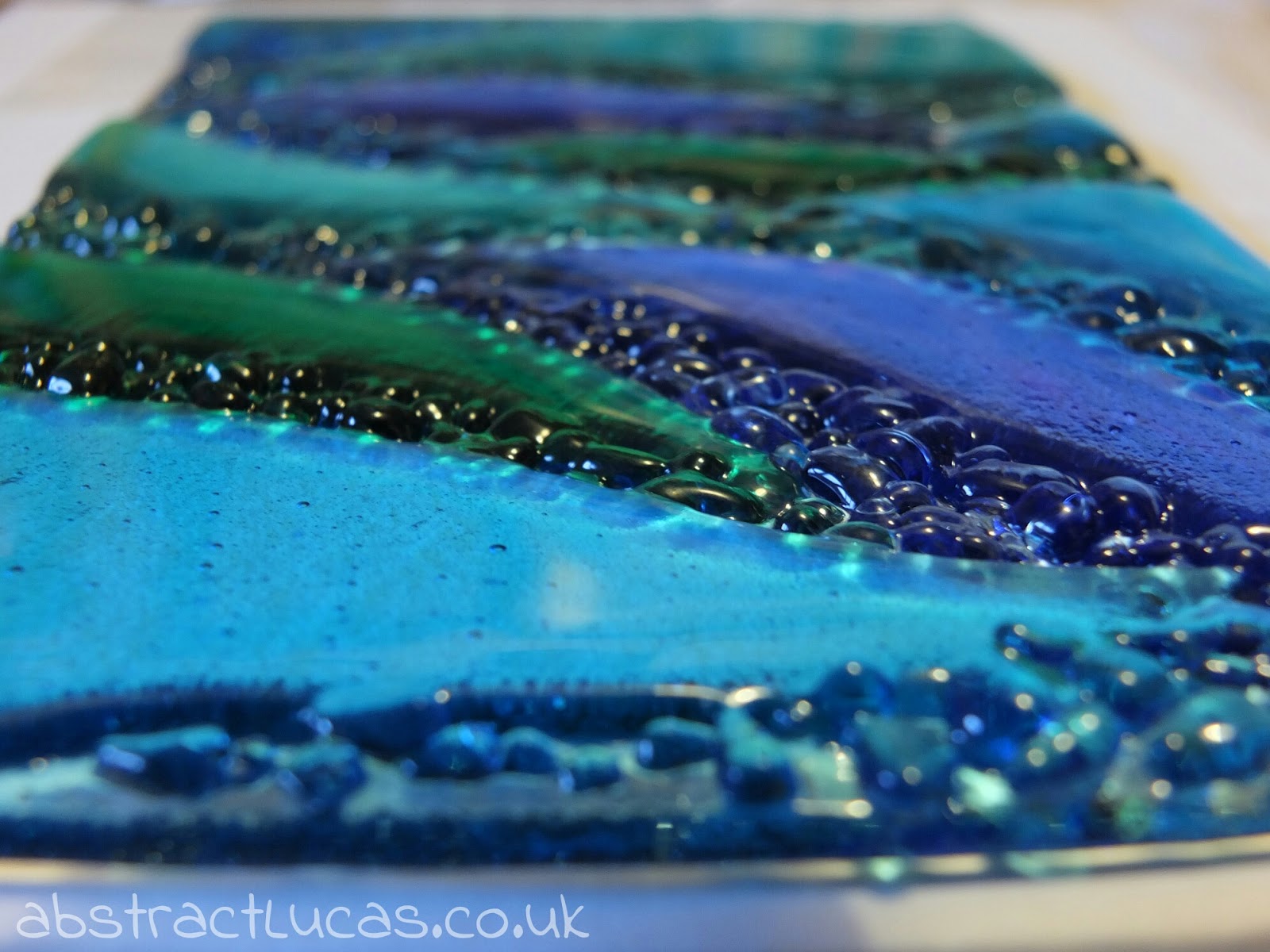 The next stage of the lightcatcher plan was to partially fill the spaces between the shapes with frit - pieces of glass.  Graded according to size, frit can be purchased in a range of colours in coarse, medium or fine.  Because I wanted a mixture of sizes but pieces big enough to create the impression of bubbles I chose mostly coarse frit, though with a few spoonfuls of medium and even a bit of fine. 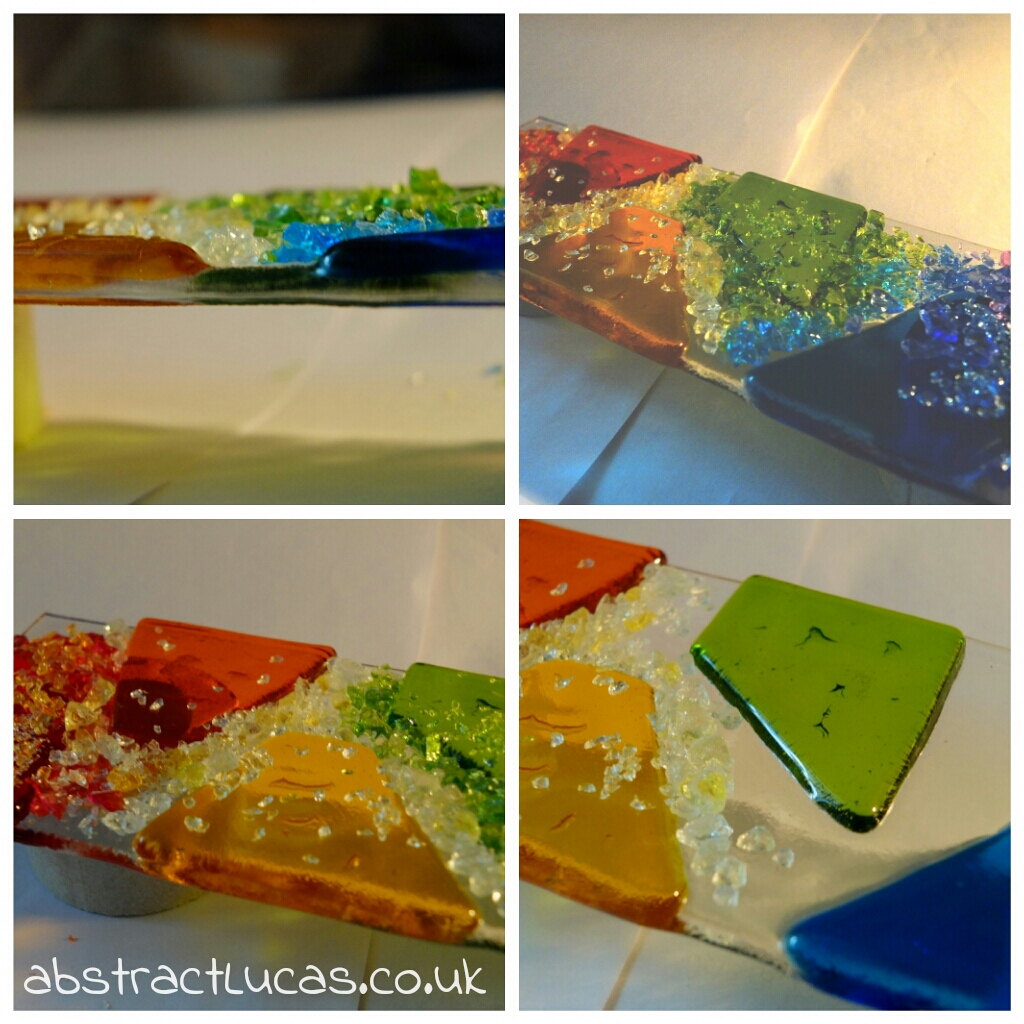 Please excuse the dodgy photos - again these were taken with my tablet when my camera was out of reach!  As you can see - I hope - I pretty much filled the gaps between the pieces with frit, as well as spreading a little over the top to add a bit more texture.


Some glasses are categorised as striker glass, which means they may appear clear or pale initially, but strike or change on firing to a different colour.  If you look at the red, orange and yellow frit above you can see this - the red looks orange, and the orange and yellow are almost indistinguishable from one another prior to the piece returning to the kiln. 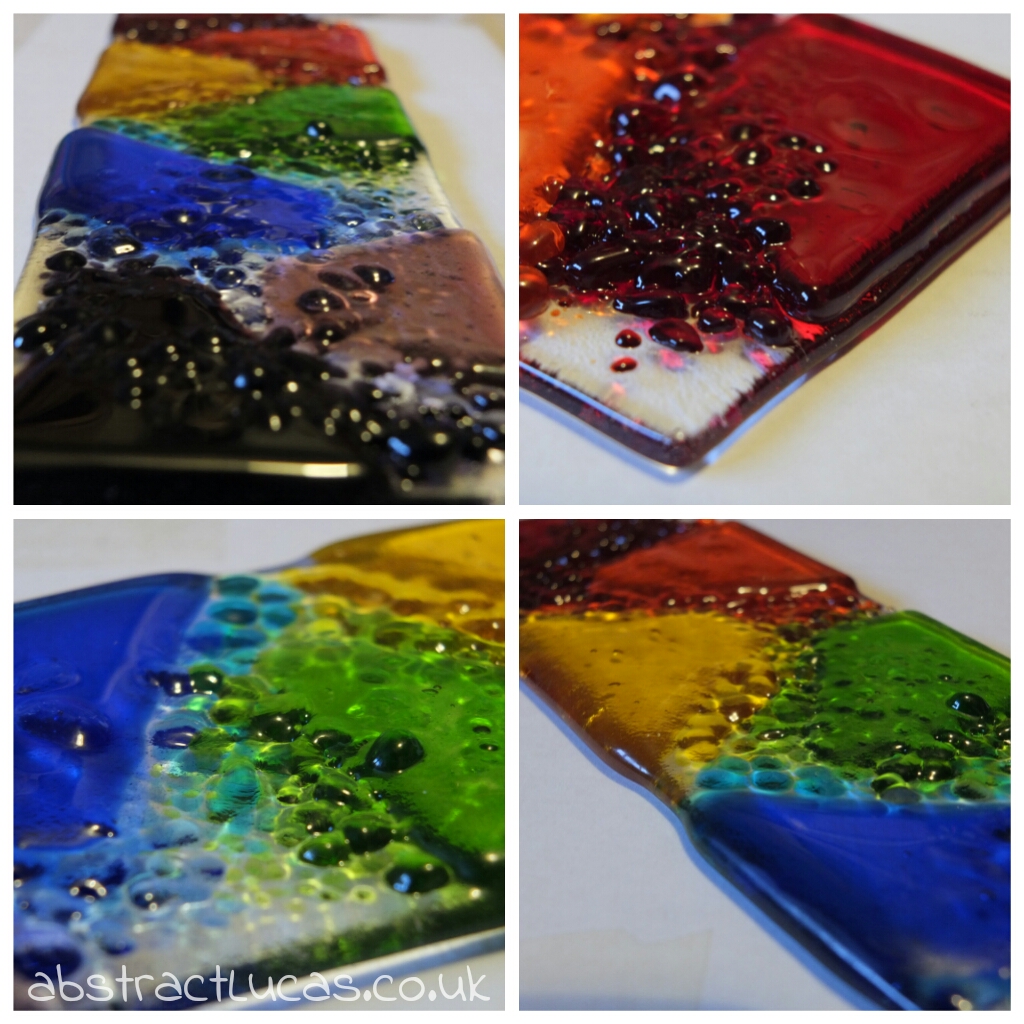 After firing you can see that the red, orange and yellow frit all struck as expected - they now match the main colour piece of rainbow that they were paired with.  The trickiest part of using striker glass is that you can't always tell the difference between two colours until after they're fused, so I ended up with two tubs of coarse frit in front of me, a teaspoon in my hand, and wasn't sure which was which!  As Warm Glass label their tubs clearly with the colour and grade of frit I only needed to look at the labels, but I'm sure at some point I'll mess up and end up with an unconventional rainbow!


The two seascape lightcatchers were set up slightly differently to one another to experiment with different effects.  With one lightcatcher I filled most of the gaps completely, while with the other I was more selective, leaving sections unfilled. 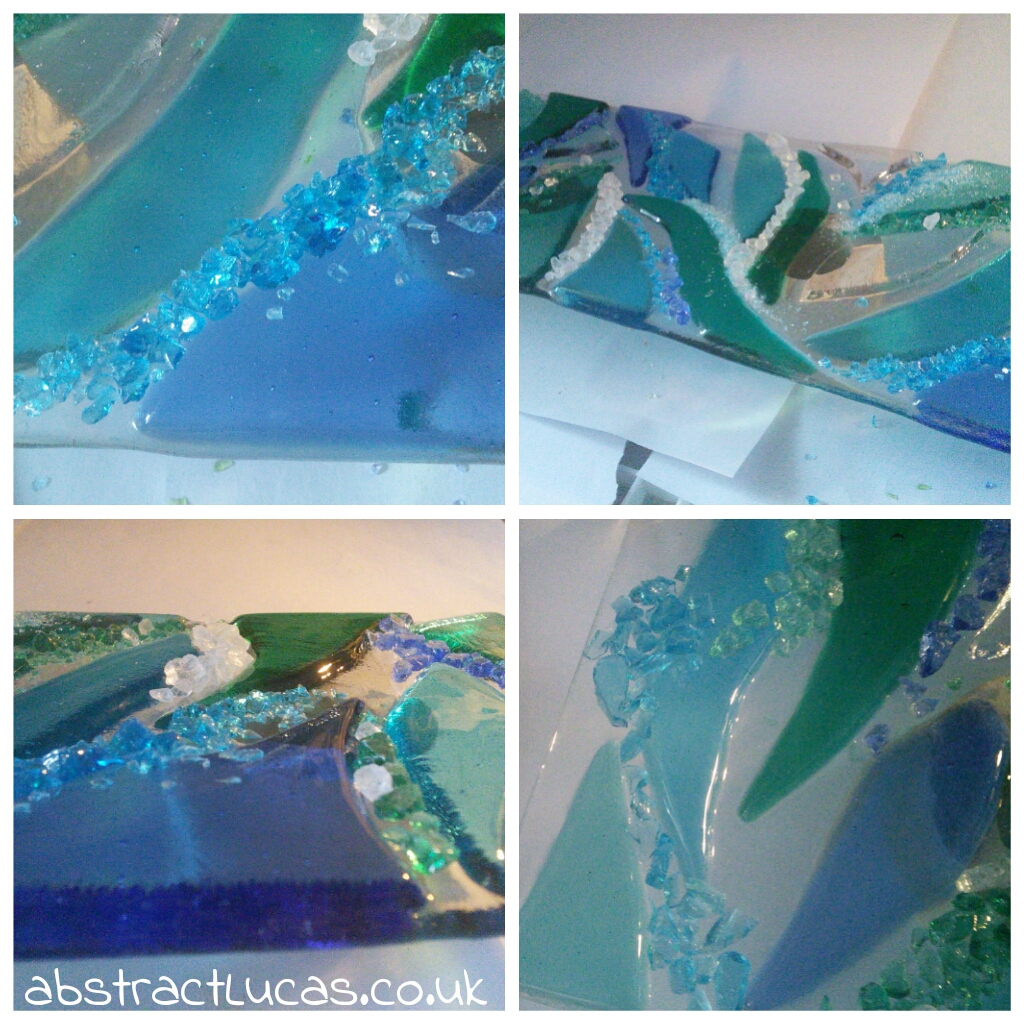 I think this selective approach worked really well - it gave the impression of the swirling water that I was hoping for, though I think I'd pile the frit higher another time to increase that gritty separate texture. 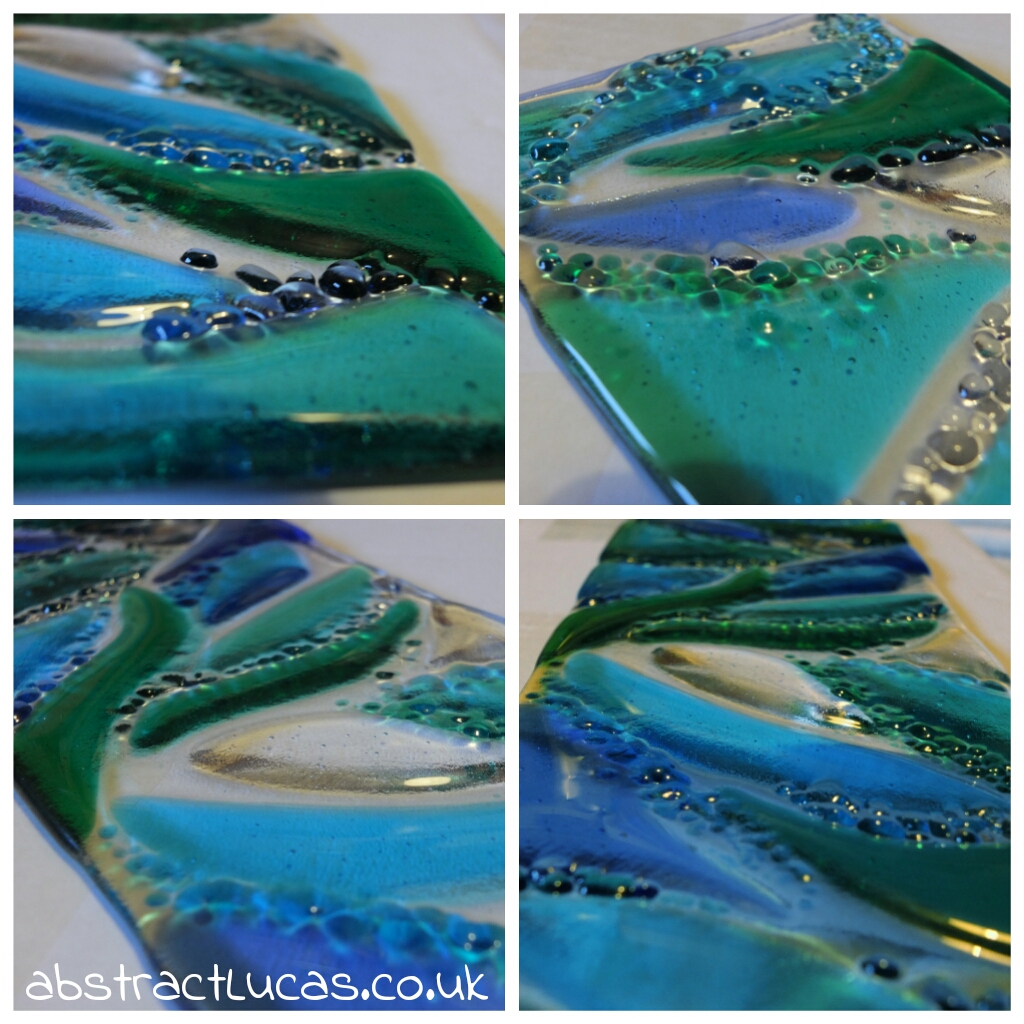 These are some close up shots of the more densely fritted (not a real word but YKWIM) lightcatcher - you can see what I mean about piling up the frit so there's plenty of separate pieces.  I prefer the lightcatcher with more spaces, as I think this adds another dimension and will give a greater range of colours when the light shines through. 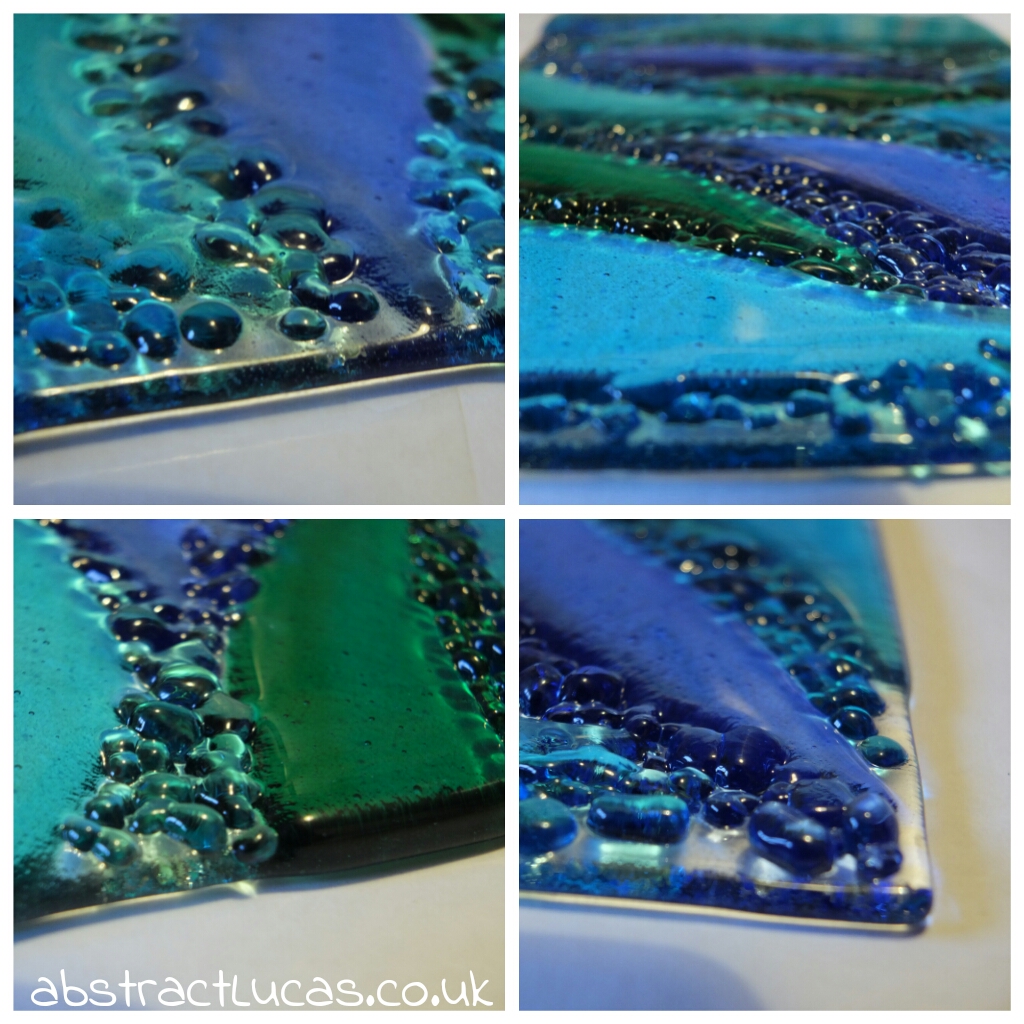 The other lesson that I've taken from this process is to do with the kiln firing. Next time I will only tack fuse the shapes in the first firing instead of contour fusing, as I did with these.

A tack fuse reaches a lower temperature and so the glass softens enough to permanently join the pieces but only blunts the sharp edges.  The second firing then will smooth them a little more but leave them defined, and of course round off all the pieces of frit, instead of smoothing the main pieces out to almost a full fuse, with very gentle slopes.

The advantage to having my own baby kiln at home is that I can run firings when it suits me, and with the programmes that I want.  This makes the 'work it out by experimenting' much easier, and as long as I ensure I note down the results each time then even if things don't go to plan, I can still use the results to inform future decisions on programmes.

It's at the "as long as I ensure I note down the results each time" stage that there's room for it all to go wrong though...