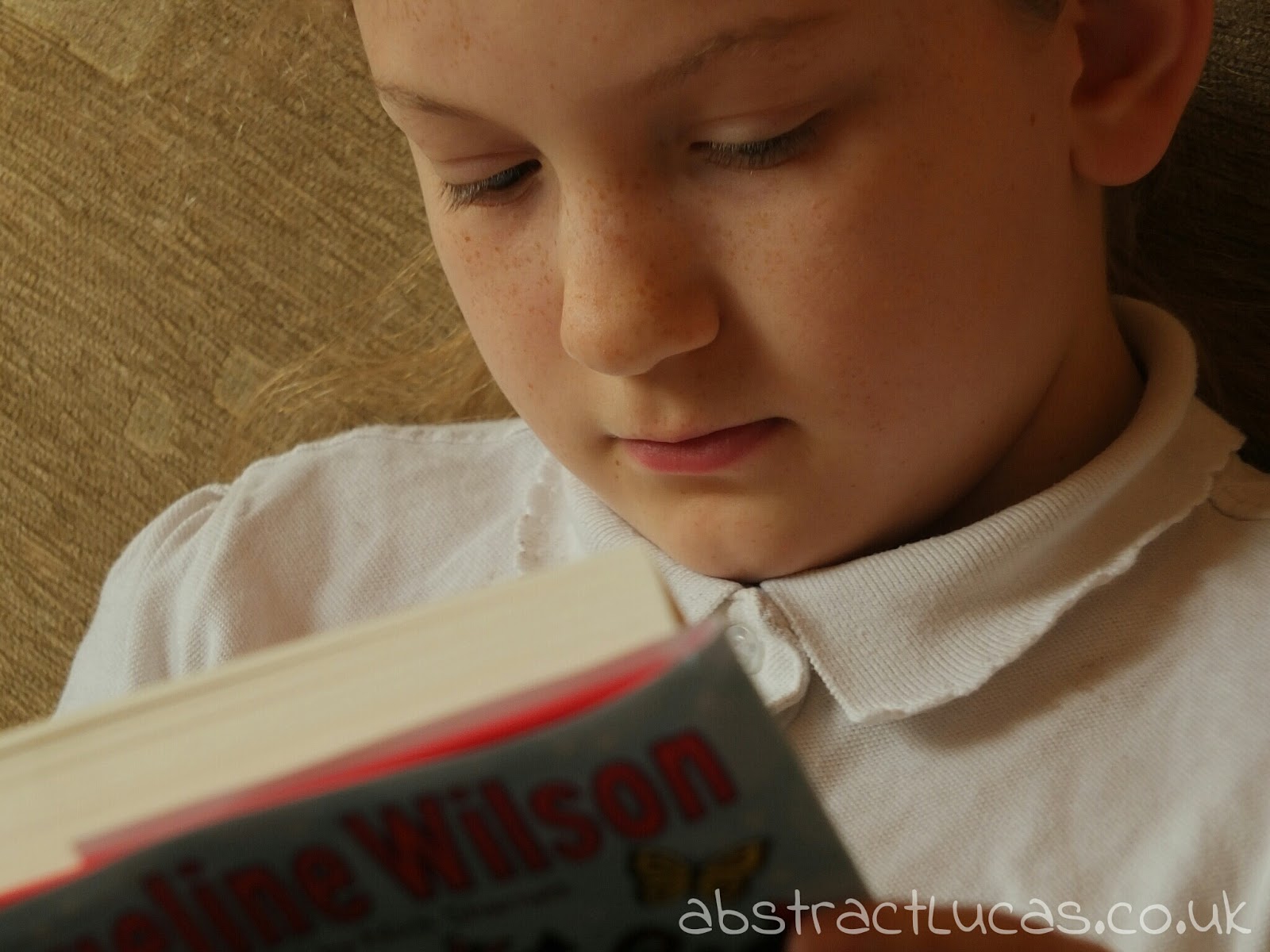 Petal loves to read, and was thrilled to get the opportunity to review a book from the hugely popular and prolific children's writer, Jacqueline Wilson.  Petal kept the book in exchange for her review and has promised to be truthful sharing her thoughts and opinions.  I copied some standard book review type questions from this wonderful web of ours and Petal typed up her responses.  I've cut and pasted them here, but they're her own answers in her own words (even though I was very tempted to edit them, I didn't.  Honest.)

Summarize the book without giving away the ending.


There are three triplets and they go into year three with scary Miss Lovejoy. They try to sit together but Miss Lovejoy splits them apart and sits Tina (one of the triplets) right next to Selma, the huge, mean bully of year three! Tina hopes that one of her friends will sit on the same table as her but instead there is just loads of boys. Together, Selma and Tina make a beautiful butterfly garden! They become BEST buds! Tina discovers why Selma is always so mean...... 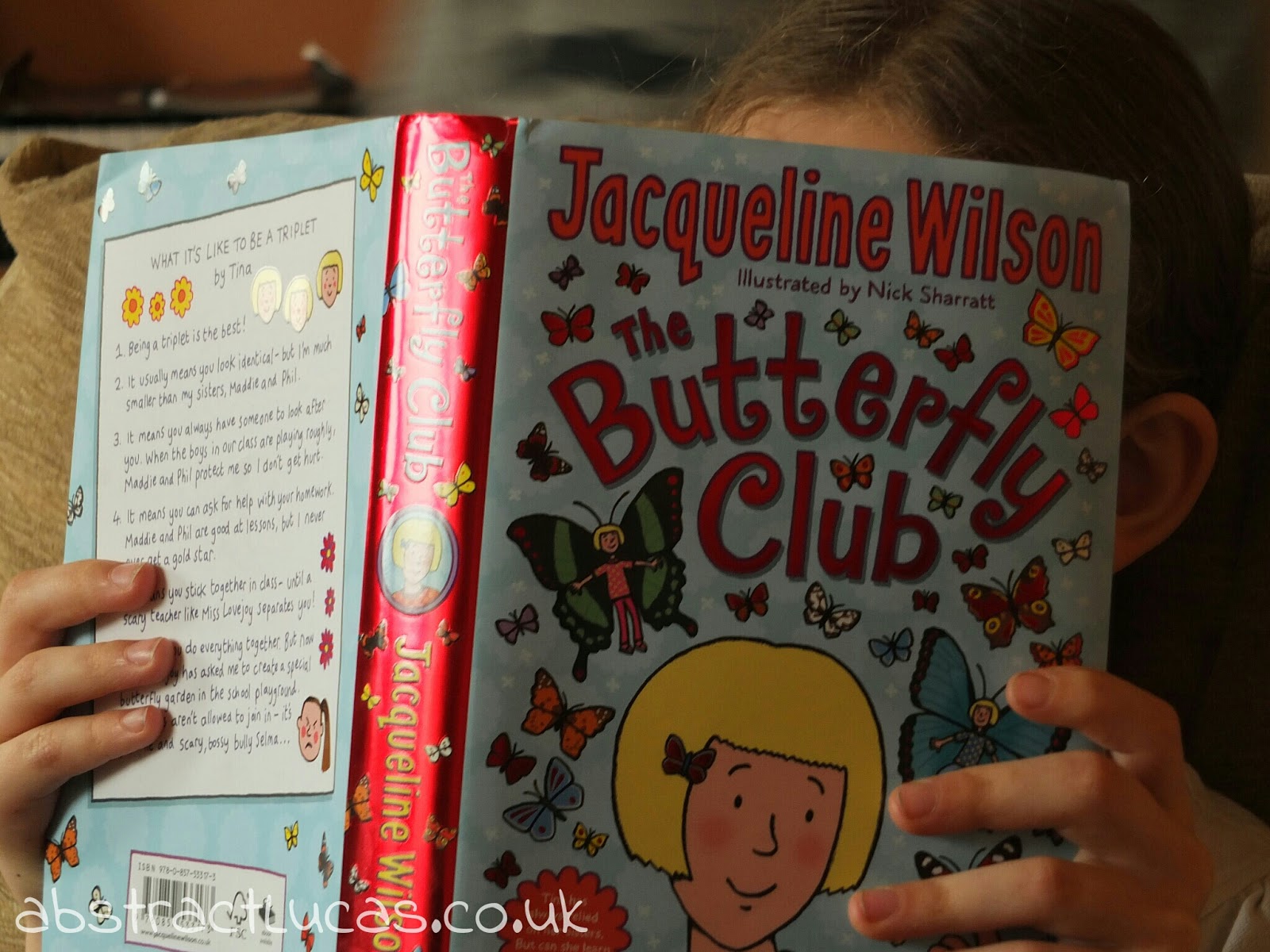 What did you think of the main character?

I really like Tina but I feel SO sorry for her. She has NEVER been climbing or climbed a tree! She also NEVER plays football!

Which character could you relate to best?


I could probably relate best to Tina because she is the smallest and you think of her as the youngest even though she is a triplet. I am the youngest one in my family too. Tina enjoys doing things that I don't think are very interesting though, so in that way we are quite different, but maybe if she tried doing other stuff then she would realise how fun it is.

Were there any other especially interesting characters?


I think that Selma (the other main character in the story) is a very interesting character. Everyone thinks she's really mean and she does behave in a really mean way at the start but as the story carries on you find out why so you sort of understand her more.

From whose point of view is the story told?

It's told from Tina's point of view, and so it explains what she is thinking about everything that happens too.

Were the characters and their problems believable?


The characters were believable because although triplets are very rare they still exist in real life. I don't know what it would be like to be a triplet but reading this has made me think about the sort of problems I would have extra if I was, as well as all the problems and difficulties that everyone has.  All the things that happen in the book could be real, there isn't any magic or anything like that.


How did the main character change during the novel?


Tina got a lot more confident throughout the book and she also got more independent and wasn't relying on her sisters to do everything for her. At the start her sisters were her absolute best friends but by the end she was best friends with Selma, and she didn't worry or feel lost or scared when she wasn't with her sisters. 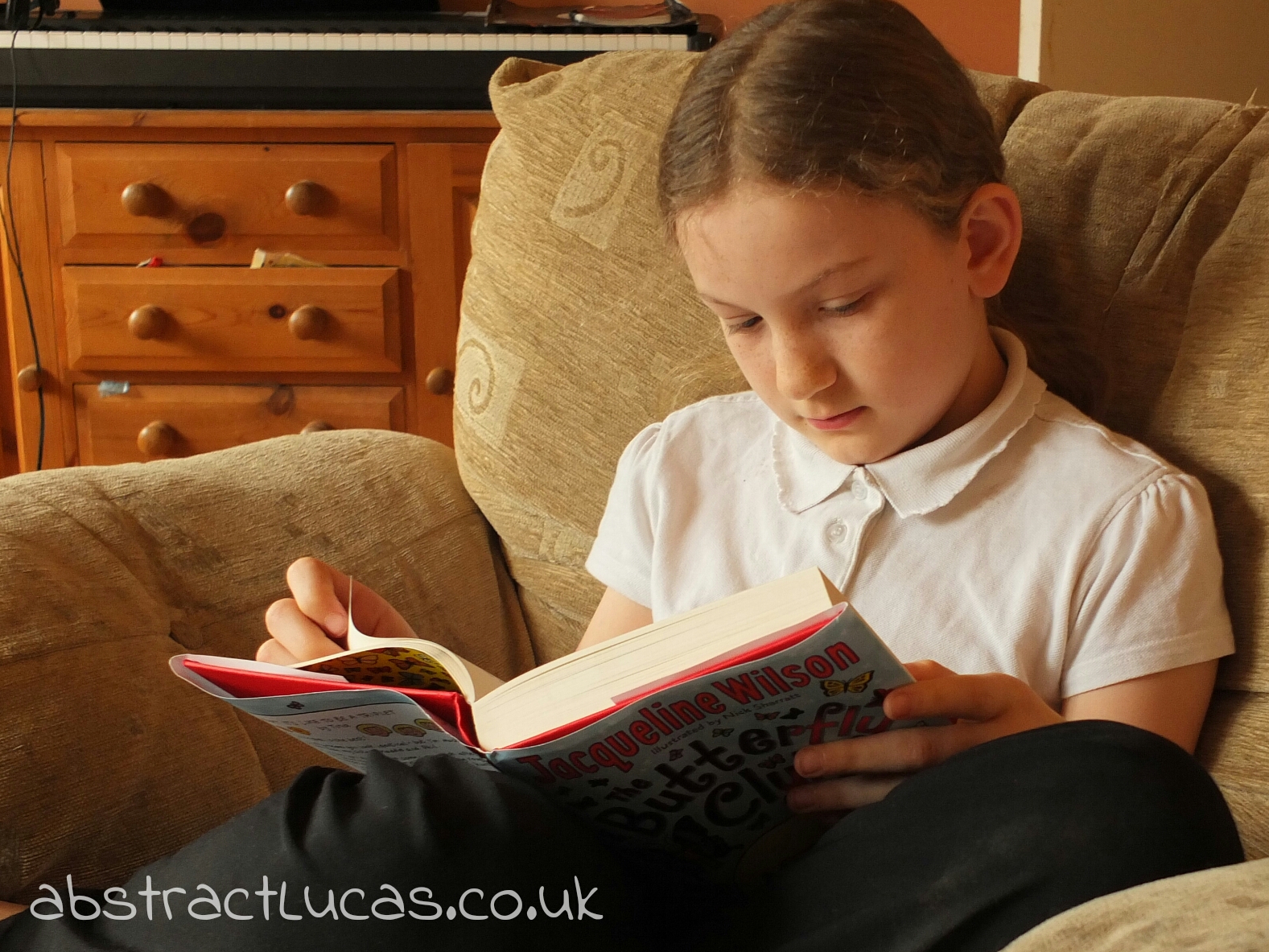 Did you learn anything new from the book?


I learnt that even if for all of your life you have relied on one or two people to do everything for you, you can change that and start doing things without them. I already knew that sometimes people might seem to be mean or be kind but actually be the opposite but some people might learn that from this story.

Was the book different from what you expected?


It was a bit different from what I expected because I thought that Tina would stay with her twins the whole time but she didn't. I thought the story might be about her working out how to get sat with her sisters but it was about making new friends instead.  I've read lots of Jacqueline Wilson books before though so I sort of knew the kinds of things that would happen and that it would all be okay at the end of the story which it was.

What alternative title would you choose for this book?

I would chose to call it The Butterfly Garden Friends.


"They are not actually wild beasts, they are hamsters." and "We decided that we really, really liked being seven." are my favourite quotes from the book, especially the hamster one.


I liked that they meet Ruby and Garnet (from another Jacqueline Wilson book) at the end. I knew everything would work out for Tina at the end and it did.

Would you recommend this book?  If so, who to?

I would recommend this book to people who like Jacqueline Wilson books and are a bit younger than me (I am ten) because I read it in less than one day. 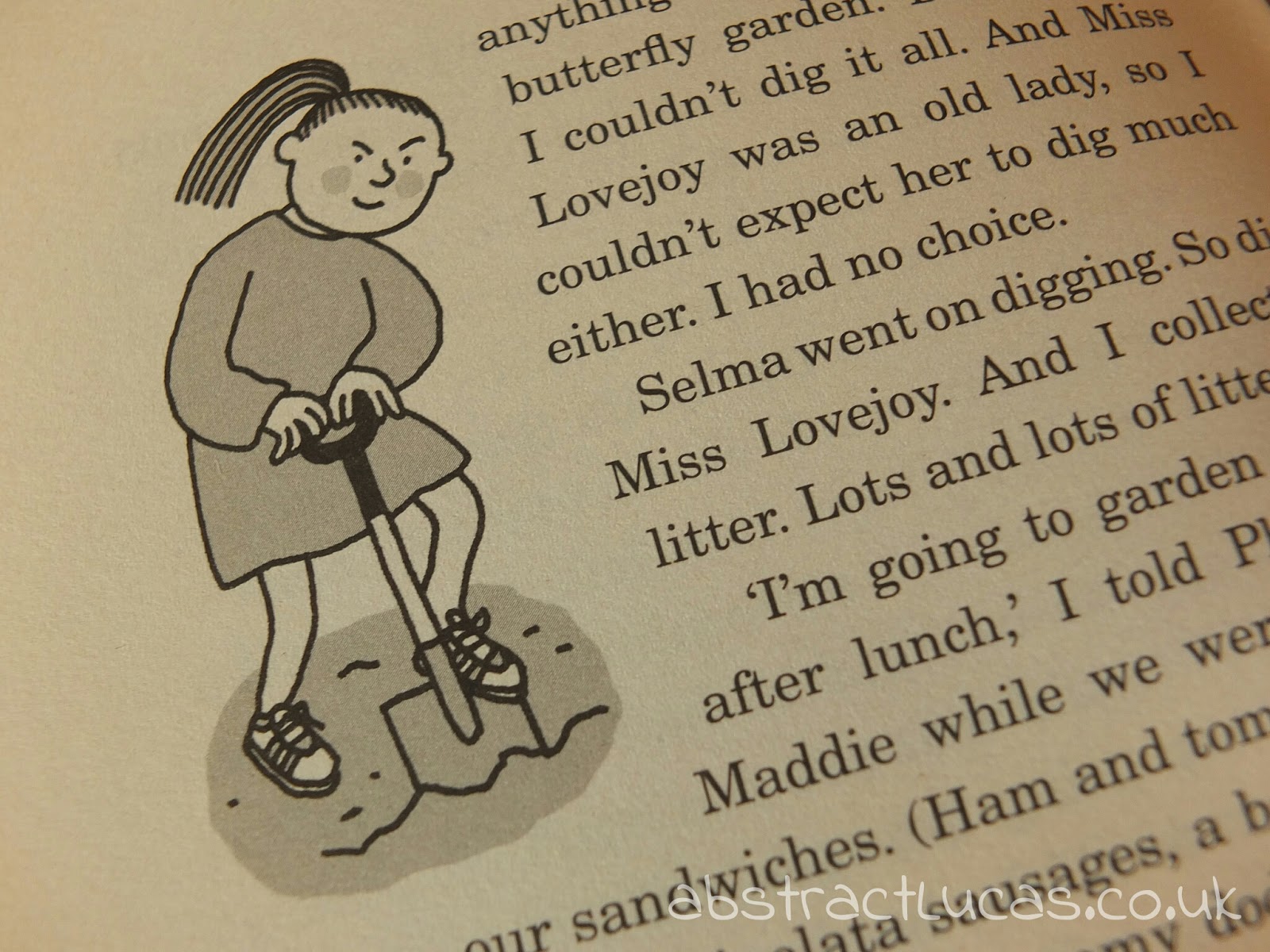 Is there anything else you'd like to say about the book?

The triplets are starting year three at the beginning of the book, and I think it is probably meant for people to read who are about that old or maybe a bit older. I really really love Jacqueline Wilson books but I think I'm getting a bit old for them because they are a bit boring for me now and they have pictures in with the writing which makes it seem like they are for people that are younger than me. But I did like it. Also I really liked the inside of the cover where all of the butterflies are. 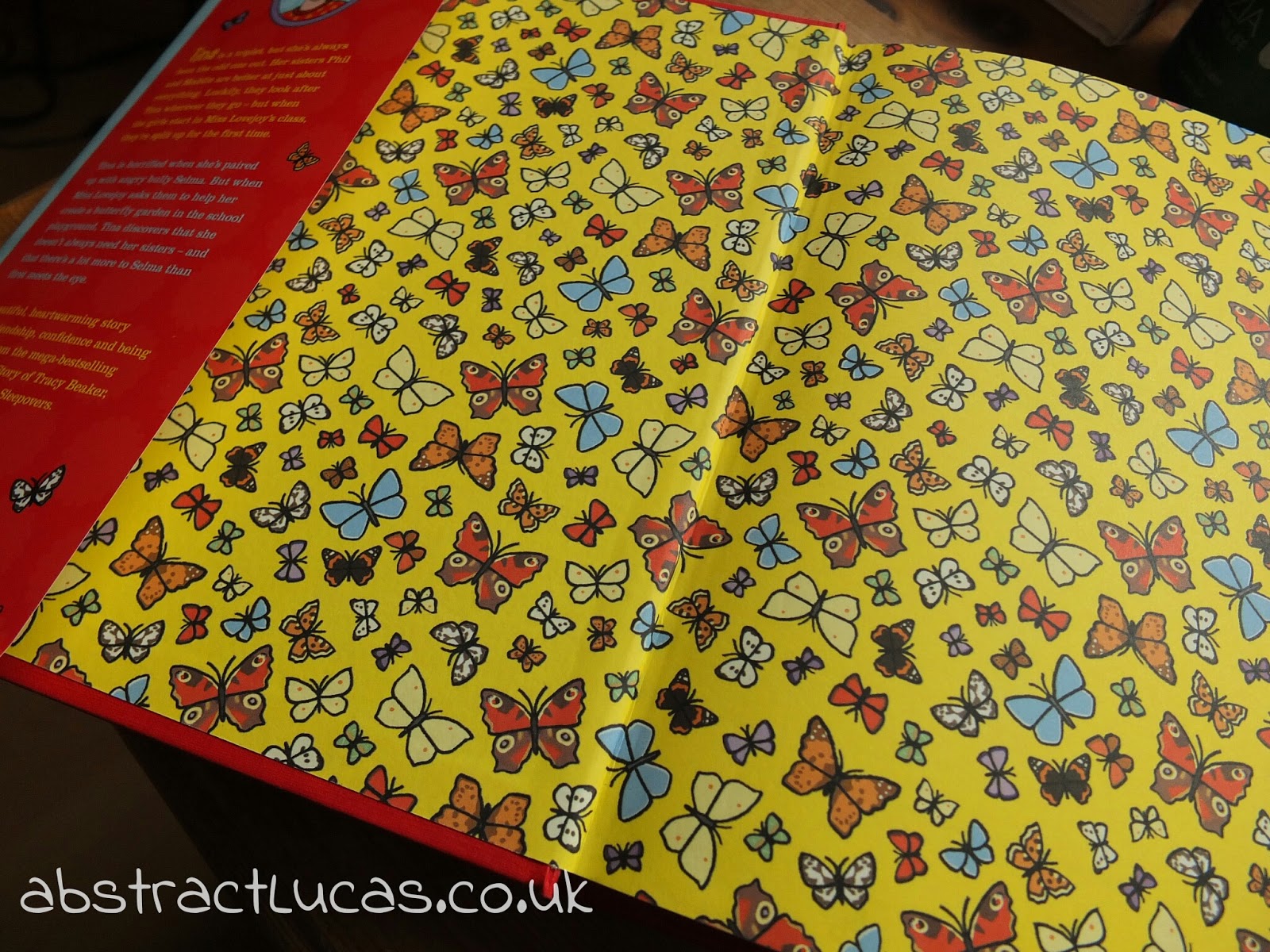 How would you rate it? 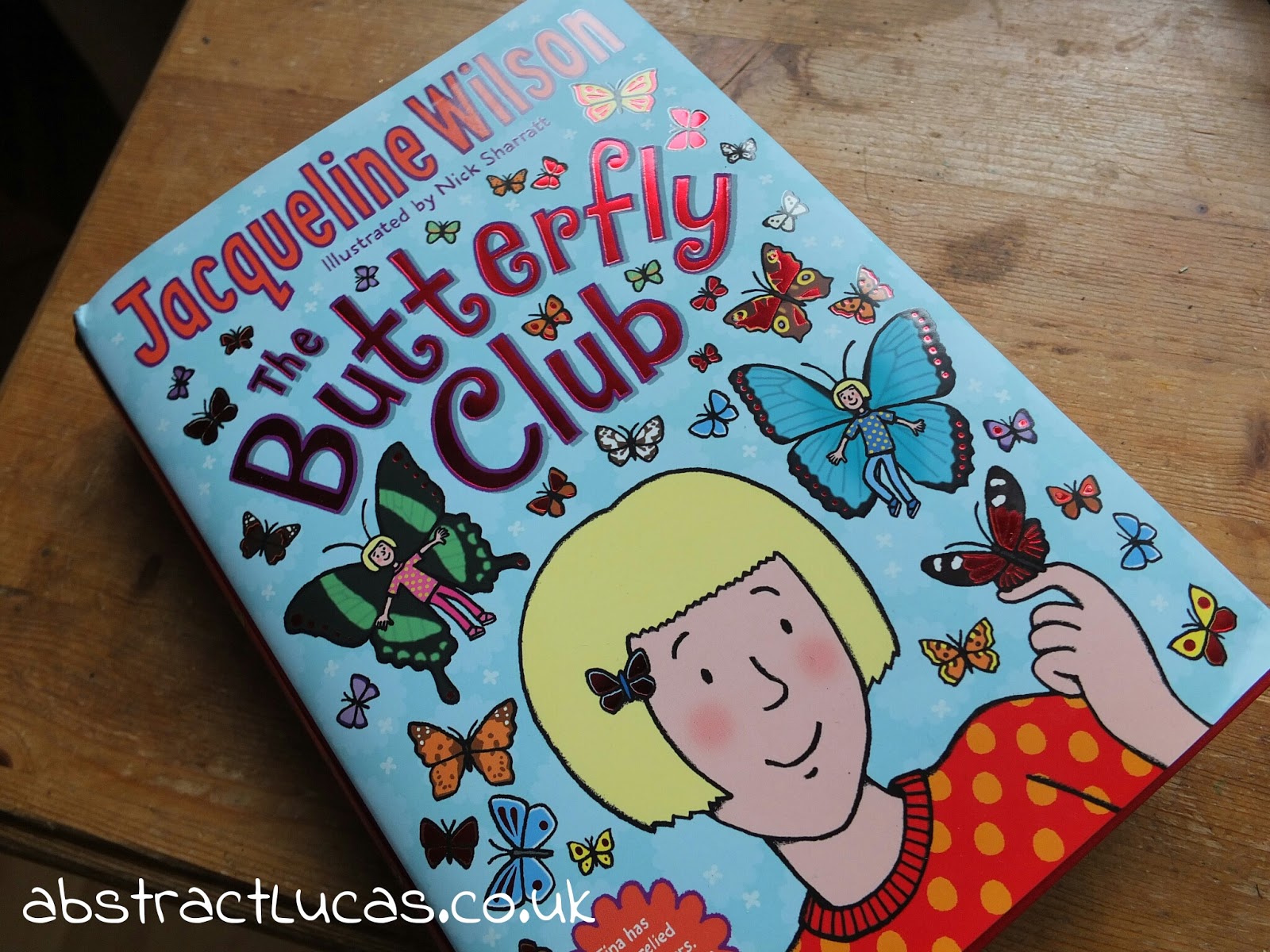 It's available on Amazon as a hardback or an ebook, and you can watch the author herself introducing the book on you tube.