We started off (after my house news, which turned out not to be very newsy - short version is offer followed by refusal followed by another offer followed by still waiting!) taking about why it's important not to look out of the window on a dull, grey day, and let that put you off of venturing out with your camera.  Because the light outside is effectively diffused by the clouds, it can be great for portraits, as well as macro (close up) shots.  The typical British spring showers can add an edge too - think dew on a cobweb, reflections in wet pavements, or even panning shots of people with bright umbrellas.

To prove the point we decided to get out of the room, but as it was freezing we invaded Bristol Cathedral on College Green to get some practice with long exposures.  A quick refresher of the settings we were going to need to be fiddling with first :
●  aperture priority mode so you control the depth of field - a high number f stop (f/11 , or f/22 maybe) to capture the scale
●  set a low iso number (100 iso will give the best quality) as on auto the camera will default to a high number iso because of the low light
●  try out different white balance settings - inside the Cathedral on auto the white balance often sets to tungsten (incadescent) because of the internal lighting

Remember the basics - a high f/stop gives a small aperture, and setting the iso low means the sensitivity of the sensor is limited, so the camera will set long exposure times in order to get enough light.  Consider using a self timer and putting the camera down on a solid surface to avoid blur caused by camera shake. 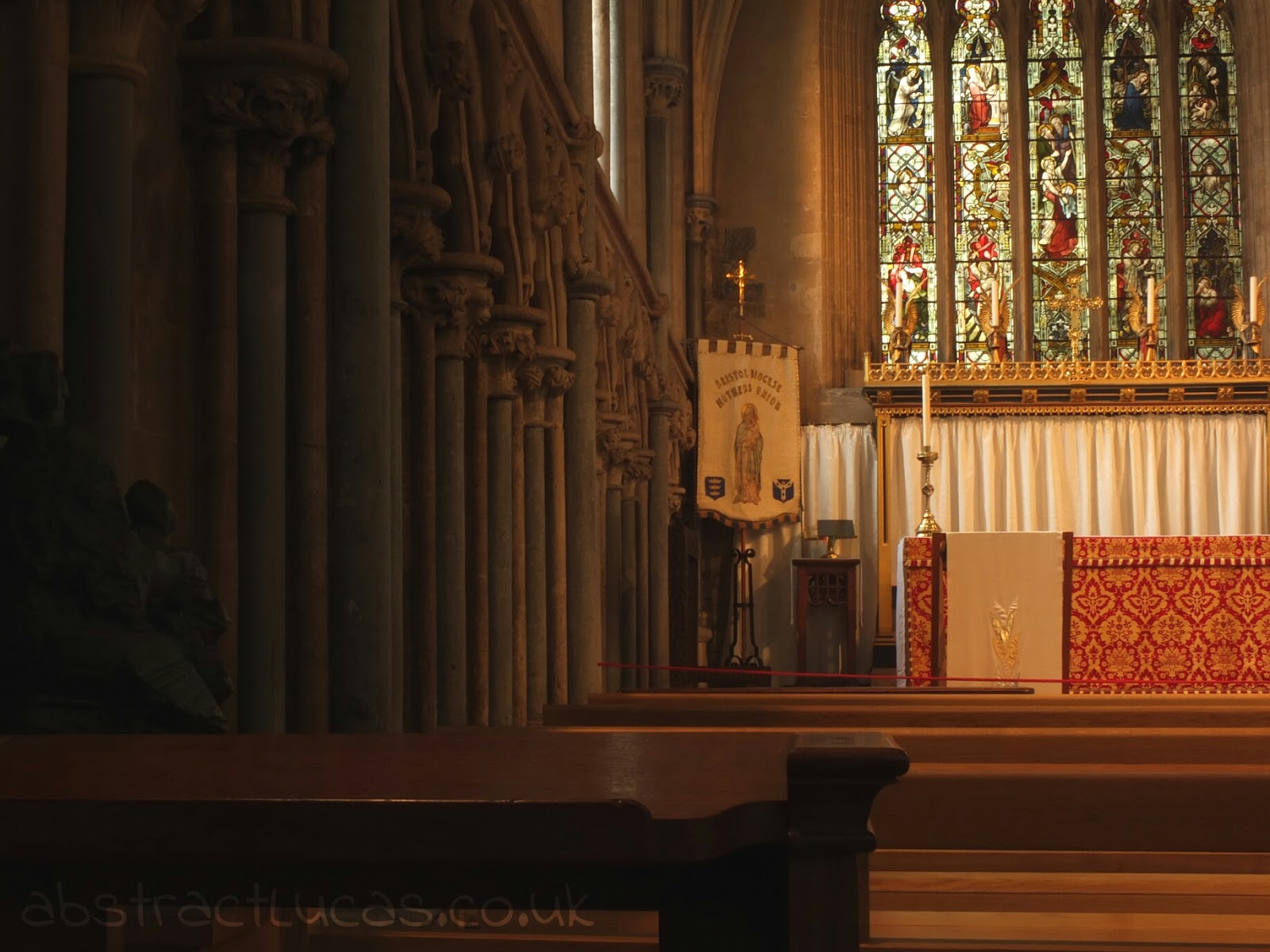 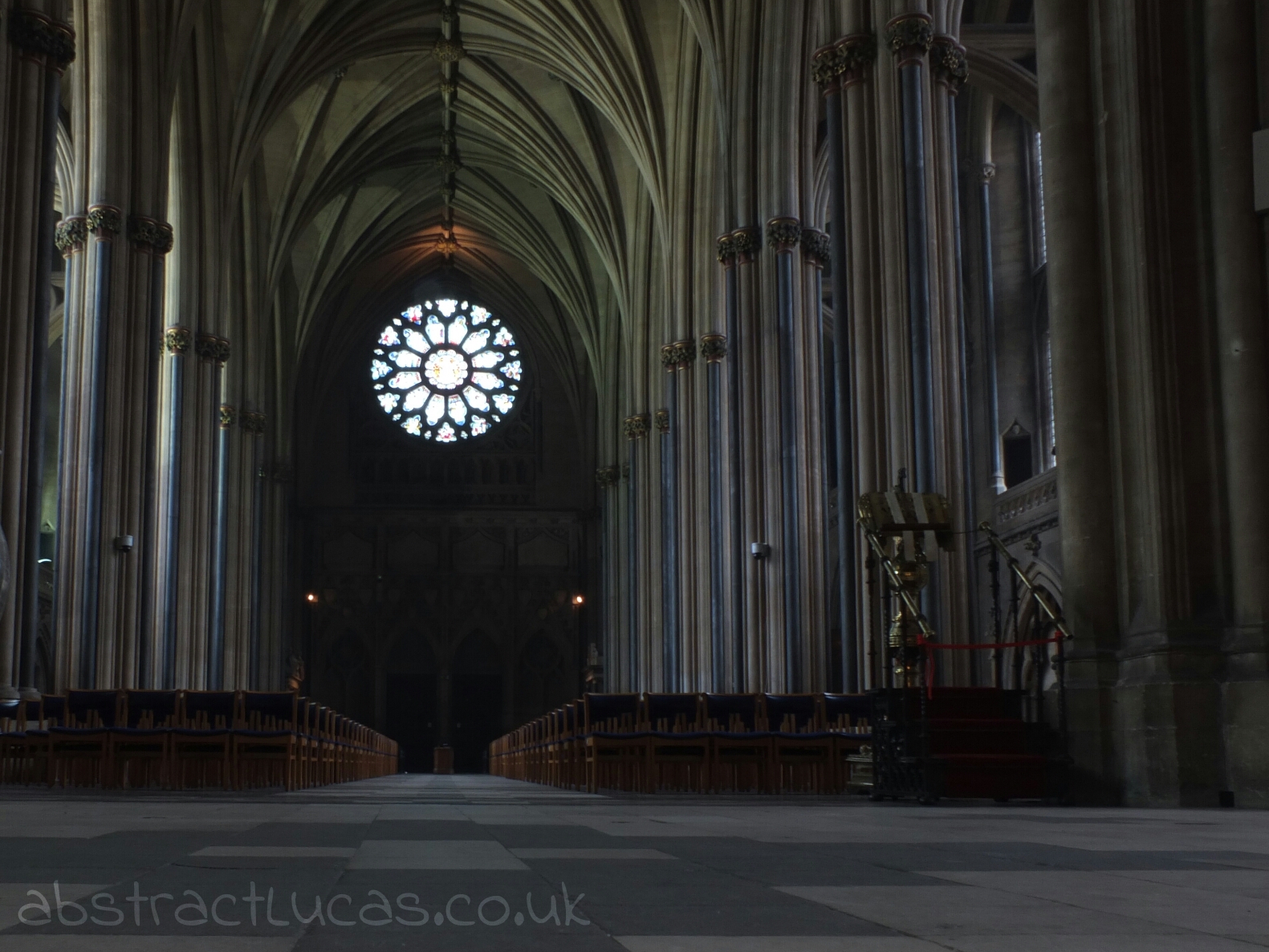 These were taken from the same position, with the camera on the ground to try and keep them as clear as possible.   The differences in colour are purely down to altering the white balance settings - the first is 'shade', the second 'incandescent' which is set to counteract the yellow tungsten lights.  I love the atmosphere in the second - very ethereal! 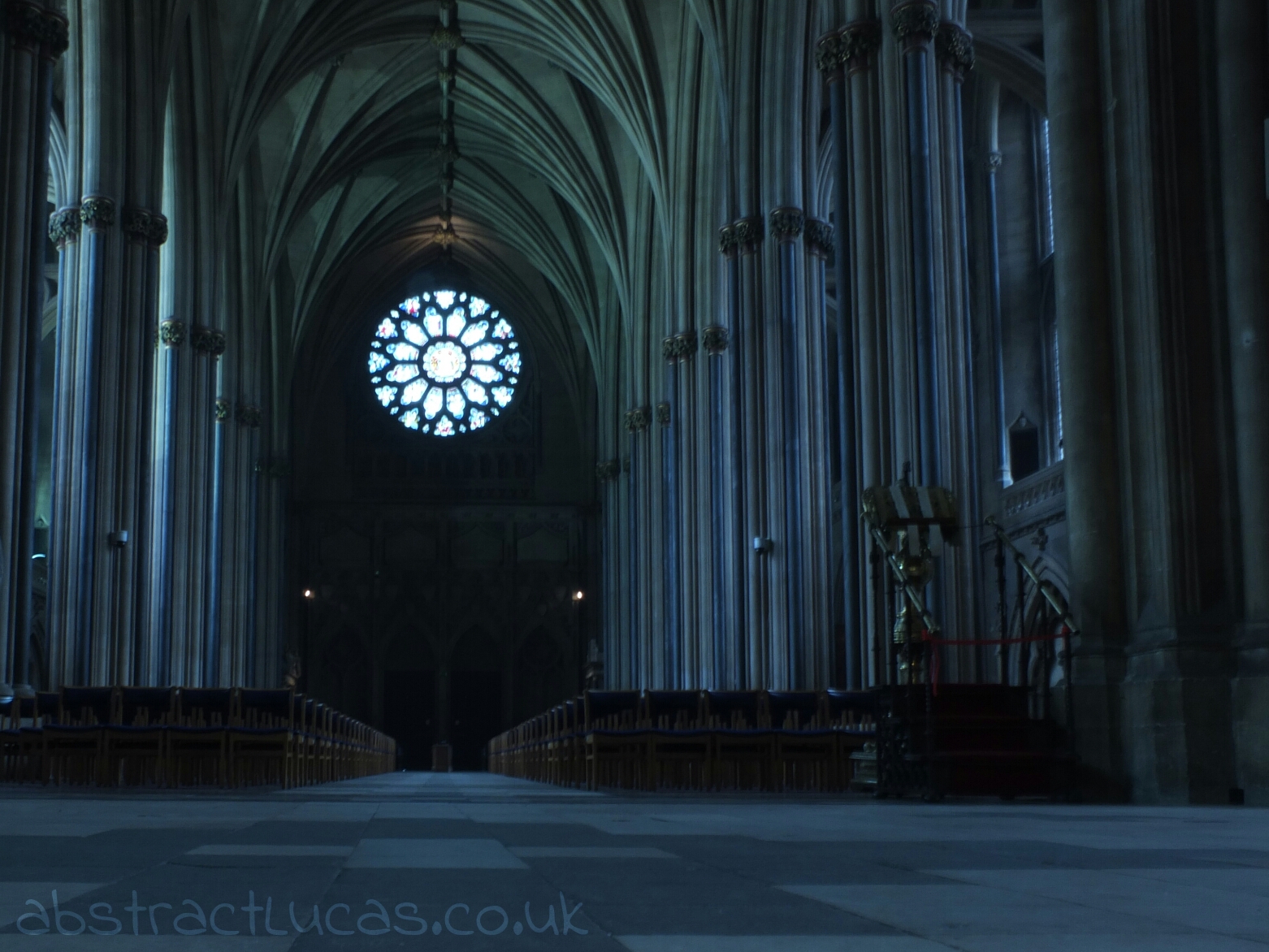 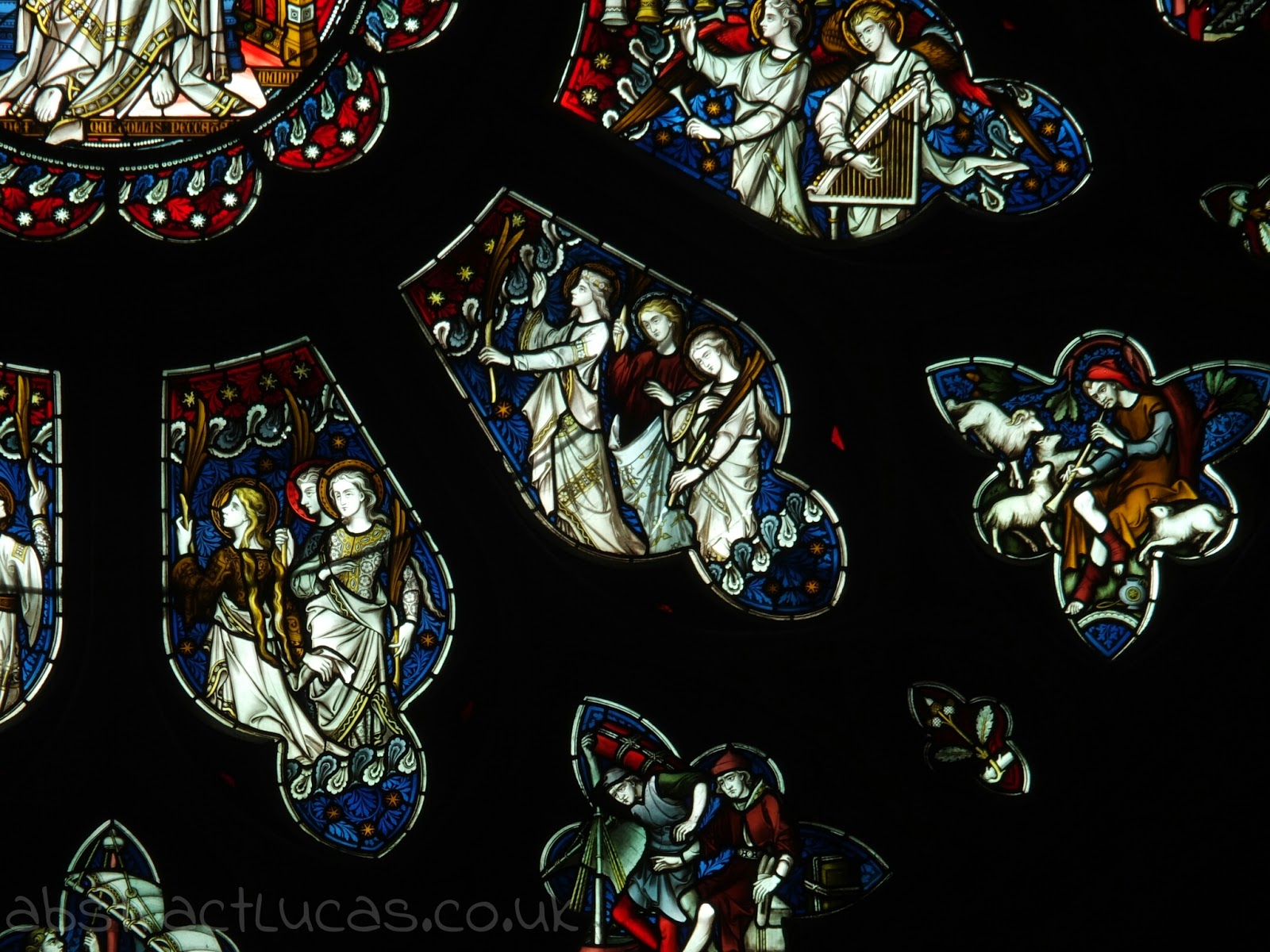 This was taken from the same position, but (obviously!) zoomed in.  I love glass, all glass, any glass, so the windows were bound to be a draw for me!  Bearing in mind the level of zoom and the low light conditions I was really impressed with the camera - both because of the detail and lack of camera shake.  I don't have a tripod, so rested the base of the lens on the lens cover and the strap (folded over on itself several times), which even with this long exposure was steady enough to do the job!

For this one I put the camera on a chair, pointing up at the ceiling.  As with the other shots I set a two second self timer so that I had time to depress the shutter release and get my hand away before the shutter opened, avoiding accidentally shifting the camera as it took the shot.  I love all the lines and shapes, and even the highlights through the windows providing that contrast with the shadier depths (or I guess heights?) of the roof. 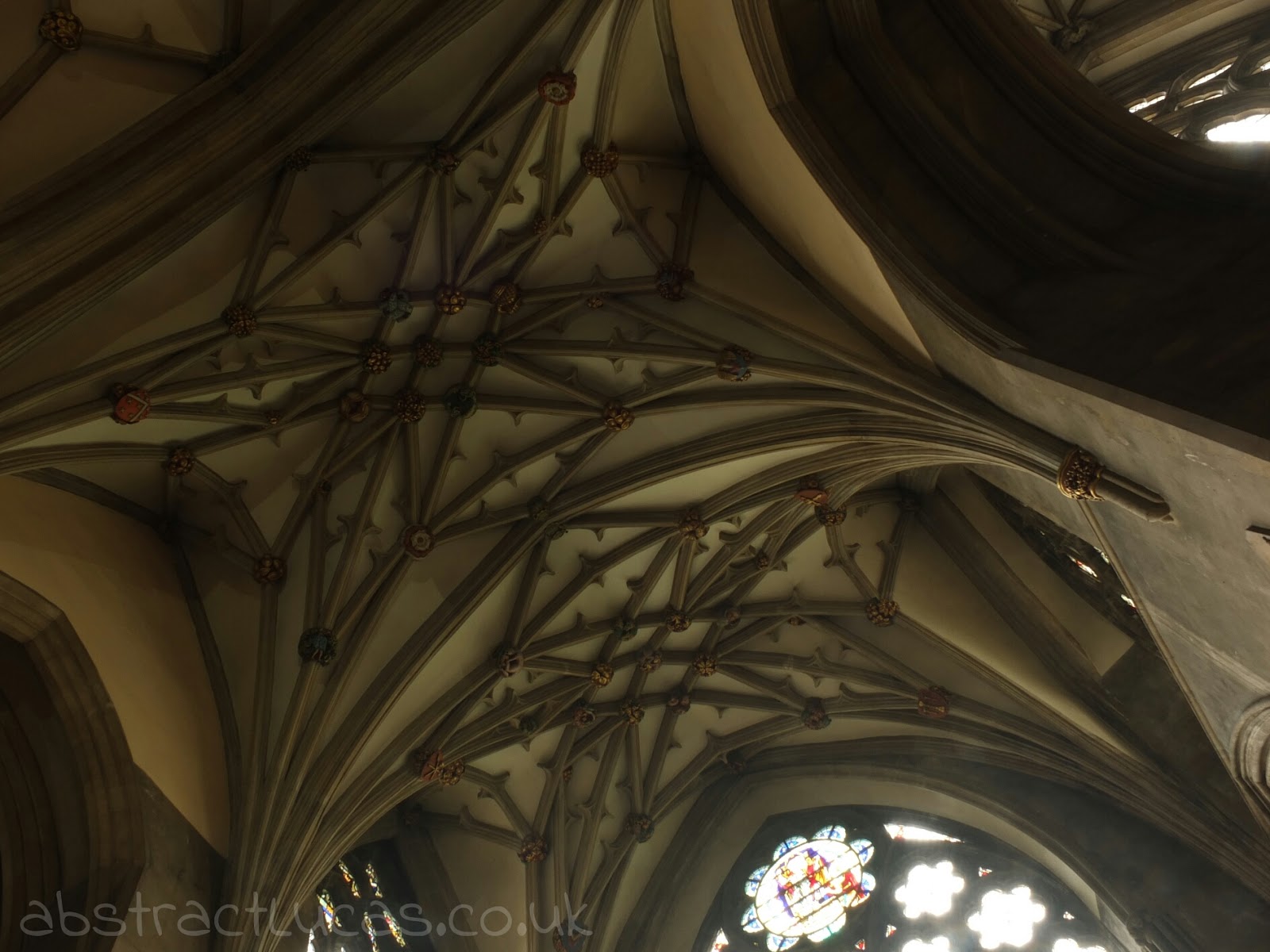 
This was right at the end,  when we were literally on our way out.  What can I say - I'm a sucker for rusty watermarks on stone - look at all those colours... 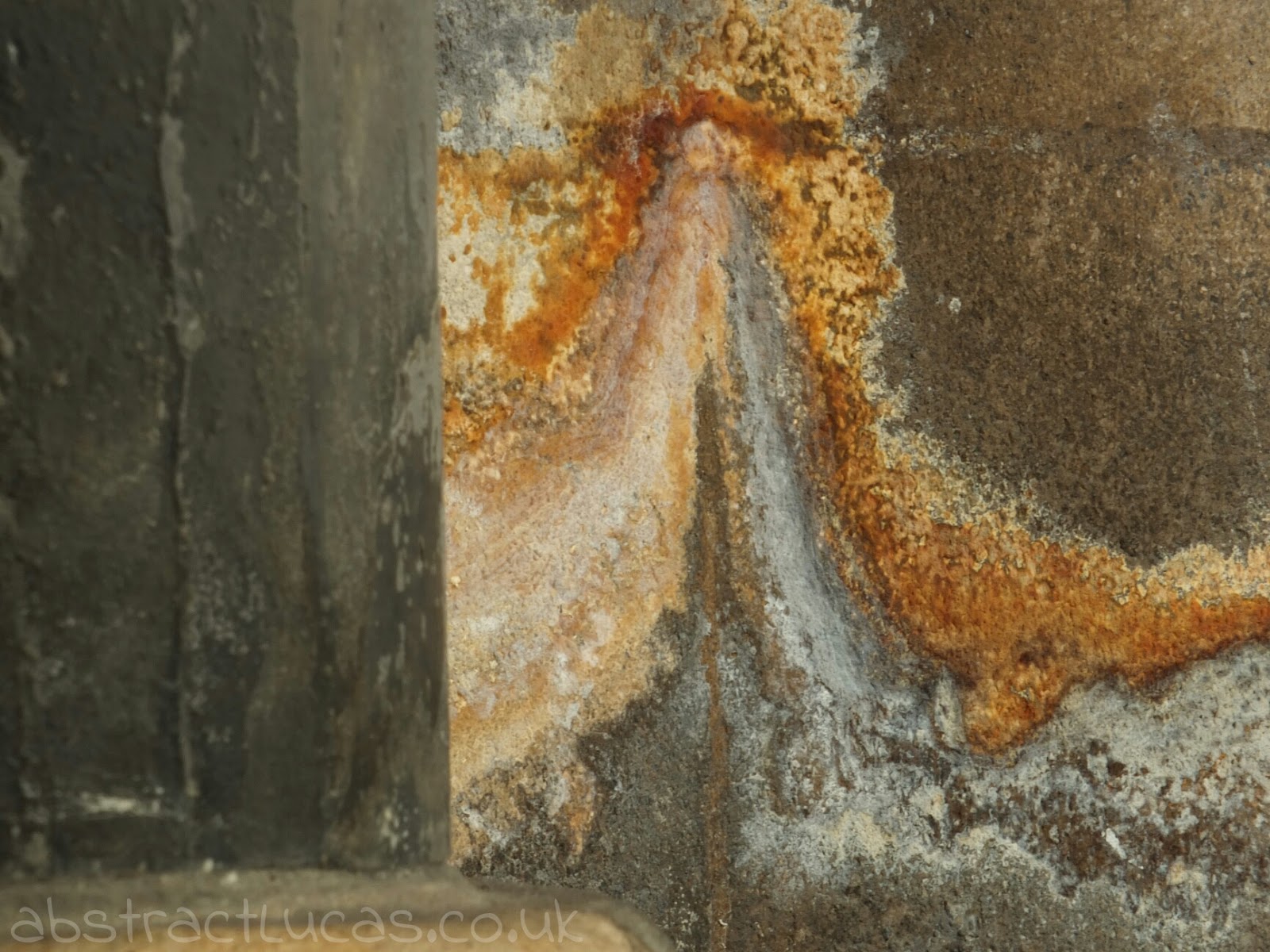 
After a coffee and croissant pit stop Graham gave us a new task - to find letters.  Apparently taking a shot of the letter on a sign or notice didn't count, so we had to be a little more imaginative. 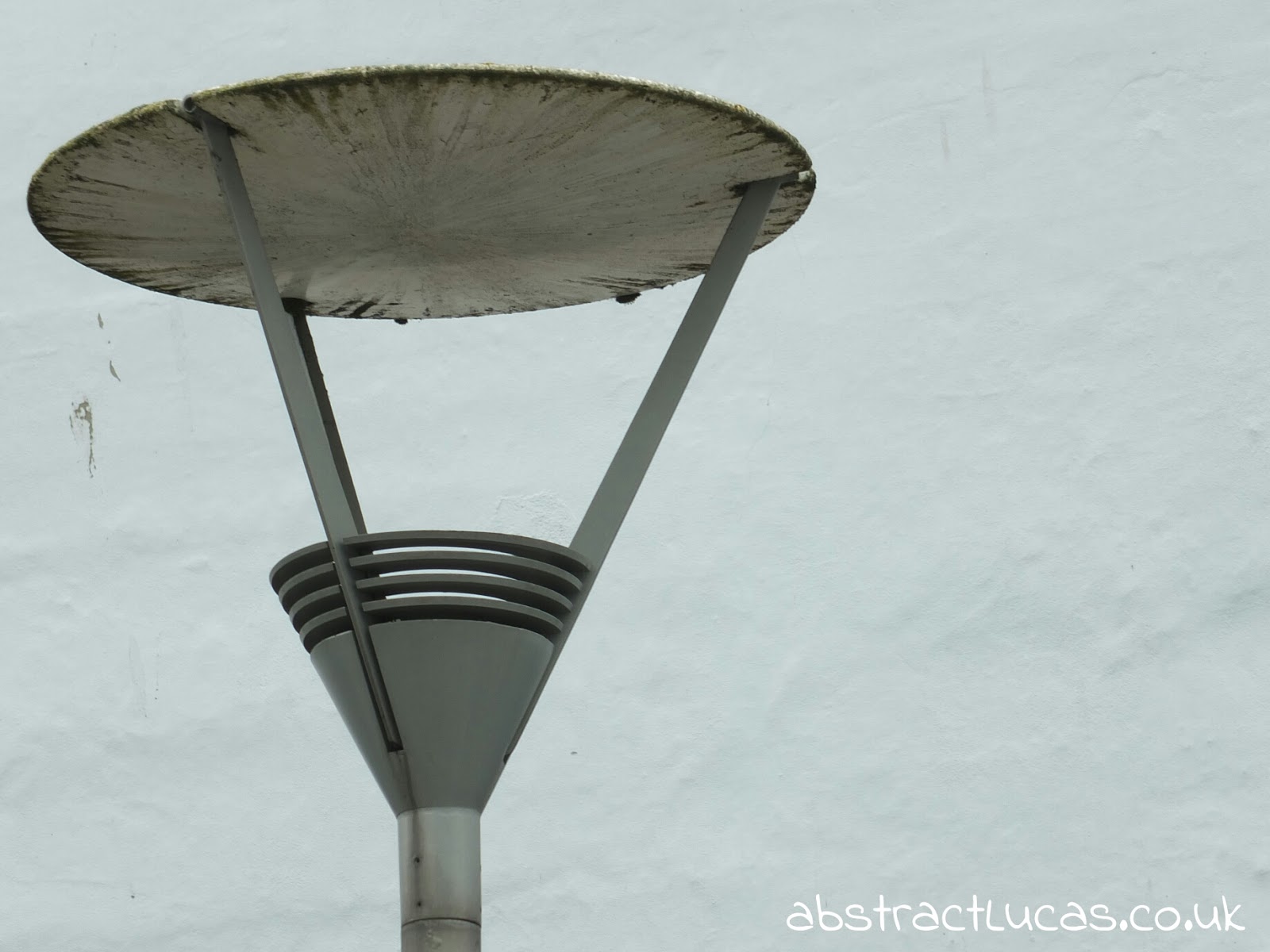 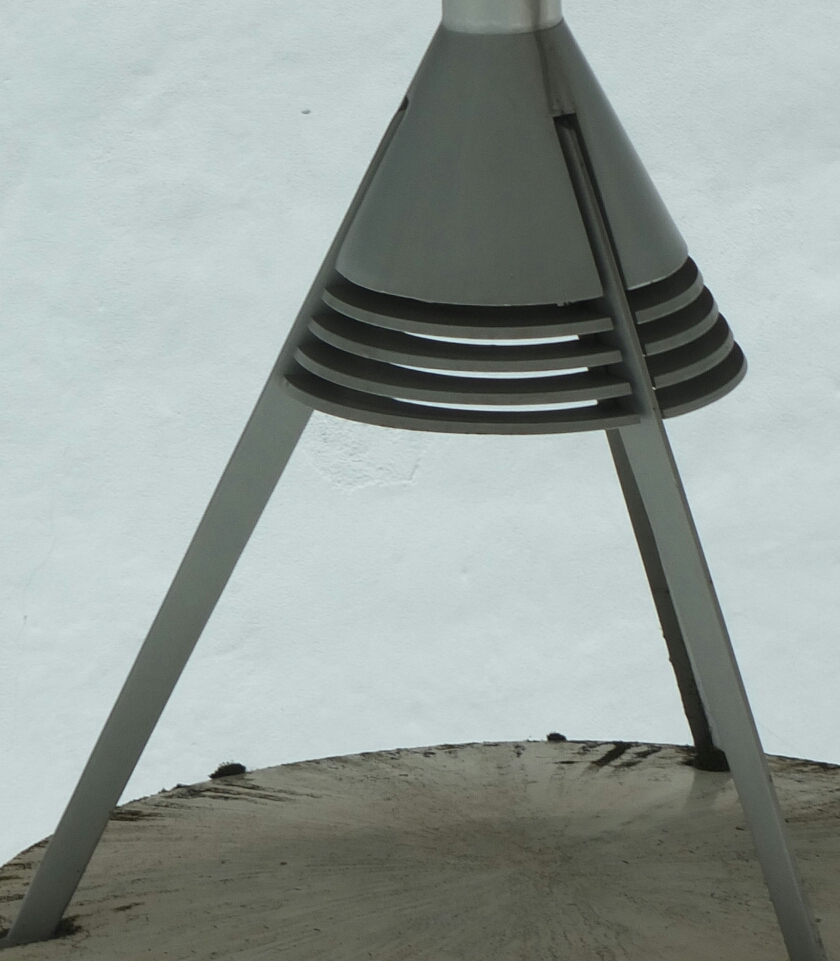 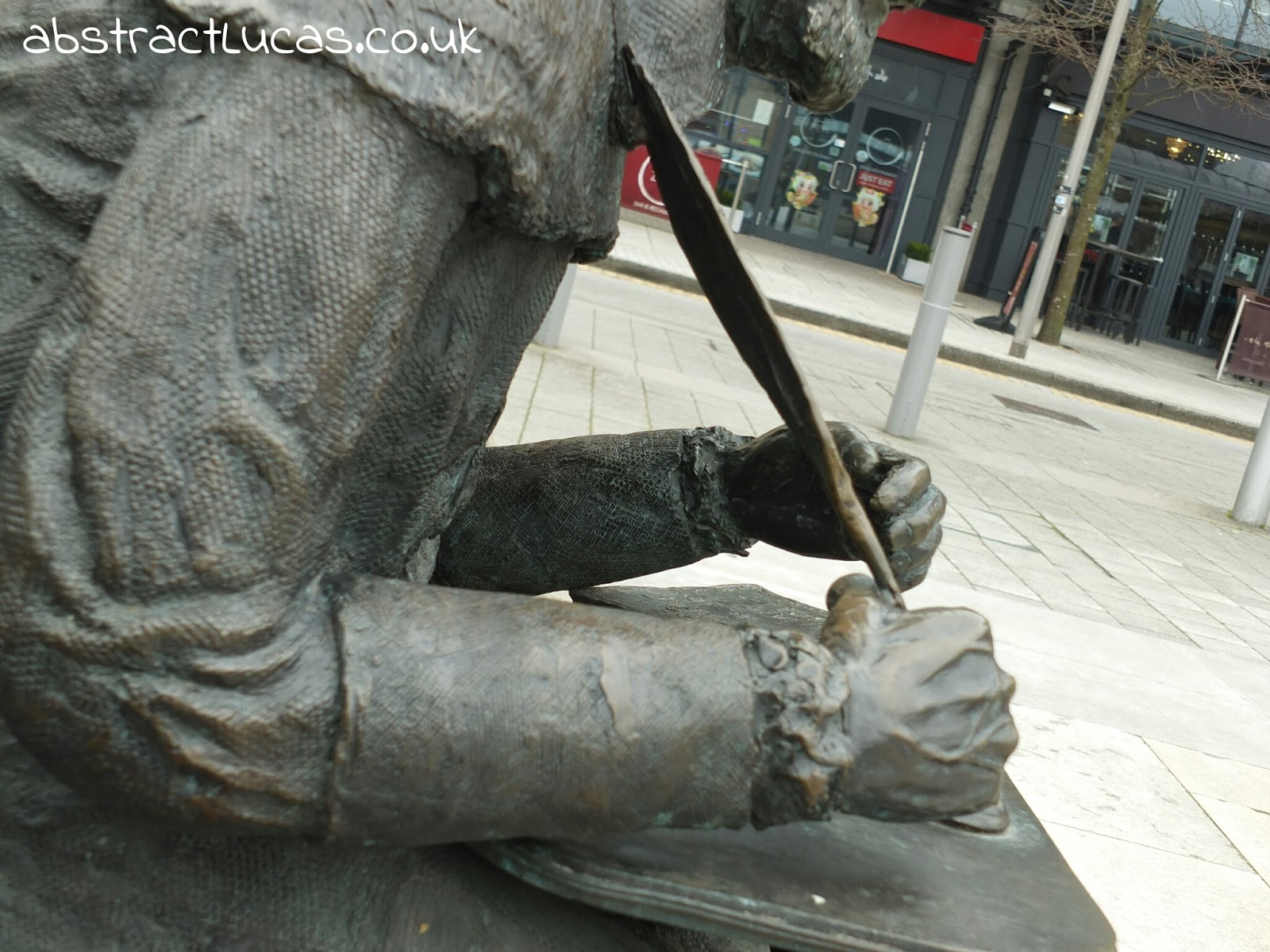 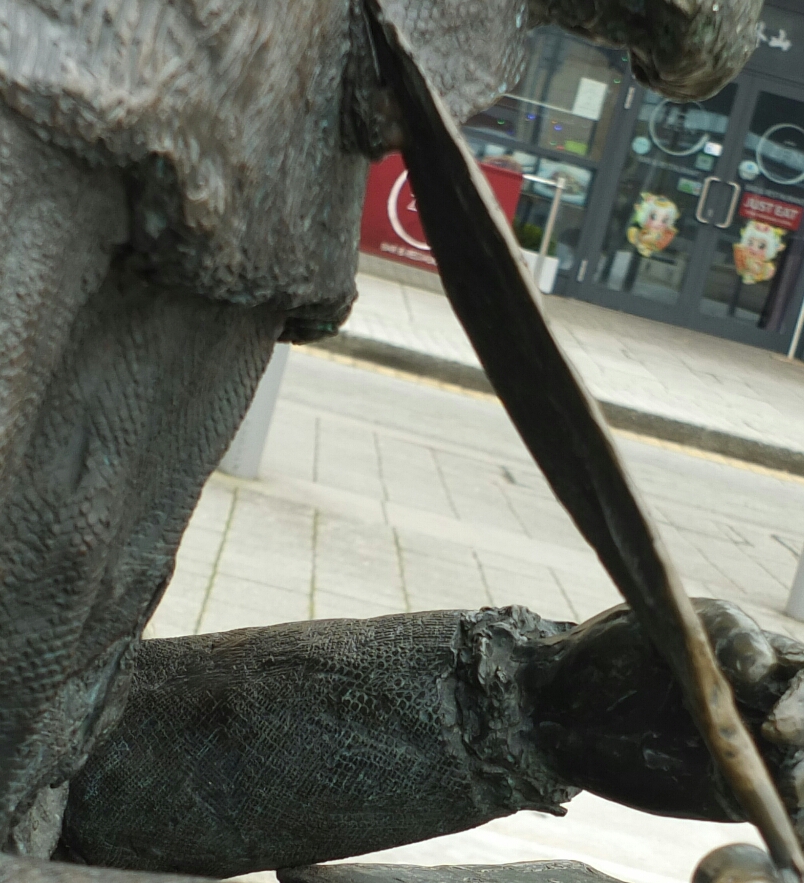 I found plenty of letters, including this M... 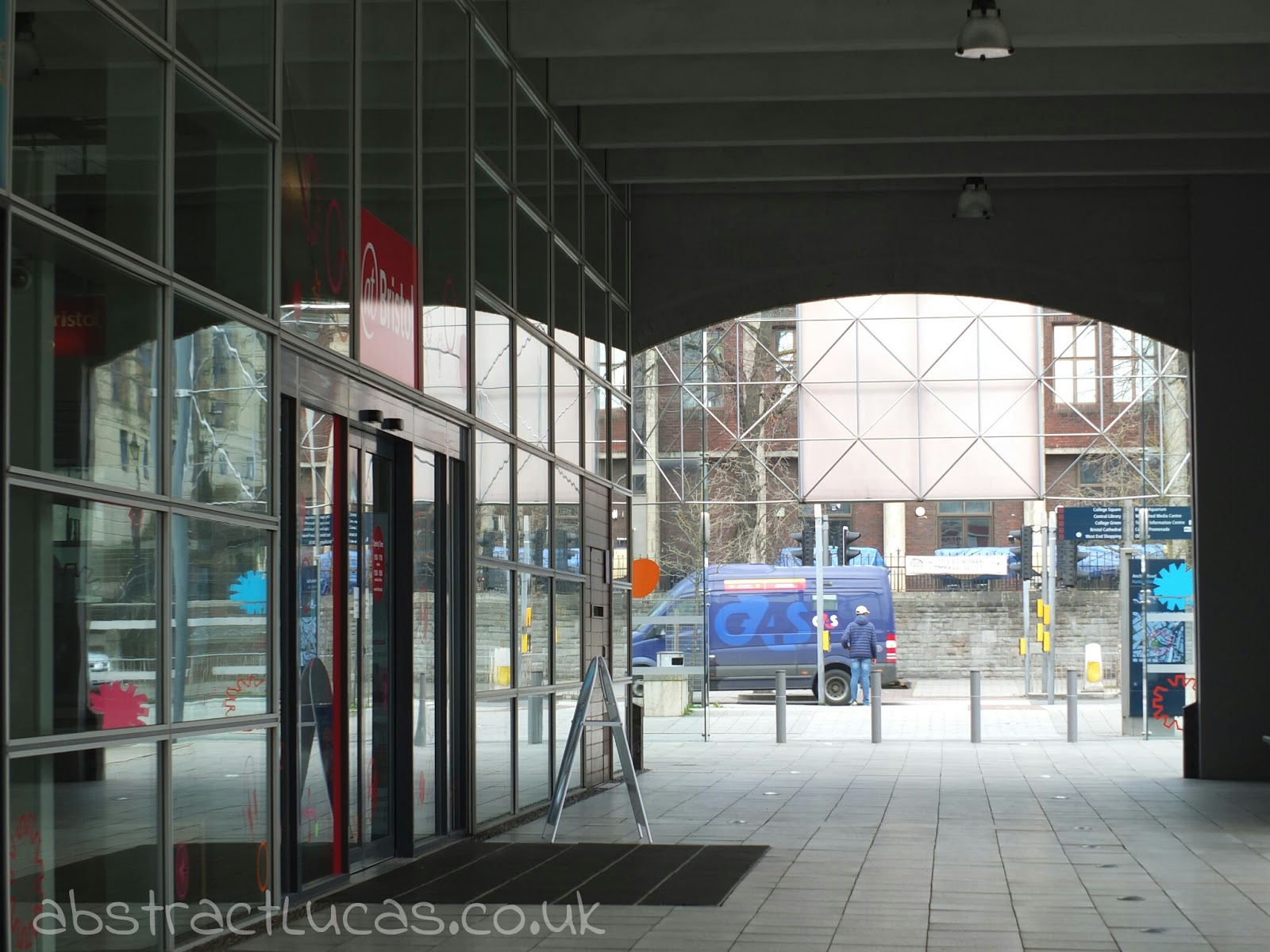 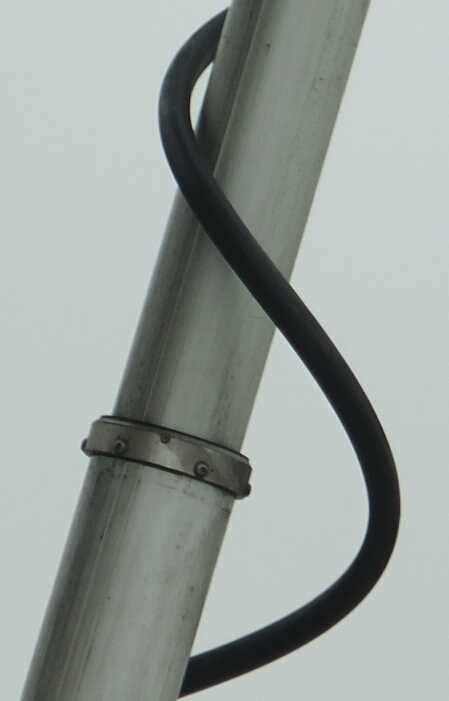 ... and I was set a challenge, and I'm not great at turning those down, so here's my name in alphabet photos -

I think I might set myself a photo project challenge - to get the whole alphabet, upper and lower case - what do you think?