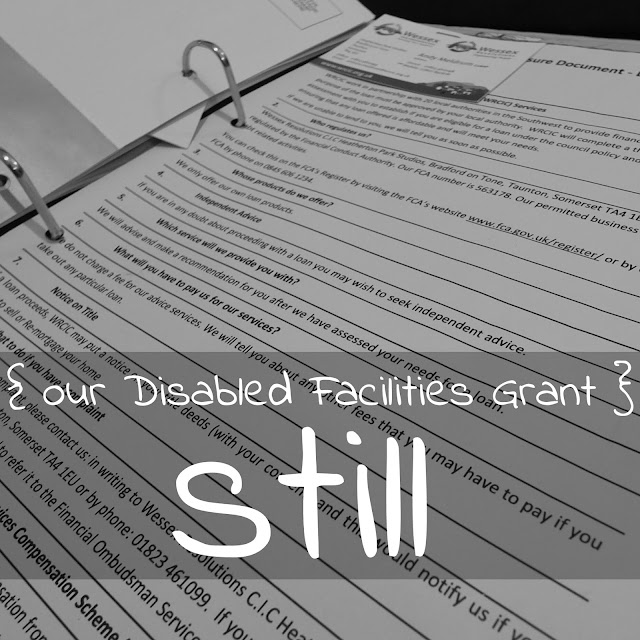 The lack of momentum with Smiler's bedroom and bathroom is starting to get to me - we seem to be standing still.

I think we're at the final stage with the paperwork, but I've thought that before, only to get a 'yes, but' type email or phone call about something else that has to be done before we can start.  That dream of moving into our house with Smiler's bedroom with his things in and bathroom of his own complete with the equipment he needs seems to be moving further and further away, even though surely surely it must be getting closer as time passes and the process plods on.


Before Bristol City Council will award the Disabled Facilities Grant, you need to demonstrate that you have the rest of the money in place to complete the work.  With a maximum of £30K from the DFG, we needed to prove we had the rest - the other £26K.  The council Accessible Homes Team referred us to Wessex Resolutions, a "community interest company", who basically look at your income and outgoings and do a slightly less tick box style assessment than traditional high street lenders. This meant that Mr and I found ourselves sat in front of a representative of Wessex, asking to borrow the maximum £20K, surrounded by bank statements and letters and bills, with our fingers crossed.  Although several different councils use Wessex, Bristol has an amount of money set by so that while they don't award the discretionary DFG top up that other councils might, they instead pay the interest on loans from Wessex taken out to pay the shortfall on DFG works.  We were given a decision in principle that day that we'd been approved for the £20K for 15 years at 0%, so emailed the surveyor and attached a photo of a bank statement which showed that we had the rest of the amount covered.


This is where even more red tape ridiculousness comes into play, along with pointless paper pushing.


At the very beginning of this, way back in August when I first spoke to the surveyor he told us to get two quotes for the work, he and his manager would look at them, then approve the grant.  We gave two quotes, they told us to get two more because these were so high, and use one of their preferred companies.  Did that, and it was even higher.  Told them we wanted to go with the first (and cheapest) quote, then we're told we need to demonstrate all the money is in place before approval can be granted.  I specifically asked at that point if there were any more steps, whether the file would then have to go on to someone else to be approved, and I was told no, it was just a case of he and his manager agreeing to award the grant.  So we sorted the loan, showed the the rest of the shortfall was covered, and then got a pre-approval DFG letter by email to sign and return.  Did that - literally printed / signed / scanned / emailed back within five minutes, then heard nothing for a week.  Last contact was a short email from the surveyor on the 19th, telling me he had "started the ball rolling to get grant approval".


Still don't have an approval letter, still - presumably - not yet awarded the DFG,  so still, according to their policy (which I've been asking to see for three weeks) not able to start any of the work.  And in the meantime, still carrying Smiler up the stairs to use the bathroom.  Still lifting him in and out of the front door.  Still carrying him to and from the car.