Why I love my earphones 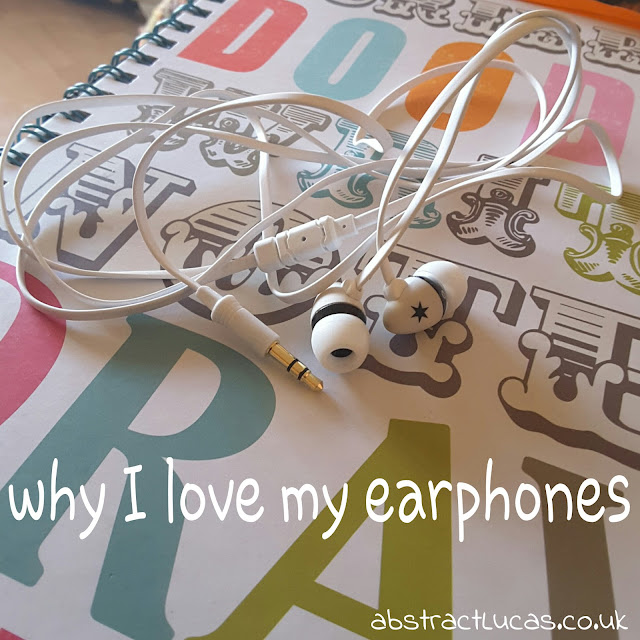 Like a lot of people, I've been accustomed to a certain level of background noise while I'm getting on with whatever I happen to be doing.  Whether that meant having the radio on when I'm cooking, a favourite playlist on repeat while I was studying, or the TV on while I did household paperwork, I kind of needed it - it helped me to focus.

The Brain Cloud changed this completely - any sounds while I was trying to concentrate would throw me completely - I just couldn't follow a train of thought.  I could be halfway through a sentence and Eli would bark, I'd stop talking and Mr would be left in suspense - 'and then what?' - I couldn't remember what I'd just said, never mind what the next sentence was going to be.  I couldn't handle a conversation with two other people - trying to skip between two people talking - often, as conversations tend to, interrupting and talking over one another - I just ended up utterly confused.

Other times I would be listening to someone, hearing the individual words that they were saying, but not understanding what they meant.  I don't mean I didn't understand what they were getting at, I mean I didn't know the words they were using.   It was as though they were speaking in a foreign language - I could hear them, I just couldn't get their meaning.  As you can imagine - hugely frustrating for someone whose job relied on good communication skills, and picking up on what was going on between the lines.  Irritating for everyone around me too of course - cue several years of eye rolling, deep sighs, and "I've already told you this mummy.  Twice".

I gave up trying to watch TV as it was too difficult to keep track of what was going on - my memory was atrocious anyway, so I could take the kids to the cinema in the morning then suggest that afternoon that we went to see the same film - they would tell me what happened and it would not ring even the smallest bell in my mind.  The words spoken on screen seemed to stream straight out of my head - they just didn't stick.  I had to concentrate on the actors faces to remember who they were, and it was as if my brain could only deal with one input at a time - if I was focused on what I was seeing, I couldn't hear anything.

Another aspect to the intermittent disconnect between my ears and my brain was the times that info did go through, but seemingly at a hundred times the volume.  As soon as anyone raised their voice or got even a little annoyed, it was as if they were screaming into my face - I was completely overwhelmed.  You know how some people have issues with certain sounds - nails scraping on a blackboard, that kind of thing?  It creates a physical reaction, and often an emotional one too.  If anyone got annoyed, I started to have a panic attack - I couldn't breath, I felt sick, I would shake and turn pale.  And I don't mean if people were having a screaming shouting argument - I mean when Petal would grumble about whose turn it was to brush the dogs teeth.

My hypervigilence caused all kinds of problems, but the over sensitivity to sound meant that I jumped out of my skin at any unexpected noise.  The doorbell going or the phone ringing was like torture, to the extent that my phone was in a drawer for a year, and the doorbell was unplugged because I couldn't control my reaction, having panic attacks daily and the panic attacks were happening every day.

It wasn't until I was talking to somebody last year about Smiler's Sensory Integration Disorder that I suddenly made the link between my extreme reactions and confusion and the fact that they were all triggered by, or related to, auditory input.  It was as if the clouds had parted - now that I had realised the common factor involved with many of my meltdowns, I could do something about it.

I tried a few different types of ear plugs before I found some that muffled sounds enough to make them managable without cutting them down to a level that I couldn't hear enough to understand what was being said.  Now if I'm going somewhere I know will be noisy but I won't need to pay attention to the sounds - a supermarket for example - I put in earplugs before I go in, and return them to a little case in my pocket when I get to the till.  If I'm having trouble following a group conversation I asked people to slow down, and tell them I have Auditory Processing Disorder (a sense specific type of SID).  Practising techniques I've learnt help lessen the panic responses I have to other people getting angry or annoyed, and putting the subtitles on whenever I watch the TV means I can (mostly) follow what is going on.  When I need to concentrate, I put familiar music on so it blocks out any unexpected sounds.  Usually earphones, usually loud, it means I can cope with being in the same room as other people.

Right now, for example, Noah and Petal are playing a complex version of Monopoly Deal, with extra rules that they've agreed before they started.  As well as the obvious shouts of joy and annoyance when each of them gains and loses millions, I know 'heated discussions' are likely to break out.  A year ago I would have either left the room, realising I wasn't going to be able to handle it; or stayed put, and ended up upset or panicked or annoyed when the inevitable happened.  Instead, I pulled out my earphones and started a playlist that I know will overlay the sounds they're making, so I won't crumble {Nickelback, by the way. Nice and shouty}.

If I hadn't been able to work out ways of managing, I don't know where I would be right now - very possibly hiding from the world (and the kids) in bed, or maybe somewhere else completely, unable to be around the people that I love.  That's one of the aspects of PTSD that ends up being so isolating - when you can't make sense of what is going on around you, and every instinct you have is telling you to run or fight, when that might well end up making everything so much more difficult.  My earphones mean I can be around people - it's as simple as that.