The Problem of The Stairs, and (fingers crossed) the solution.

So, after getting the DFG approval last week I decided I had to get on with the getting on, and make a start.

The builder, however, disagrees.

I'm fighting urges to choose his bedroom furniture and take up Smiler's curtains and start painting, but we are nowhere near that stage yet (as Mr keeps reminding me), and as patience is not my strong suit I began looking through the schedule to see if there was anything I could be getting on with.

What I came up with was, disappointingly, not an awful lot.  But, you have to start somewhere, every journey begins with a single step, and all that jazz.

Our first step was placing an order which will - hopefully - sort The Problem of The Stairs.

The Problem of The Stairs

When we moved into the bungalow Smiler was two, Noah was one and I was (very) pregnant with Petal, so none of them have ever known stairs.  In fact, I remember taking Noah and Petal to places where there were steps so they would get the hang of them, after Noah started nursery and I watched him struggling to climb the few steps to get in.  It sounds daft, but they had just never encountered them, thanks to always having Smiler along with his wheelchair which meant (as usually it was just me with the three of them when Mr was working) that we had to take the lift in shopping centres and if there wasn't a lift - well, we just didn't go there.

Though they have developed in confidence since then (obviously), stairs are still something of a novelty - here's Petal the day we bought the house, very very wary of the plastic the previous owners had put down... 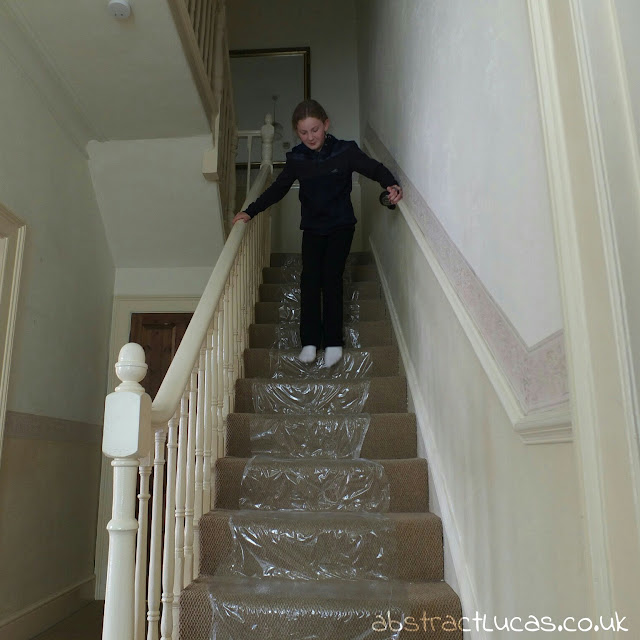 The original idea to solve The Problem of The Stairs, courtesy of the OT, was to put a bloody great safety gate at the bottom, but Mr and I nixed that idea pretty sharpish.  We want Smiler to learn not to try and climb the stairs without supervision and support, but to physically block them impacts everyone - me running up and down with washing, Noah flying his radio controlled helicopter around, Petal encouraging Eli up the stairs to brush his teeth.  I hate distributing everyone's clean washing at the best of times (housekeeper of the year I am decidedly not), but the idea of trying to juggle a couple of armfuls of laundry while undoing a fiddly baby gate (that probably takes at least two hands to open at the best of times) and then trying to get through it (without tripping over) and then closing it behind me - well, I was looking for an alternative, put it that way.

I was told about 'break beam' alarms that are sometimes used as a safety aid with individuals with dementia.  An alert that is triggered when - for example - an individual leaves a safe area of the house.  A bit more general googling and another chat with the OT, and I had a few suppliers to check out, the stand out front runner of which was EasyLink UK.

EasyLink are able to put together customised sets of call buttons, break beam alarms, movement sensors and all manner of other cleverness, and were hugely knowledgeable when I spoke to them on the phone several months back.  They recommended movement sensors rather than break beam alarms, and also provided advice about help buttons, which was something else we'd considered but didn't know where to begin looking.  I got back in touch last week and placed the order for Smiler's set-up, which all link to a pager - when it goes off, a message comes up telling us the trigger, so we know whether he's left his bedroom, or gone into his bathroom, or pressed his bedroom or bathroom alarm button.  This lets us know whether we have time to pull on a dressing gown and feel around for slippers, or whether we both need to tear downstairs sans modesty because he needs us right this second.

Well, that's the plan at least.  When it all arrives in a few weeks and we get to try and set it up I'll let you know how it goes!