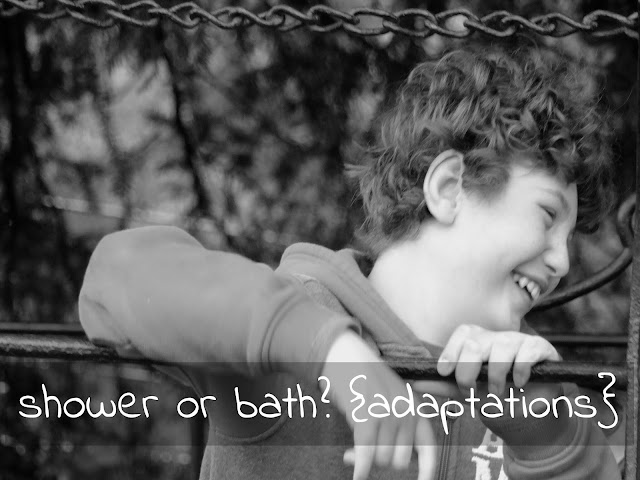 Although choosing the toilet was a biggie, we knew that very early on in planning the adaptations we needed to decide between a shower and a bath for Smiler's bathroom.  He loves baths, and right now in the bungalow we have an ordinary bath with a shower over it, so at first glance the decision should be easy.  However, nothing is ever that simple of course!

Bath vs shower - things to consider


Having a long soak in the bath is an enjoyable activity for Smiler, as well as providing lots of opportunities for sensory activities, fine motor skills and so on but a bath would take up a significant amount of the floor space we plan to turn into his bathroom.  When in the bath Smiler has to have someone (literally) right next to him the whole time as he will happily slip under the water then be unable to get back up (in addition to risk of seizures) - being supervised every second impacts on his privacy / dignity.  Getting in the bath is challenging for Smiler, and gets more so every year - I cannot physically support him by myself, it takes both Mr and I to get him in and out.  His size and weight mean that he probably ought to be hoisted, which he hates with a vengeance.  I worry sometimes that if he did have a seizure in the bath I wouldn't be able to get him out on my own.  A shower offers more opportunity for Smiler to develop his independence - he can physically access it without support from anyone else, and we don't need to be 'eyes on' the entire time he's in there.


[I feel like I need to explain that this doesn't mean Smiler will be unsupervised, just that we can chat to him from around the corner perhaps instead of having to be right beside him watching him every second - I don't mean he's going to be left to get on with it by himself - unless of course he reaches a stage where that is safe for him]


Having gone back and forth a bit, we decided that a shower would be the best option.  There is a bath upstairs that Smiler can use as a treat on occasion, and for us the independence angle is a biggie - we want him to have as many opportunities as possible to practice his self care skills.  So, a shower - but which one?  This turned out to be one of the more straightforward decisions, thankfully, partly because there aren't actually choices on the market that would work for Smiler.  We started the research by visiting the Home Independence Centre in Bristol, run by Care and Repair.  They have stacks of pieces of equipment there that you can take a look at and ask questions about - bathroom displays, kitchen stuff, all sorts.


They had a few different shower units, but it was very clear very quickly that most of them would be simply too complex for Smiler to operate independently, aimed much more at older people who struggle physically with the controls rather than individuals with intellectual disabilities.  The exceptions were the Redring Selectronic range, and the AKW Luda range, both of which feature simple (well, simpler) controls as well as other elements from our 'must have' tick list such as thermostatic control (so even if other taps or whatever are turned on elsewhere in the house the temperature remains constant) and an extended riser rail (so there is enough adjustment possible for Smiler to use it if sat on a shower seat or stood up). 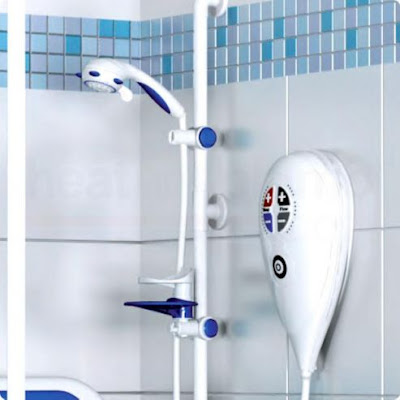 I chatted to a few people who have the Luda and though (when it's working) it seems to function well, with three set temperature programmes and large push button controls, they reported that it seemed to have a fairly short life cycle - one had only lasted for just over two years, which doesn't seem long enough for a shower unit that cost over £300.  I also heard about a number of faults that families had experienced and, although of course this is all anecdotal, I couldn't help feeling wary of something that several people warned me away from. 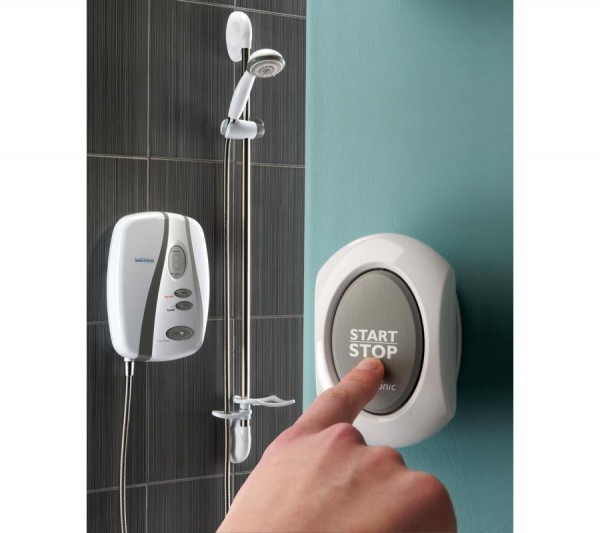 I tried to keep an open mind while I looked into the other contender, the Scelectronic range, but pretty much liked it more the the more I found out about it.  The controls are *fingers crossed* Smiler-able, with a large start/stop button, and then two more push buttons marked 'warmer' and 'cooler' - writing colour coded red/blue, and textured + and - symbols on the buttons.  On installation you choose a temperature range that these controls won't then take it out of, and there is a large LCD display which shows the temperature.  The shower has numerous spray patterns can be selected by twisting the handset, a two metre hose, and one metre riser rail.  It also has a separate on/off button - kind of like a remote control.  Not sure how much we'll use it to be honest, but I can imagine it will be handy to be able to turn the shower off from outside if Smiler has had a fall or a fit in there, so we don't get drenched getting him out, as well as those times he doesn't want to get out because he's too busy enjoying the warm water...


The electrician told me I needed to find the 9.5kw version, so I got the model number off of their website and searched for that - otherwise it can be easy to get excited at finding a great price only to find that it isn't exactly the version you were after.  So I've heard.  Ahem.  Anyway, the price varied quite a bit, from £269 to £457, so it definitely pays to shop around.  I ordered from showerstoyou, as the £269 was the most appealing to me (surprise surprise) and it was delivered two days later - no faff, no fuss.

As for how it looks when it's up, and how it works out for Smiler - I'll let you know.