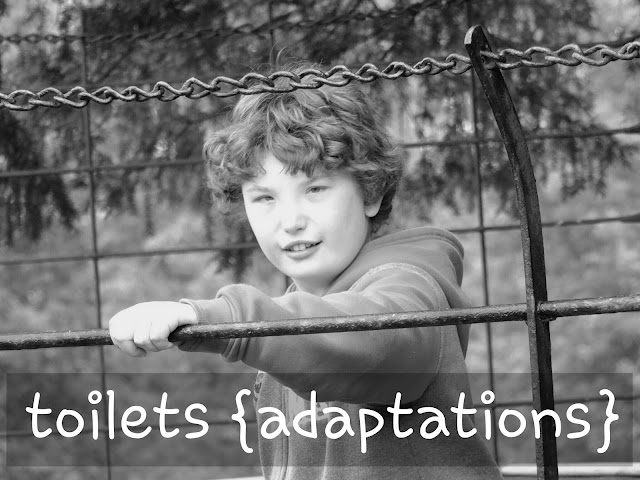 Smiler has, fairly recently, begun using the toilet.  To most people this is no big deal, but if you have or know a child who has been in pads so far past the usual point at which this progression is made, you will get what a massive step this is.  It is not something that anyone working with him really thought was going to happen, though some people who are less aware of this side of life made helpful suggestions such as 'well why don't you just put him in pants and see what happens?'  Answer is, I know what would happen.  Exactly the same thing as if you put a six month old baby in pants to see what happens.  You end up with someone sitting or laying in a puddle, soaked to the skin, not understanding what is going on.


Anyway, Smiler now wears pants and uses the toilet during the day.  His balance and coordination mean he doesn't do the usual man-ish thing of standing and aiming, so he sits instead.  As amazing a progression as this is, we are also aware that the time it will take for him to get the knack of all the other related skills mean he won't be truly independent in his toileting for years, if ever.  Reminding him to go, suggesting that he 'try' before we go out, assisting with his button and fly, helping him pull down his trousers and pants, lowering safely to the toilet seat, wiping him when he's done, pulling up his pants and trousers, doing up his zip and button, putting soap on his hands, turning on the tap, rinsing his hands, turning the tap off, getting a towel for him to dry his hands with - there are still a lot of aspects of toileting where he needs our help.  By looking ahead and chosing what is going in to his bathroom to enable him to develop these skills or other ways around the barriers to his independence we can increase his dignity and make things easier for us too.


The priorities here include Smiler's dignity, his cleanliness, but also the difference this makes for us as his carers.  The most obvious example is wiping Smiler after he has used the toilet - remember when your toddler or young child would shout for your help with this?  Remember how they gradually got the hang of it themselves, and how you suddenly thought back one day and realised that they hadn't called for you in ages, and they actually didn't need you to help them anymore?  Well, how old were they?  Smiler is fourteen, and even if he doesn't understand the social conventions that make this uncomfortable for the rest of us, it's no one's favourite bit of providing for his care needs. 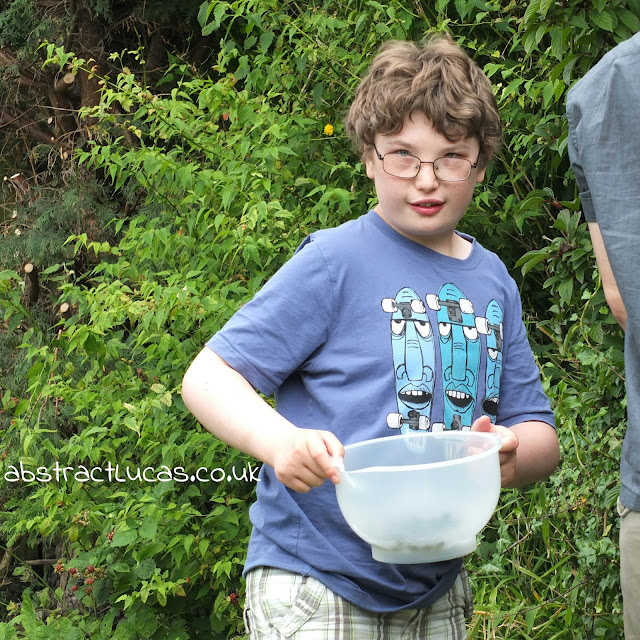 So, it turns out that there are such things as 'wash and dry toilets' which - as the name suggests - wash and dry the area in question.  Bit weird, yes, but only because it's so unfamiliar to us - apparently they're hugely popular in Japan, where the density of inhabitants mean the sewage system struggles to cope, but these toilets, which wash you with a gentle stream of water and then effectively blow dry your bum, negate the need for toilet paper which in turn reduces the risk of drains blocking.  Although many European countries are big on bidets (which do a basic version of the washing function) they aren't common in the UK, which means they are still aimed primarily at the 'special needs' market (though one of the manufacturers below are clearly trying to alter that perception).

There are two manufacturers, Closomat and Geberit, which make these toilets.  Closomat are the old hands, while Gerberit are comparatively the new kids on the block.  Having talked to the OT (who told us each brand had it's own strengths) we decided to get in touch with both companies, make arrangements for the reps to visit, and do a little research on our own in the meantime.


Closomat offer a single model in a choice of either floorstanding or wall hung.  The floorstanding incarnation - the palma vita - can be customised with various options, such as support arms, plinths (to raise the overall height of the toilet) and a padded seat along with a few choices of how to trigger the wash and dry function.  The default trigger is elbow press pads, so you kind of move your elbow backwards when you're finished to start the cycle, but these can be deactivated and replaced with a push button remote or proxy switch (triggered by movement near the sensor). 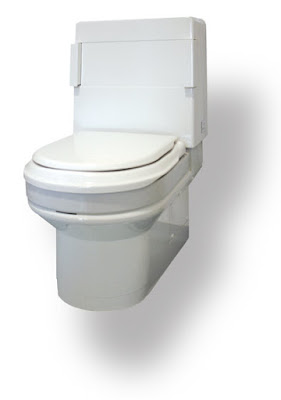 Geberit have the Aquaclean, which has a range of models, enabling you to retrofit an existing toilet or start from scratch.  The model we were interested in was the Aquaclean 8000 plus, which is the poshest one they do - but of course!  It works on the same basic premises as the Closomat - an arm (for want of a better word) extends from the edge of the toilet bowl, sprays you with water and then retracts, and then "a warm puff of air gently dries you off".  You start and adjust the cycle by using the buttons on the side of the bowl, a proxy switch, or remote control. 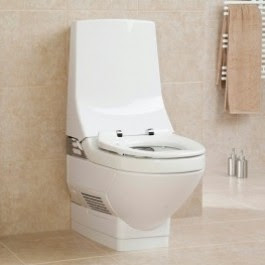 
We were visited by a rep from each company, and while Closomat came with a scale model while Geberit brought a life size version.  It's a bit odd - I suppose because toilets and associated bodily functions are so taboo in society it's not something that comes up in conversation often, so having someone visit your house for the purpose of discussing toilets, and bringing a toilet with them - well, I'm sure it gave the neighbours something to wonder about, put it that way.

It was the adaptability of the Gerberit that swung it for us in the end, along with the associated cost considerations.  With the Geberit you can adjust the length that the arm comes out, as well as the water pressure and temperature, using the remote, then set a user profile so the adjustments are saved.  With the Closomat, these have to be set at installation and can only then be changed by an engineer, which means you have to fork out for a service call every time they need adjusting because Smiler's needs have changed.  After all, he will grow, which may well change where the best position of that arm will be.  We're also conscious that this is going to be something new for him, so want to start off with a very low pressure wash, and then gradually increase it over the first few weeks so that it reaches a level where it is effective, but not uncomfortable for him, and that acclimatisation may take a while.  The alternative, having to set the pressure at the start and then that's it, might mean he sits on it once, freaks out, and then refuses to sit on it again. 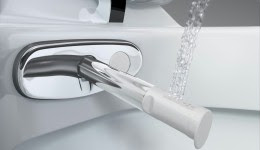 The triggering mechanism was another consideration.  The elbow pads on the Closomat wouldn't work for Smiler as he would likely trigger them unintentionally, and can you imagine?  Being halfway through ... what you're doing, then suddenly your nether regions are being washed? 😮  Although the Closomat did have other triggers, all of these were extra options which incurred an extra cost, while the Geberit had the proxy switch and remote control included.

The Geberit is available through a few different suppliers, and are meant to be pretty easy to install, but we're getting a (relatively) local company to come and install it - thinking being that they've done loads before, so the install is likely to go off more smoothly.  The cheapest I found the toilet itself for was £2584 from here (price not including vat, as it's vat exempt if you meet the conditions - a post about this coming soon!), and the quote we got for supply and installation (again, not including vat) was £3250.  I feel a bit sheepish about the cost - I've had a few raised eyebrows when people have heard how much it is, and assumed that we must be loaded to be paying over three grand for a toilet, but I'm kind of assuming that if you've read this far you probably get that it's not that straightforward.  As to how the installation goes, and how Smiler gets on with it, I'll keep you posted!

(Off on a tangent)


See, this is why writing this was a good idea.  In browsing the Geberit website looking for quotes and photos, I found that the model we want, the floorstanding version, is no longer on there.  I've tried to ring the company that quoted us to install it, but they're closed.  And while the quote they provided  (back in August) doesn't specify it is for the floorstanding model, not the wall hung model, I asked them for the spec our builders need in order to get everything ready for them to come and do the installation, and the spec they sent - last week - does say this.  Might not sound like much of an issue, but since the builders spent last week digging holes and fitting a new soil pipe which, if we have to go with the wall hung model, will be in completely the wrong place, trust me when I say it's a problem!  Geberit got back to me on Twitter (love Twitter) that the floorstanding model is still available, so panic now over.