Smiler and the lack of hormones 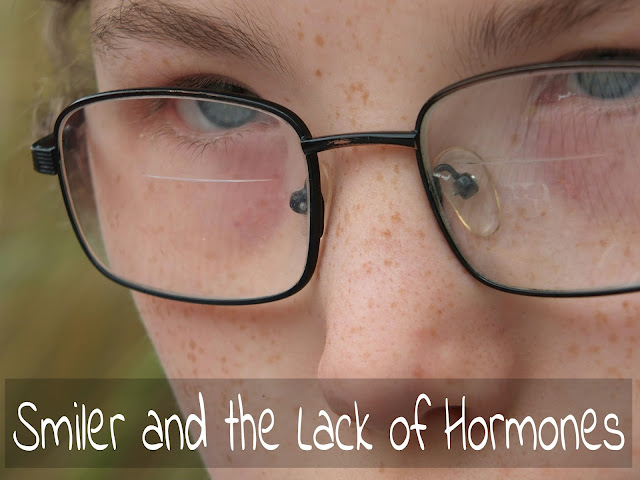 I grumble about my kids and their hormone invasions, as I guess most parents do.  Noah has needed a new pair of school shoes every term this school year, and I don't mean old terms, when there were three in a year - I mean new terms, six week terms, and he's now - having just turned thirteen - in a size ten.  Petal is almost twelve, and some days she cries if you look at her wrong - sensitive is an understatement!  Smiler, although he's the oldest of the bunch, is still a hormone free zone, which brings with it its own challenges, and we're getting towards decision time.


Mr and I have weighed up the pros and cons for Smiler, and the pros list is pretty strong.  Timing is another issue that we're dancing with - Smiler's birthday is September, which means he's now 14 years 7 months old.  The average age for the very beginning of puberty - the start of the internal changes that aren't outwardly noticeable - is 9 years 6 months, which puts Smiler a little over five years behind.  It's difficult to try and put that to one side and concentrate on whether or not we should be treating when you feel like there's a clock in the back of your brain, ticking louder and louder.


During adolescence the bones become much denser, packing on strength so that the gradual decline that begins in adulthood doesn't develop into osteoporosis for many many years.  Of course, if that early increase in density doesn't occur, the slide into osteoporosis is hugely accelerated.  Smiler has issues with his skeletal system anyway - a permenantly dislocated and fused elbow joint, (surgically corrected) bilateral dislocated hips, relatively mild scoliosis, and his jaw regularly dislocates on both sides at once, locking open when he yawns.  With all this going on already, we know that the weakening of his bones combined with his atrocious balance is likely to result in many many broken bones in the years to come, each bringing with them pain and confusion,  probable general anaesthetics for them to be assessed and plastered, and then the impact on his life while he's in cast, time off of his feet if it's a leg or ankle, physio for however long it takes for him to build his strength back and return to normal.  It's a lot - and by dosing him now we can minimise his risk.


It might sound harsh to someone who isn't experienced with people with intellectual disabilities the level of Smiler's, but his future fertility and sexual function are not factors that we're taking into consideration.  Statistically he's very unlikely to be fertile anyway - individuals with genetic conditions like his usually aren't.  The issue of his function - well, on a purely physical level, his coordination is so poor he can't get his foot into his shoe without help, but it's the capacity to consent side that rules it out as far as we're concerned.  While his exact level of understanding is difficult to ascertain, his official diagnosis is of a severe learning disability - that puts his IQ between 20 and 35.  If he can't understand, he can't consent, so any such relationship would by definition be abusive.


As well as physical changes, during adolescence hormones trigger psychological and emotional changes.  Some of these are obvious - the stroppiness for example - but there are other things going on too, such as greater development of impulse control.  Right now, with no hormone surges, Smiler isn't experiencing these effects, so intellectual disability aside, his understanding and behaviour are still immature.  He gets very excited very easily, and finds it difficult to calm down.  In a lot of ways, he's like a ridiculously overgrown toddler - he falls over (often), laughs hysterically for ages when something tickles his funny bone, needs lots of reassurance when he's anxious.  Without providing the hormones artifically that his pituitary gland would ideally be producing itself, these changes just won't happen, which means that he'll remain - emotionally - a child.


Having gone through the process of wondering if there's a problem, starting investigations, having the suspicions confirmed (isolated gonadotrophin deficiency to be exact), deciding whether to treat or not, we're now at the point of wanting to know more about the treatment options.  The front runners seem to be daily applications of testosterone gel or (painful) intramuscular injections every three to four weeks - neither of which is exactly appealing.  Not as bad as daily growth hormone injections though, which was a real possibility at one point, so I suppose we need to look on the bright side.  As to which route we end up going down - watch this space!