A fall and the aftermath

"Hi Lucas, it's David from school"


I didn't respond yet, waiting to hear the usual 'Smiler's fine" first, but it didn't come.


There was a certain tightness to David's voice, and although of course the head teacher of a special school is always under pressure, juggling budgets and staffing and LA and paperwork and building issues, he is usually able to keep a lid on it, and generally sounds pretty calm and laid back - but not today.  The distinct lack of immediate reassurance made me stiffen in my seat as all thone dreaded possibilities flashed through my mind - a seizure?  A bleed?  Something else altogether?

"Smiler's had a fall in the playground.  He has two first aiders with him, but it was eight minutes ago and we haven't been able to get him up yet..."


What do you mean, haven't been able to get him up?  Did he hit his head?

"No, no, not exactly.  He fell forwards - well, actually he was pushed by another student, which doesn't really help - but he'said very upset, and he doesn't seem to be able to use his arm...  Everything might all be fine, but I just wanted to let you know what was happening.  I'm going straight back out to him now, and I'll ring back on this number in five minutes."


Twenty five minutes later we met staff and Smiler at the local A+E.  They'd had to hoist him from the ground into his wheelchair as even his favourite adults had been unable to convince him to let them help him up, and he'd been crying in pain the whole time.  It wasn't difficult to see why. 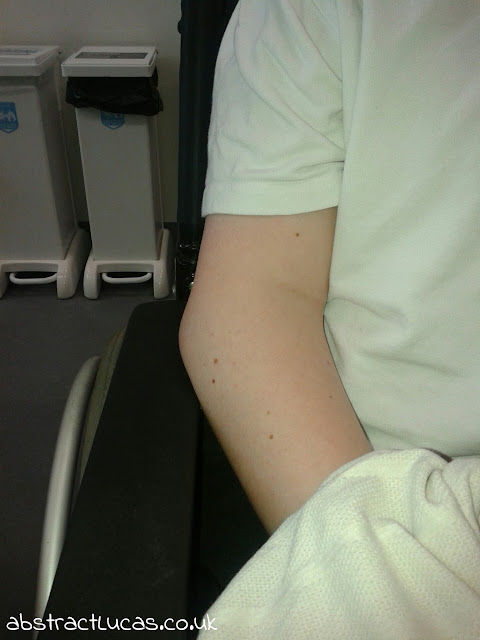 Smiler's left elbow has been dislocated and fused in place since birth, and so we've always been used to it not looking like an ordinary elbow, but his right - well, it's hypermobile, but generally elbow shaped.

An hour later an x-ray had confirmed his elbow was not only dislocated, but also fractured.  Unfortunately the A+E we were in couldn't sedate him to relocate it, so ordered a patient transport ambulance to take Smiler and I to the Children's Hospital which would pick us up within an hour.  By the time it actually arrived to collect us, three hours later, Smiler was exhausted by the pain.  Because of his haemophilia he can't have ibuprofen which would work on both the pain and the swelling, so he was only on paracetamol as he'd sneezed out the dose of dia-morph instantly it had been sprayed up his nose. 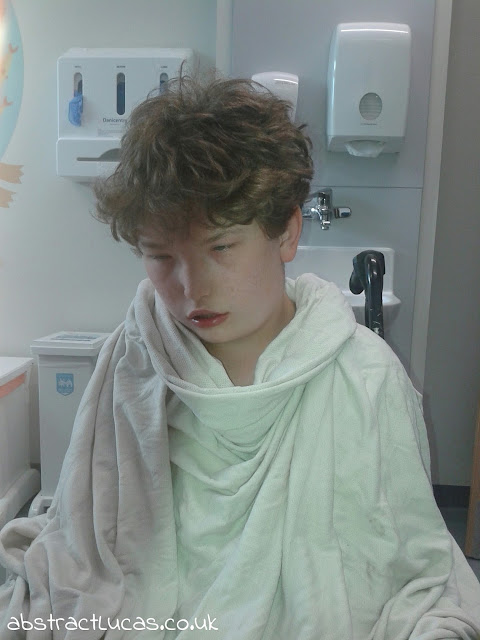 At the Children's Smiler was dosed up again but struggling still with the pain while the consultants debated whether to sedate him to relocate the joint or put him under a general anaesthetic instead.  By 11pm he had a slot in theater, and as per the usual protocols, an arrow was drawn on the arm that needed attention... 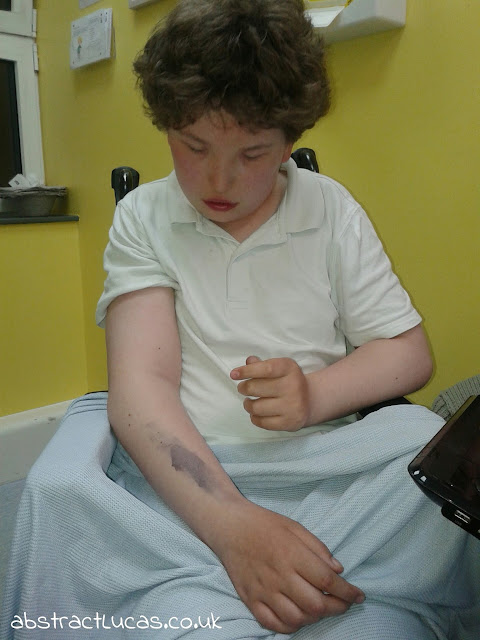 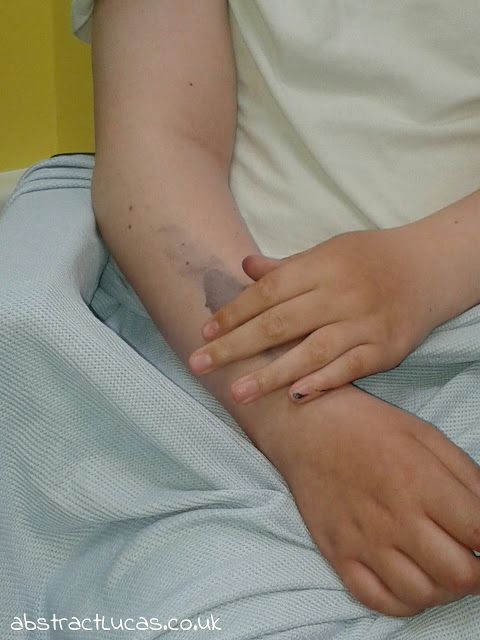 First a failed attempt to site a canula, followed by a successful attempt to put him under with gas.  Anyone who has had to hold their panicking child - teenager - down, while they're screaming 'No! No mummy! No!' as loud as they can while an anesthesiologist does their bit will know how much that hurts.  Three of us holding him down against the gurney, another steadying his arm while yet another tries to get the canula in - it was horrendous.

An hour or so later I was called to recovery, to find Smiler dozy but calm with his arm in a cast.  Lots of obs through the night as there was mention of 'limb endangerment' and 'potential nerve damage', partly because the joint had been out for so long before it was relocated. 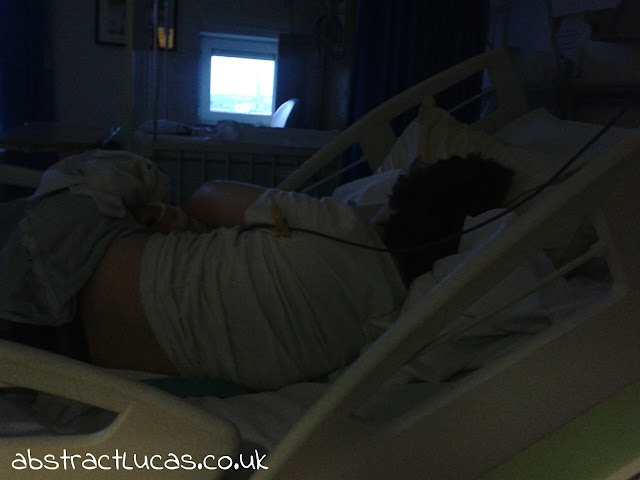 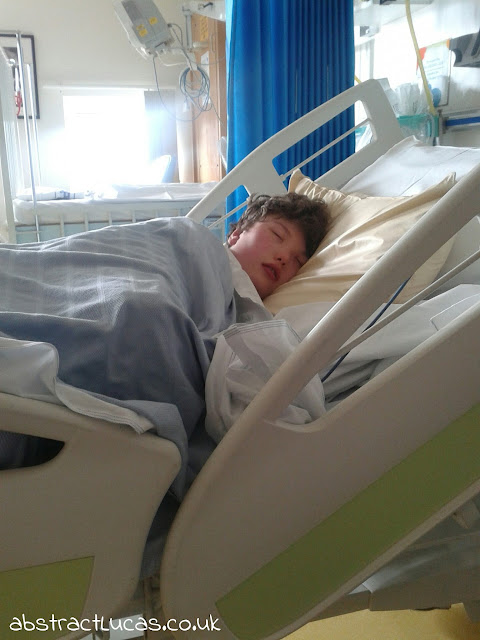 Next morning the orthopedic surgeon who'd got it back in checked in with us, letting us know that although the joint was technically back in place it was very unstable, and most likely has always had similar construction to his left elbow.  So, although it wasn't quite dislocated like his left, it was very much on the verge of it all these years, probably partially dislocating every time he straightened it out but clicking itself straight back in again.  Turns out that the most surprising part of all this is that it took so long for it to happen.

So now we're home.  He has a follow up next week which will include more xrays, the cast will be on for three weeks followed by a splint which will restrict his movement so that hopefully it won't pop straight back out.  By then we'll have more of an idea what comes next, which the consultant has warned may well be more surgery to position pins and plates to keep everything where it's meant to be.  Anyone familiar with conversations with consultants will know how vague and non-committal they tend to be, which I find hugely frustrating - I'd rather know the possibilities so that I can do some research, get my head around it.  By my reasoning the fact the Big Bone Cheese said he thinks it's highly likely that this will not be the end of it means it's pretty much a certainty, but exactly how big a deal this is going to be, I don't know.

Keep your fingers crossed for us on Tuesday - instead of going out to lunch to celebrate our 14th wedding anniversary, Mr and I will be at an outpatients fracture clinic with Smiler hoping everything is still ... well, not where it's meant to be, as it's never been there, but where it's accustomed to being! 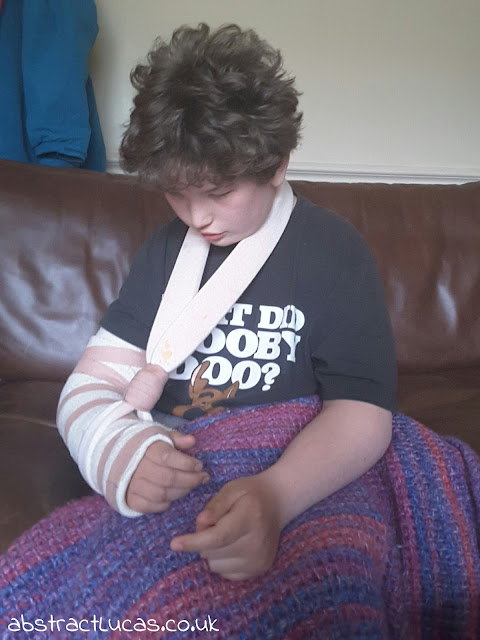 And in the meantime,  if you have any ideas on how to entertain a tired, grumpy and hurting fourteen year old who can't use his dominant hand or arm, let me know!

Get widget
at Saturday, June 18, 2016
Email ThisBlogThis!Share to TwitterShare to FacebookShare to Pinterest
Labels: Smiler's story