Moving from DLA to PIP when you're 16 : part two 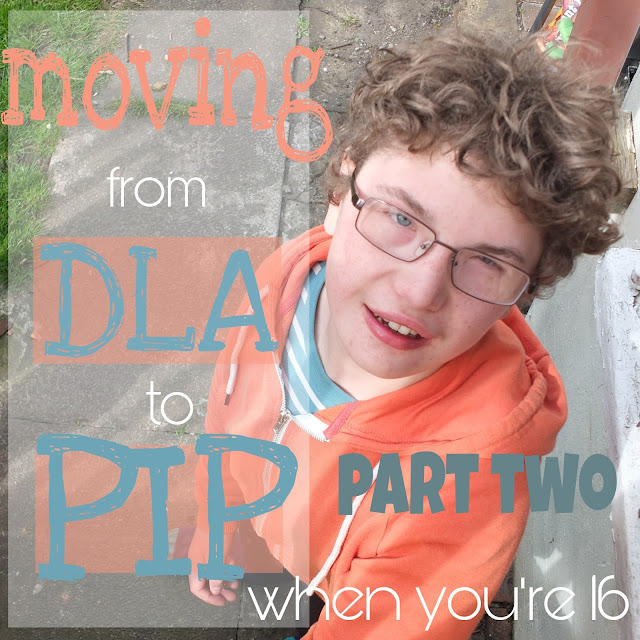 After getting the appointee sorted, everything went quiet for a couple of months - we celebrated Smiler's sixteenth birthday, and forgot about the whole PIP thing - until the next brown envelope landed in the postbox (about a month after his birthday).


This was addressed to Mr, and asked him to decide whether he wanted to make a claim for PIP on Smiler's behalf.  If so, he needed to ring the phone number on the letter to begin the claim, but should have plenty of info to hand when he made the call as they would be taking down the details.  Remembering the DLA form (all 42 pages of it) we made sure we had everything we could thing of, and I was there, tablet at the ready, to look up anything we ought to have to hand but didn't - you know, the GPs postcode; the neuro consultants secretary's extension number; the maiden name of the physio's next door neighbour.


The call was over pretty quickly - basically doing the identity checks, the fact that we wanted to make a claim on Smiler's behalf, and they had to read us a long "if you give us any info which is false and you know to be false or think might be false or think might be misleading then you will go directly to prison, do not pass go, do not collect £200" thing.  The very polite person on the phone explained that that was it, that was the claim made, and they would be sending out a form for us to fill in which explains how Smiler's disabilities and conditions impact his day to day life, which we would have a month to fill in and return.  Worth pointing out (which he did) that the month ran from that day of the phone call, even though it would take up to a week to reach us, but had to be returned on time or else bad things would happen.  I found it strange that the claim had officially been made without us giving any information whatsoever about Smiler's disability (yet), but it seems that's how they do it, so don't worry, or think that you must have missed something!  They did explain that if we felt we were going to need more time then we would need to get in touch before the date that the form had to be returned in order to discuss it with them, at which point they might be able to extend the date. Anyway, hung up the phone, shuffled all the clinic letters and things that we hadn't actually needed into the folder it all lives in, and waited for the next brown envelope.

As we had been told to expect, the form took a week to reach us, by which point I'd spent some time virtually wandering around the internet looking for people sharing their experiences and thoughts on the form.  This was, depending on how your brain works, either a great idea or a really really bad one, as all I could find were news articles and horror stories of a system that doesn't work and families exhausted by the experiences of contact with that system.  Mostly adults though - I couldn't really find anything out there about that transition from DLA to PIP for young people hitting 16, which is when I decided I'd write this all out once I had the brain space!

Something I think it's really important to point out at this stage is that if you've spent the last 15 years filling in DLA forms, you may well take a huge sigh of relief when you open the PIP form - it's so much more straightforward, and less likely to leave you fighting tears when you're finished, whether those are tears of frustration at the form or tears of sadness about everything your child can't do.  So that this post doesn't get too unwieldy I'll share some tips and pointers about the form itself separately, so if that's what you're looking for then I'll add the link [here] once it's up. Which it isn't yet.  Once Smiler's form was finished and signed we photocopied some clinic letters and posted it all off to the DWP, then tried to forget about it as we had no idea how long it would take to hear anything back.

Next thing was a phone call from the DWP about a month after returning the form, offering a time and day for a face to face assessment.  Although we hadn't requested it, they offered to come to our house to do it there - I'm not sure whether this is standard practice when it's a young person switching from DLA to PIP, or if it is because of his mobility issues, or LD even, but we accepted the offer, and had a date set a week later for the assessment.  Bit of a pain as it was within the school day, so Smiler had to stay home from school, but we wanted to get it over with and figured it would be easier without the other teens around.  The assessor was due at ten o'clock, but at five to we had a phone call cancelling, as the assessor was off sick.  Plenty of notice DWP, thanks for that.  Anyway, we were given a new date of nine weeks later, still at our house, and told that DLA payments would continue in the meantime, even if a final decision on PIP hadn't been made by the time the DLA award was supposed to end.  Smiler's was due to end in March, so it was a relief to know we wouldn't end up missing out if they took longer than they had expected to to do the assessment and make a recommendation.


The next post will cover the assessment itself, and the separate bit signposting you to some helpful resources for filling in the form, along with some of the things we've learnt along the way will be floating around here somewhere too.  In case you missed it, part one of these was about what happened prior to the phone calls and form filling, in order for us to be able to do the phone calls and form filling - namely applying to be and accepted as being Smiler's appointee for the purpose of dealing with the DWP.